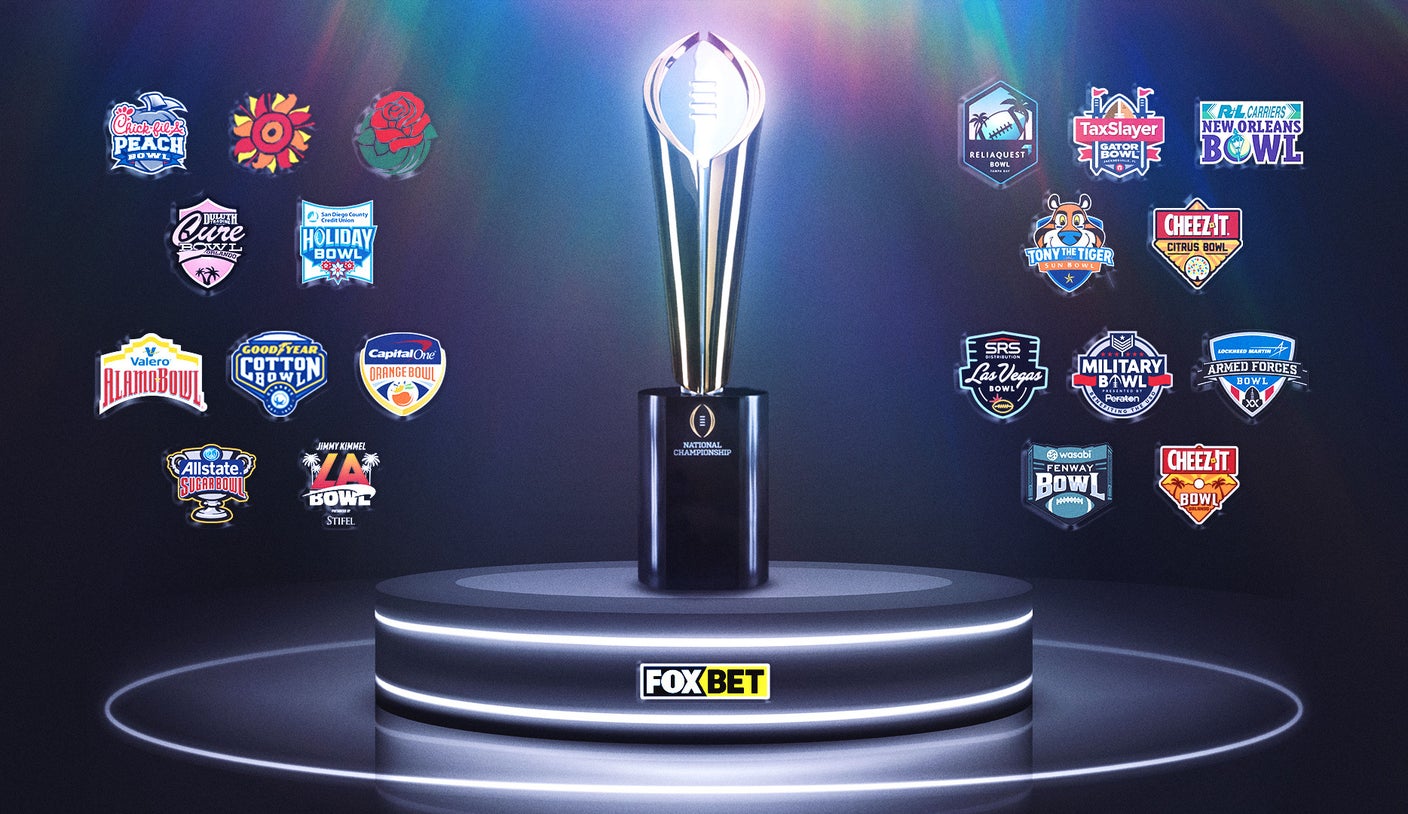 Bowl season is upon us! When it comes to the College Football Playoff (CFP), I’m predicting the No. 4-ranked Ohio State Buckeyes will play the No. 3-ranked Michigan Wolverines in the national title game.

As for the rest of the postseason fun?

I looked at every single bowl game from a betting perspective to give you my best bets for all the matchups.

Here is the complete bowl schedule, including my picks for every game.

Let’s get into all of it with odds via FOX Bet.

For times, viewing information and a live scoreboard, click here.

This game features two of the most underrated programs in the country. These are offenses that can and should score often. Take the Over.

PICK: Over 53.5 points scored by both teams combined at FOX Bet

The MAC champ will take on a program that’s in transition, with head coach Jamey Chadwell building for 2023. Lay the points.

RELATED: How to bet Liberty vs. Toledo

South Alabama is having a magic season. The Jaguars will finish it off right with a resounding win over Western Kentucky. I’m predicting a double-digit win.

RELATED: How to bet Western Kentucky vs. South Alabama

The Air Force Falcons average 330 yards and 36 minutes of possession. That’s not a recipe for scoring often. This game will be a slugfest.

PICK: Under 49.5 points scored by both teams combined at FOX Bet (at time of pick)

If the Ragin’ Cajuns can get their offense started, expect a shootout.

PICK: Over 58.5 points scored by both teams combined at FOX Bet

The Missouri Tigers lost four defenders to the portal, and Wake Forest expects to have its full complement of talent, including quarterback Sam Hartman who threw for over 3,400 yards and 35 TDs so far this season.

Wake will take care of business.

The Middle Tennessee State Blue Raiders pulled off an outstanding upset against Miami earlier this season and won their last three games. The Blue Raiders are hot and get the win in Hawai’i.

NMSU coach Jerry Kill also looks to win a bowl game as a head coach for the first time in his more than a three-decade career. It’s Jerry’s time to shine against Bowling Green.

Asking these programs to score early and often might be asking too much. Buffalo hasn’t scored more than 27 in a game since October, and Georgia Southern has only scored 30 or more twice in its last five games.

PICK: Under 67.5 points scored by both teams combined at FOX Bet (at time of pick)

Memphis is riding a wave of terrible form. The Tigers have won just two of their last six, so don’t look for them to get back on track during bowl season. Way too many points, take the underdog.

The thrill of notching a third-straight, double-digit winning season might not be enough for the Chants to overcome losing their change-agent coach Chadwell to Liberty.

The Pokes will play without longtime starter Spencer Sanders, and they also lost arguably their best linebacker, Mason Cobb, to the transfer portal.

While Wisconsin lost Graham Mertz to the portal, it’s running back Braelon Allen who makes the Badger offense go.

PICK: Wisconsin (-3 at FOX Bet) to win by more than 3 points

Duke quarterback Riley Leonard has been one of the breakout stars of the ACC. UCF, on the other hand, is licking its wounds after losing the AAC title game to Tulane.

The Jayhawks will walk into the Liberty Bowl mostly healthy. Arkansas comes into this contest with a lame-duck defensive coordinator in new UNLV coach Barry Odom and without two of its best players on defense in linebackers Bumper Pool and Drew Sanders.

PICK: Kansas (+3 at FOX Bet) to lose by fewer than 3 points (or win outright)

Both programs are severely depleted. Between Oregon and UNC, 16 players have opted out or have hit the transfer portal. On top of that, both offensive coordinators — UNC’s Phil Longo and Oregon’s Kenny Dillingham — are lame ducks.

It’s asking a lot of Bo Nix to lead the Ducks past UNC by double-digits, though.

The Red Raiders will have their hands full with Ole Miss running back Quinshon Judkins, who enjoyed the best season by a true freshman this season.

Behind Minnesota running back Mohamed Ibrahim, expect the Gophers to run the ball, eat clock and keep this game a low-scoring affair.

PICK: Under 42.5 points scored by both teams combined at FOX Bet (at time of pick)

If the Sooners can’t stop the FSU rush attack, it will be a long day for OU in Orlando. Alternately, the Sooners can pop quickly offensively. Either way, expect scoring in this game.

PICK: Over 65.5 points scored by both teams combined at FOX Bet

RELATED: How to bet Oklahoma vs. Florida State

Doak Walker Award winner and Texas running back Bijan Robinson will give this game some juice against Penix and the Huskies.

Both teams will score, grab the Over.

PICK: Over 68.5 points scored by both teams combined at FOX Bet

Without Devin Leary and lame-duck offensive coordinator Tim Beck, the Wolfpack might be in for a fight.

The Gamecocks are in rare form, with wins against Tennessee and Clemson to finish their regular season. They might not get the win over the Irish, but they’ll certainly keep it competitive.

Ohio came close to winning its first conference title in 54 years but fell just short against Toledo. Expect the Bobcats to take out their anger on the Pokes.

Tennessee quarterback Joe Milton will walk into this game looking to prove that he has the potential to fill Hendon Hooker’s shoes. But Clemson found its groove against UNC in the ACC title game.

The Tigers get the edge in the Orange Bowl.

10 Alabama players have chosen to enter the transfer portal or opt out, but none of them are Bryce Young. On the other side is Deuce Vaughn playing for Kansas State.

Expect K-State to keep this one really close. Mark this down as one of the best games of this bowl season, which is why I will grab the points.

Both teams will be without their starting quarterbacks. And both teams have earned reputations for having tough defenses. This won’t be a high-scoring affair.

PICK: Under 31.5 points scored by both teams combined at FOX Bet

Michigan’s rushing attack has been nearly unstoppable this season — even without Blake Corum in the backfield. That’s a tall task for Joe Gillespie’s 3-3-5 defense.

If you follow me on Twitter or read my columns on FOX Sports, you know how I feel about Ohio State.

If the Buckeyes are healthy, they should be able to give Georgia more than the Dawgs can handle. I’ll definitely take the points.

Illinois will have star running back Chase Brown for their date with the Bulldogs, and the Illini have made it their identity to run Brown and hold the ball. Illinois also has a strong defense. I like the Under.

PICK: Under 46.5 points scored by both teams combined

If Heisman winner Caleb Williams suits up against Tulane, the Trojans should hand the Green Wave just their second loss of the season.

The quarterbacks for these two teams, Garrett Nussmeier and Aidan O’Connell, have shown a propensity to sling it. If they both stay true to form, this game could be a high-scoring one.

PICK: Over 58.5 points scored by both teams combined at FOX Bet

The Nittany Lions will enter this game without star wideout Parker Washington and star cornerback Joey Porter, Jr. That might be too much for Penn State to overcome against the Pac-12 champs.

Utah by more than a field goal.

The Mean Green will play this game with an interim coach, and the Broncos have won their last three out of four. Don’t overthink this one, lay the points.

With All-American wideout Rashee Rice opting out of this game, SMU coach Rhett Lashlee and quarterback Tanner Mordecai will have to find a new go-to receiver against Big 12-bound BYU.

This will be close, take the points.

Will Hall’s Golden Eagles are on the uptick. As a matter of fact, one of their impressive wins this season was against Cotton Bowl-bound Tulane.

Southern Miss gets the bowl win over Rice and covers.

This matchup will feature two of the best quarterbacks on the West Coast, with Fresno State’s Jake Haener and Wazzu’s Cameron Ward. We also get to watch two of the West Coast’s best offensive minds at work in Wazzu coordinator Eric Morris and Fresno State head coach Jeff Tedford.

All this offensive explosiveness. Expect a high-scoring affair.

PICK: Over 53.5 points scored by both teams combined at FOX Bet

The Beavers are trying to notch only their second 10-win season since 2006. But they’re already poised to be a competitor on the West Coast next year. I like Oregon State to win and cover.

The Red Hawks gave up 180 on the ground to Ball State running back Carson Steele, and the Blazer boasts a 1,700-yard back in Dewayne McBride. Add to this Miami (OH) QB Aveon Smith is just a 49% percent passer and has 101 rushes this season.

I have a hard time seeing this game hitting over the total.

PICK: Under 44.5 points scored by both teams combined at FOX Bet

With Frank Harris announcing his return for a record seventh season, the Roadrunners basically have a pro at quarterback.

UTSA is looking for back-to-back 12-win seasons for the first time in school history before leaping to the American Athletic Conference next season.

Joel Klatt reacts to the Georgia Bulldogs, Michigan Wolverines, TCU Horned Frogs and Ohio State Buckeyes being the top 4 teams of the CFP.

Without quarterback Ben Bryant, the Bearcat passing offense took a step back. However, with both programs being run by interim head coaches, I don’t foresee a lot of scoring.

PICK: Under 44.5 points scored by both teams combined at FOX Bet

This will be a stress test for the JSU Tigers, whose coach this season, Deion Sanders, has already begun building his program at Colorado. However, NC Central got trounced by 30 by Campbell.

The point spread of 15.5 is a big number. Take the points.

RJ Young is a national college football writer and analyst for FOX Sports and the host of the podcast “The Number One College Football Show.” Follow him on Twitter at @RJ_Young and subscribe to “The RJ Young Show” on YouTube.

Download the FOX Super 6 app for your chance to win thousands of dollars on the biggest sporting events each and every week! Just make your picks and you could win the grand prize. Download and play today!