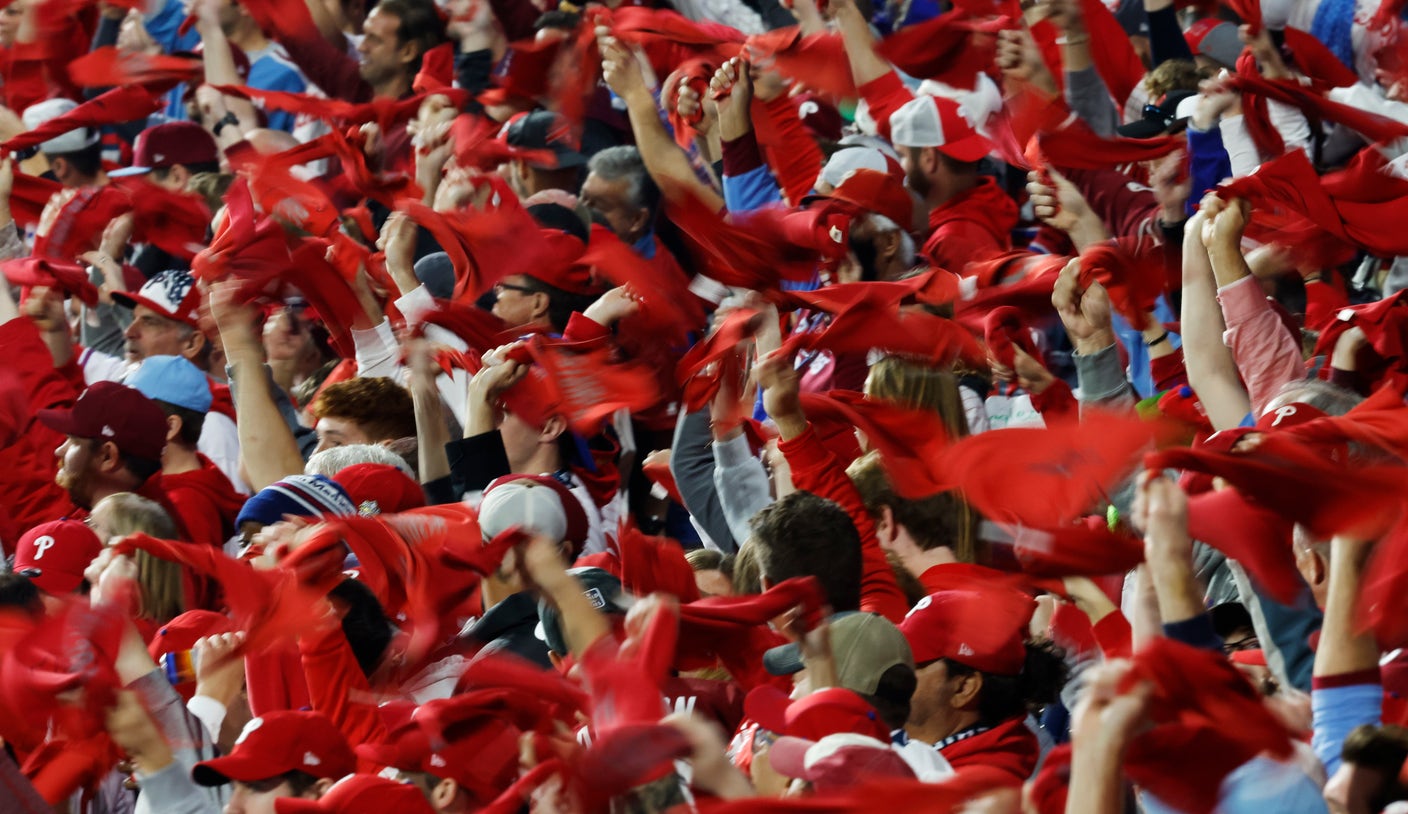 Oh, how times have changed.

On September 25, the Phillies played the Atlanta Braves in their final home game of the regular season on “Fan Appreciation Day”. The fans, understandably, were not in the most appreciative mood.

That Sunday, his beloved Fightin’s would lose a seventh game in 10 tries. Philly’s 1.5-game lead over the Brewers for the new third NL wild-card spot grew more precarious by the day. A daunting 10-game road trip to end the season loomed large. It was shaping up to be another late-season collapse for a franchise well used to the fall slump.

The only thing that kept the October hope alive in South Philly was an identical capitulation in Milwaukee.

The September 25 box office score claims 32,090 paying customers, but that official count includes all tickets sold. Rewinding the highlights of the game reveals that there were no more than 15,000 fans. The upper decks that afternoon were almost completely empty. The left field seats, the seats that would soon become the landing spot for the most iconic home run in the stadium’s history, were 10, maybe 15 percent.

That means about 15,000 paying customers chose to stay home and watch the Eagles. The Phillies were a sunk cost. They had no interest in being appreciated, they had heard it all before.

In his first season with Philadelphia, the veteran outfielder had quickly become the undisputed leader and voice of the clubhouse, and as such, he was tapped to address the crowd before first pitch on D-Day. ‘Fan Appreciation. So Schwarber, a microphone wrapped around his leg, walked onto the grass beyond the first base dugout and turned around, taking in the scene.

What he saw—rows and rows of empty seats, an odd sight for a team clinching a postseason berth—couldn’t have been particularly encouraging. This wasn’t Wrigley Field circa fall 2016.

“We would like to thank each and every one of you for coming all this year and supporting us.” Schwarber said, his low voice booming through the speakers. “It’s been a pretty crazy year so far, hasn’t it?”

Little did he know.

“We’ll continue this for you,” he reassured. “So follow us to the end. Stick with us and we’ll see where this takes us.”

No one in the crowd, no one on the field, not even Schwarber himself, could have imagined the next 40 days of Phillies baseball.

On Thursday night, after a month of unpredictable craziness, the Phillies finally hosted their final home game of the 2022 season. It didn’t go as planned.

More than 45,000 real people, voices hoarse from cheers and jeers, wrists aching from cheers and towel waving, watched Philly drop Game 5 of the World Series in Houston in a heartbreaking moment for the ages.

Justin Verlander was good enough to get his first win in the Fall Classic. The Phillies’ offense squandered chances early and couldn’t muster a big hit late. Hometown boy Chas McCormick made a spectacular catch to rob JT Realmuto of a double in the ninth. The ‘Stros are one win away from a title.

Chas McCormick’s stunning catch helped seal a 3-2 victory for the Astros in Game 5 of the World Series.

Most people went home sad, but very few could have left disappointed.

Spring is here, a month of indelible moments that will become Broad Street murals. And for the players themselves, the once-in-a-lifetime opportunity to play in front of such a fervent and spirited crowd is something they will remember for a long time.

“We’ll still be talking about these things 30 years from now.” Rhys Hoskins shared before the game: “We see the lads from ’08 in the box telling stories. Whatever happens over the next three games, we’ve got memories we can hold on to.”

The mood in the locker room after the game, however, was decidedly less enthusiastic. Hoskins, whose six playoff homers have helped spark this magical run, was notably knocked down after a tough 0-5 showing with four strikeouts. Brandon Marsh, the high-energy fan favorite who hit with runners on the corners and one out in the eighth in perhaps Philly’s best shot to tie the game, had the face of a seltzer left uncovered and s It has been flat.

None of this fazed Schwarber.

“I guarantee you there’s going to be a lot of people in this room going to bed frustrated. That’s human, it’s okay to be frustrated tonight. But tomorrow they’re going to wake up and turn the page. We’re still playing. the World Series.”

Forty days earlier, about six hours after Schwarber greeted that apathetic crowd on Fan Appreciation Day, the Phillies walked into the locker room with a similar taste in their mouths. His parting gift to CBP was an exasperating 8-7, 11 innings-plus loss to the Braves. They left the ballpark that night for a 10-game road trip to end the regular season, not knowing whether their next home game would be in October 2022 or April 2023. Outwardly, they didn’t look like a group destined for glory. But, perhaps irrationally, as baseball players can be, the Phillies had faith.

“No one packed the lockers.” shortstop Bryson Stott recalled. “We knew we could win, wherever we were. And we did.”

After Thursday’s Game 5, the Phillies packed their bags for the upcoming trip to Houston. But bags, this time of year, are better than cardboard boxes. Those lockers, and the belongings in them, were returned intact. Baseball, like life, repeats itself.

And while the Phillies weren’t world-beaters on that crucial road trip, going just 4-6 in their last 10 games, it was enough that Milwaukee couldn’t outrun the fastest team going get out of the proverbial bear.

So when the Phillies returned home on Oct. 14 after 19 days away, they returned to a stadium filled with maniacal, ear-dropping bags. A postseason berth in Houston and a wild-card round in St. Louis had proved enough; and so Game 3 of the NLDS became a glorious homecoming. The rest, as Schwarber told FOX Sports after Game 5, “has been a total blur.”

Bryce Harper yells at the Philadelphia fans after his homer sparked a Game 3 loss.

To fill “The Bank,” the Phillies first had to validate themselves off of him. The fans bought in, the atmosphere changed and the champagne flowed all because of what they got elsewhere. Now, they will have to do it again.

Regardless of what happens at Minute Maid Park this weekend, it won’t cheapen what happened at Citizens Bank Park all postseason: This Phillies team washed a decade’s worth of stink out of the ballpark in a single month.

During the reconstruction years, the ballpark became a symbol of ineptitude and perpetual disillusionment. Fear of fandom. A place to enjoy a few cold ones on a summer night, sure, but competitive baseball? Please.

For many Phillies fans, “The Bank” became a place they felt compelled to enter, rather than a place that offered sporting hope. The bygone symphonies of the Utley/Rollins years were but distant echoes.

But when the Phillies return home next April, the stadium will come to represent something entirely different. A new coat of paint, a new outlook on life, a rejuvenated house and franchise. That’s because for eight extraordinary autumn afternoons and nights a sea of ​​red flooded this courtyard, filling the place with raw noise, unbounded passion and unadulterated joy.

Jake Mintz, the stronger half of @CespedesBBQ is a baseball writer for FOX Sports. He’s an Orioles fan who lives in New York City and therefore leads a lonely existence most Octobers. If he’s not watching baseball, he’s almost certainly riding his bike. Follow him on Twitter @Jake_Mintz.