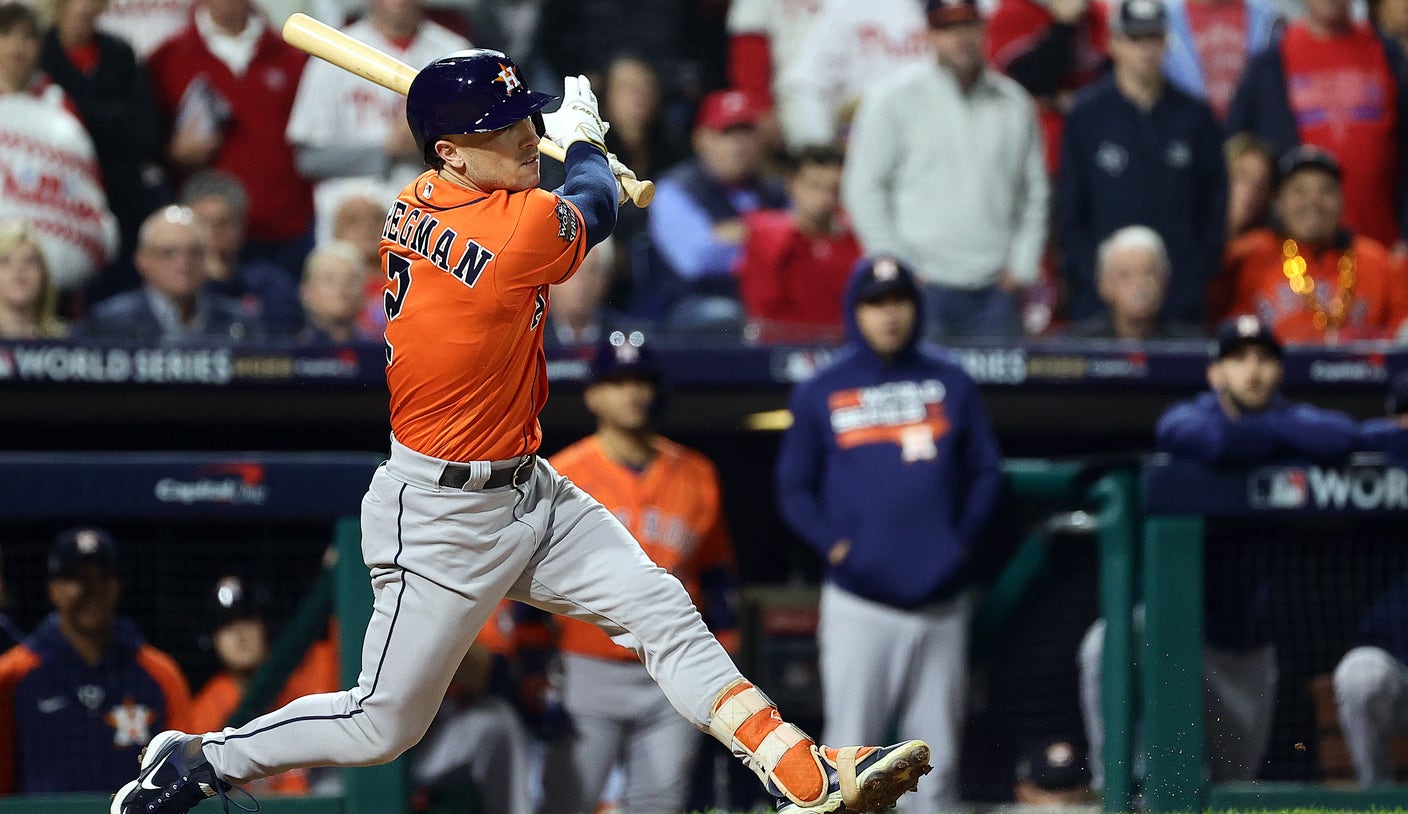 PHILADELPHIA — Kyle Tucker was dancing outside second base after his leadoff double to right field. It was the second inning, and the Astros were putting pressure on Phillies right-hander Aaron Nola.

Yuli Gurriel, in the box, sent a routine ground ball to Phillies third baseman Alec Bohm. Tucker, with Bohm chasing the ball right in front of him, pretended to stay at second. Then, as soon as Bohm threw the ball to first, Tucker took off for third. Gurriel was out at first, and Tucker’s wheels and upside play allowed him to slide safely to third.

“Runs are hard to come by,” Tucker said of his thought process during that play. “We’re up against some really good arms here in the postseason. I was trying to get an extra 90 feet right there and with Yuli getting thrown out at first, it was going to be an out with a guy on third. So we could do anything. to try to get the An extra 90 feet, we’re going to try to do that, and be aggressive with it, but still be smart with it.”

Houston did not score a run that inning; Nola ended up escaping a couple of jams before the floodgates opened. But that aggressiveness from Tucker leading into the third inning hurt that the Astros wanted to tie the World Series again, just as they did after falling behind 1-0.

Alex Bregman talks after the game

Houston’s Alex Bregman talks to the “MLB on FOX” crew about the Astros tying the series and doing just the second no-hitter in World Series history.

Game 5 is Thursday night at 8pm ET on FOX and the FOX Sports app.

The Astros finally snapped their 16-inning scoreless drought in the fifth inning. They collected three straight singles off Nola to load the bases with nobody out. Phillies manager Rob Thomson, continuing his aggressive bullpen management in this series, pulled Nola in favor of one of his best relievers, lefty Jose Alvarado, with dangerous hitter Yordan Alvarez at the plate.

Alvarado’s first pitch of the night drilled Alvarez. And that’s how the Astros put a run on the board for the first time since the fifth inning of their Game 2 victory over the Phillies on Saturday night at Minute Maid Park.

“We had a good mindset going into every at-bat,” Tucker said. “We were very competitive in the frame tonight.”

While the scoreless drought uncharacteristically ended with a bases-loaded hit, what came next was, well, typical Astros.

Trailing in the count, 0-2, Alex Bregman showed off his fast bat and jumped on Alvarado’s 100 mph fastball for a two-run double to right field that extended the Astros’ lead to 3-0.

Then Tucker’s sacrifice fly to center field put another run on the board. Gurriel’s RBI single to left field completed the offensive onslaught, putting the Astros up 5-0 in the fifth. No home runs needed; it was old school ball and contagious.

“It was kind of a baton inning,” Bregman said. “Guys were putting together some good quality at-bats, they were facing pitches that were good to hit, every guy wasn’t trying to do too much, they were just staying within themselves.”

When the 27 outs entered the books, those five runs were more than enough for the ‘Stros to win. Led by Houston’s most impressive starter, 25-year-old right-hander Cristian Javier, and the three relievers who followed him, the Phillies were no-hit by the Astros.

The 45,693 at Citizens Bank Park were silenced in an eerily quiet field that, just 24 hours earlier, was vibrating with electricity. But the Astros lineup that appeared in Tuesday’s Game 3 loss was reckless and chasing pitches without pressuring the Phillies’ pitchers. To eliminate that feeling, Houston’s game plan Wednesday was simple: Strike early and put together better at-bats.

Astros shortstop Jeremy Peña describes what the team’s combined no-hitter was like from his perspective.

Still, the Astros have scored just five of those runs in the last 21 innings pitched. In Thursday’s crucial Game 5, Houston’s batters will look to keep adding to that total against Phillies starter Noah Syndergaard.

“Overall, we did a great job of putting together big at-bats and swinging at good pitches today in general,” Bregman said. “I know we only scored five runs, but I thought our swing decisions were a lot better.”

Deesha Thosar is an MLB writer for FOX Sports. He previously covered the Mets for the New York Daily News. Follow her on Twitter at @Deesha Thosar.