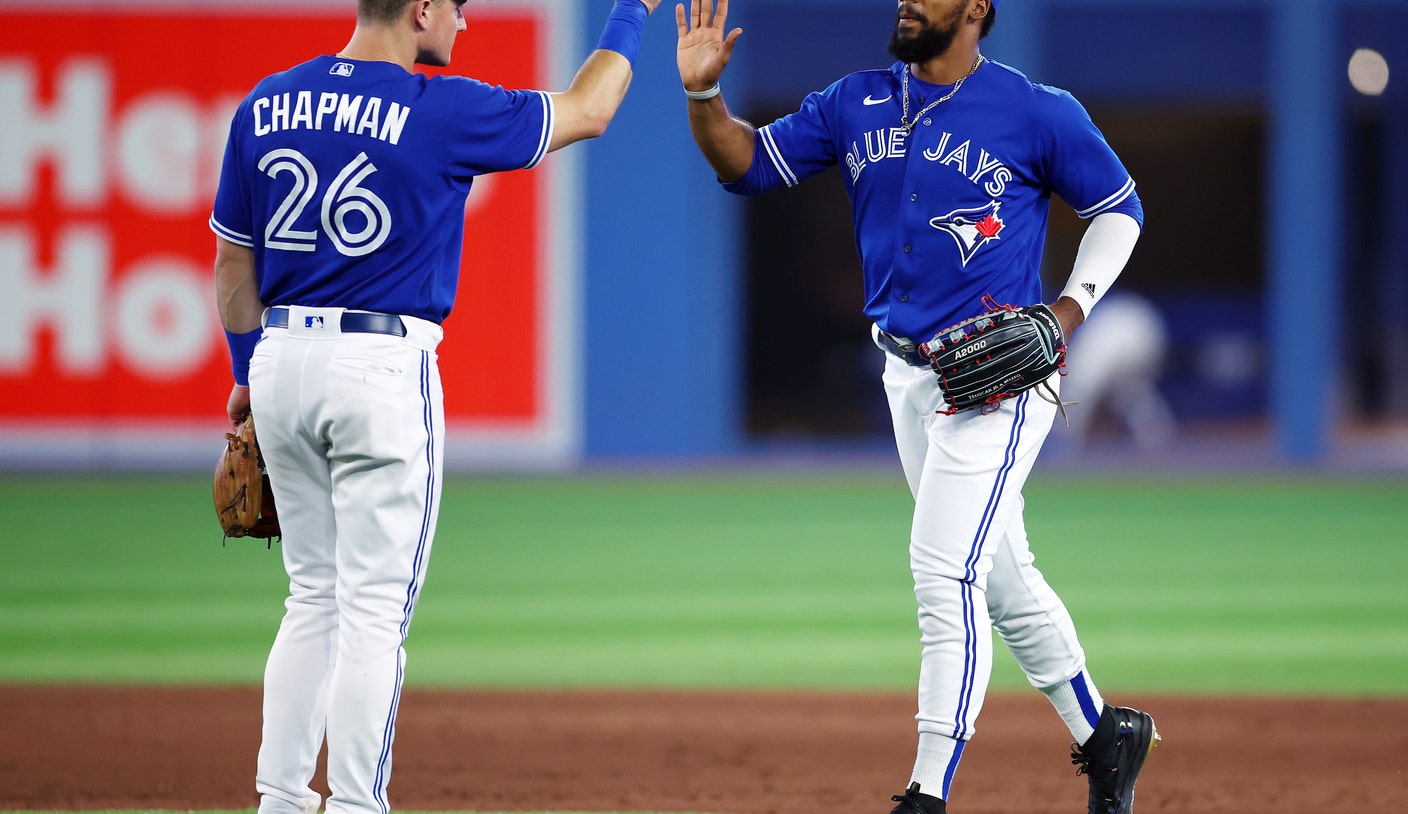 Barring a contract extension that would be pretty shocking at this stage, nothing that happens in the next 10 months will prevent the upcoming offseason from being all about Shohei Ohtani’s free agency.

This offseason may have focused overwhelmingly on Aaron Judge, and rightfully so, but there was a very strong class of stars available beyond him, with five other position players also signing nine-figure deals. As it is now, next winter is not expected to have the same dynamics. While Ohtani is obviously special enough to headline any free agent class, he’s projected to be so far ahead of the rest of his peers that the talk and intrigue surrounding his free agency they might be more focused than any individual free agent. in MLB history.

Think of it this way: If Ohtani were just a position player, he would be the best free agent hitter available next winter. Cy Young caliber pitching pedigree doesn’t matter.

That may not have been true a month ago before Rafael Devers signed an 11-year extension with the Red Sox. He was scheduled to hit the market at the end of this season as a 27-year-old with an extensive track record that teams would have been lining up to pursue. With Devers in Boston long-term, the focus now shifts to another star third baseman on the other side of the country: Manny Machado, who has an opt-out in his Padres contract after next season. Few players could confidently opt out at five years and Machado is owed $160 million for the remainder of his deal, knowing an even bigger payday awaits, but Machado could realistically make that decision.

It’s worth noting that we just saw one of Machado’s closest statistical peers in Nolan Arenado opt out of the five years, $144 million remaining on his deal with the Cardinals entering his age-32 season, so it’s not completely implausible to imagine Machado making a similar decision. entering his age-31 season if he is as comfortable in San Diego as Arenado is in St. Louis. However, Arenado would have opted for a much more crowded free agent class this winter. Perhaps the lack of other star position players hitting the market will prompt Machado to test the market one more time. The way the Padres’ 2023 season goes is more likely to have the biggest impact on Machado’s decision.

But let’s assume Machado stays in San Diego, either through the signing or a restructuring of his current contract. Who is the second-best hitter scheduled to hit free agency next winter behind Ohtani?

I know, you might be thinking: Really? Is he the best guy? Hear me out: We’re talking about one of the best defensive third basemen in the world, who is a lock to give you 25+ dingers and has been one of the most durable outfielders in baseball during his career. In many ways, he’s a third-base version of Dansby Swanson with a much longer track record of hitting for real power and a legitimate lead as an MVP candidate as recently as 2019. Swanson had the advantage of being two years younger than Chapman will be next. winter, but even in a crowded market, he got a seven-year, $177 million deal this offseason. He may never rediscover his 6+-WAR magic from 2018 to 2019, but if he can get back in that direction after back-to-back 4.1 fWAR seasons, he should retain that top spot come next winter. It simply offers the best combination of offensive and defensive advantage available.

Ben Verlander and Alex Curry each list the three teams they believe did best in the 2022-23 MLB free agency market.

This is a talented quartet of players fully capable of posting huge platform years and ascending or surpassing Chapman as the best non-Ohtani hitter on the market.

Happ won his first All-Star and first career Gold Glove in 2022. A power-hitting infielder is a strong profile to bet on, especially given the strides he’s made done as a righty hitter after posting some pretty extreme splits. in favor of his left side early in his career.

You could make an argument for Hernandez’s offensive track record as deserving of the top spot on this list, even ahead of Chapman. But as a corner defensive infielder whose numbers dipped slightly in 2022, he settles into this tier, albeit as a strong candidate to move up to the lead come season’s end. Of course, it’s much harder to imagine him with a monster platform year in the less friendly confines of T-Mobile Park compared to his previous ballpark in Toronto. However, the consistency with which he absolutely crushes the ball is on par with some of the highest profile free agent signings of recent years.

He offers even less defensive value than Hernandez as a below-average first baseman, but Hoskins has been one of the most consistent power and patience hitters in the league since debuting in 2017. He’s basically a 60+ base lock extra -hits per season, which can only be said of so many other players in the league.

The Philadelphia Phillies dugout reacts after Rhys Hoskins hits a home run in the fifth inning of Game 3 of the 2022 World Series. (Photo by Elsa/Getty Images)

Rosario may seem like a stretch to include here, but he’s projected to be one of the youngest free agents and by far the most desirable shortstop available. He never walks and doesn’t hit the ball very hard, but his elite speed and contact ability have allowed him to be a league-average hitter for several years now. Even if he simply repeats the season he just had, he will be in good shape entering free agency. If his offense (or defense) takes another step forward, he could be in a very strong spot.

Each of these players has shown varying degrees of star potential during their careers, while also showing severe red flags to the point where it’s still hard to get too excited about them as free agents. 2023 could go a long way to move either of them up this ranking, but it seems just as likely that they’ll continue to get frustrated and end up with a short-term deal.

Bader’s elite defense in center field probably offers the highest floor of this group. While his production at the plate has never mirrored that of an All-Star, Bader’s ridiculous October streak with the Yankees reminded us that there may still be more in the tank offensively. Winker still got on base at a decent rate, but his power was completely diminished relative to his monster 2021, likely due to a combination of the injuries he was battling and the much smaller home ballpark friendly in Seattle compared to his previous home in Cincinnati. A return to the NL Central and a more hitter-friendly park in Milwaukee could do wonders for him.

The wild ups and downs of Gallo and Bellinger’s careers will register as Extreme on the Roller Coaster Tycoon ride intensity scale, but that won’t stop us from dreaming of a return to stardom with their new teams. The talent is obviously still within each of them to rebound in a huge way and cash in next winter, especially Bellinger, who will only be 28 years old.

Michael Conforto (30) and Jorge Soler (32) could opt out of their current contract after this season and may also fit into this category if they have strong seasons in 2023.

You generally know what you’re going to get from this group of players, so it’s harder to envision a dramatic jump. Still, each is good enough to put up a big year and ultimately benefit from the weak free agent class surrounding them.

An early draft of these rankings had Gurriel Jr. much closer to The Contenders level due to age and star production as recently as 2020, but a drastic drop in slugging in 2022 and limited defensive value moved him into that group. Arizona should be a great place for him to rediscover his power stroke.

Joc is very difficult to evaluate, as he would have been this offseason had he not accepted San Francisco’s qualifying offer. His gaudy 2022 line may suggest he deserves to be closer to the previous Hernandez/Hoskins duo, but his track record of being a full-time offensive force is shorter and a year older. It could also be argued that he offers even less defensive value than those two, which is really saying something.

Wong and Urshela are both consistent defenders who posted quietly strong offensive seasons in 2022, though they are now moving into new ballparks that will make it much more difficult for them to repeat that success at the plate.

The same could be said for Renfroe, Urshela’s new teammate in Anaheim, though his power generally plays anywhere. It’s a much bigger threat to suddenly hit 40+ dingers and win a ton of money.

Josh Bell (31) should also be mentioned here, as he could opt out of his deal with the Guardians and hit the market again if he can put together a fuller campaign in Cleveland instead of a scorching half-season like has become accustomed to repeating itself. the course of his career.

If this set of position players doesn’t come close to taking your attention away from Ohtani, I don’t blame you. It will likely factor into Machado’s decision to hit free agency again. However, it’s important to note that the extremely thin market for free agent hitters can be offset by what could be an especially strong starting pitching class, again, even beyond Ohtani.

This offseason saw a trio of super-aces at the top of the market in Justin Verlander, Jacob deGrom, and Carlos Rodon, each of whom got big deals as expected. While the next level of arms beyond them, like Kodai Senga, Jameson Taillon, Chris Bassitt and Taijuan Walker also did pretty well, I think the depth of talent in next winter’s starting pitching class it is noticeably deeper. We’ll take a look below!