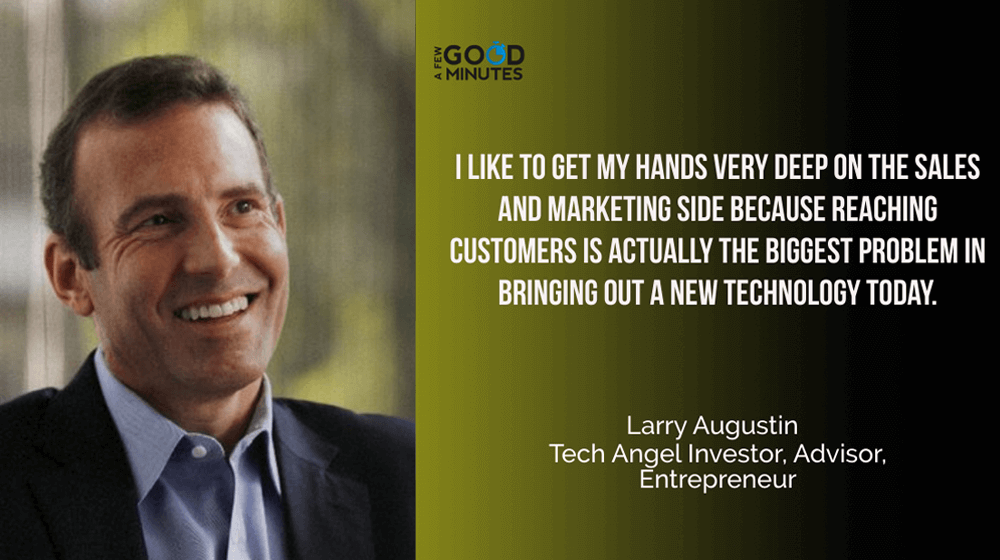 I’ve known angel investor, advisor, and entrepreneur Larry Augustin since his days as CEO of SugarCRM, and I’ve had him on this series a couple of times (2011 and 2016). SugarCRM grew from $10 million in annual revenue and a $15 million loss to $100 million in revenue and $7.5 million in EBITDA. Accel-KKR acquired SugarCRM in August 2018. And after nearly a decade as Sugar’s CEO, Larry spent a couple of years at Amazon Web Services (AWS) as vice president responsible for its web services businesses. applications, including contact center offerings.

Larry is currently focusing on angel investing and advising a few technology startups. And with his varied experiences and background, my CRM Playaz co-host Paul Greenberg and I were excited to catch up with Larry for a long overdue LinkedIn Live conversation. Below is an edited transcript of part of a conversation. Click the embedded SoundCloud player to hear the full conversation.

Thoughts on Amazon before working there

Brent Leary: Larry, I don’t know if you remember the conversation we had over a decade ago. We talked about whether Amazon would, or potentially, buy FedEx or UPS because it seemed like they would have to do something on their own when it comes to shipping. Do you remember that conversation?

Larry Augustine: Oh, absolutely. Are you kidding? We were having this discussion about Amazon’s transformation… where do they go next? And my argument was that they should be vertically integrated. And if you think about Amazon, that’s one of Amazon’s strategies. It’s what Jeff Bezos says, “your margin is my opportunity,” right?

If you think about it, every step of the way where they can take someone else’s gross margin dollars, they do it right. And when it comes to logistics delivery, that’s what Amazon was built for. And take it the next mile, to the house, and first of all, they get all that gross margin, but then they get end-to-end control.

What I didn’t understand at the time is that Amazon preferred to reinvent the business process and capability from scratch to do it in a new way, with new technologies; and doing it better than buying something that exists and maybe already has a lot of infrastructure in place, but was designed and built with technologies from 50 years ago, 40 years ago, decades ago.

So you see they do it themselves in the end. They’ve created all the tools, the fleet, their goals to go all electric, in terms of fleet delivery costs. The idea that delivery is there, you have a picture of exactly where the box is when it’s delivered, but reinvent that and own that end-to-end supply chain.

No, I remember that conversation as I watched them advance that way. My first thought was that they would acquire it, but then again, they are willing to invest for the long term and own it.

Brent Leary: You spent about a decade as the CEO of a small software company, SugarCRM, and then you took some time off and then you came on board and became a level VP with AWS. Can you compare and contrast what it was like to go from being the CEO of a small company to the VP level of a large company? What adjustments did you have to make? And then which one do you prefer?

Larry Augustine: Both are great experiences. I’ve been very fortunate in my career to be able to do both and do all of those things. I give this, I don’t know, this great career advice for people but I give it to people who are; do things you like and do things you learn from. For me, I tend to do different things at different stages of my career because I like to learn new things. I love the challenge of something new and I enjoy learning from it.

Part of the reason I went to AWS was that I wanted to learn about this organization and understand that they are great at things. And if you’re in the tech world today, you’re probably building on AWS infrastructure. It has fueled a great, great deal of the entrepreneurial development of today’s new technologies and new businesses. So I wanted to get into it and I really enjoyed seeing the… And being able to operate on that scale.

That was one of the fun and interesting things about the smaller company you have. It’s this interesting contrast. A smaller company, it can tend to be in control of everything, meaning “hey, we’re going to make a product.” I can decide that we will make a product. Let’s get It Started. I can push it across the organization. I can make everything happen from sales to marketing to engineering to do it and you can bring it all together, but you don’t necessarily have the scope or the scale to do everything you want in one place like AWS on Amazon.

well You’re in a bigger company. You have more infrastructure and constraints around you. There are expectations because you are building an AWS product. There are several things you need to connect. So you’re a little bit more restricted in terms of flexibility to do all those things. Although I will say that Amazon is a great place to push people to be flexible and do things, but you still have to fit in. The structure of the organization but you have immense resources to move forward, right?

We go to 50 of the biggest companies in the world and talk to them about product ideas. How can we be helpful? What can we bring you? We have this new idea where we want to bring this new idea to market. I have instant access to do that and I have the reach and scale to make some of these things happen. So it’s different. Both are fun. Both are interesting.

Personally, I find that one of the biggest challenges in bringing new technology to the world today is sales and marketing, which is interesting, because I’m an engineer by training. I think it’s actually easier to build the technology. I think it’s harder to get it into the hands of customers. I like to get really deep into sales and marketing because getting to customers is actually, I think, the biggest problem in getting a new technology out there today. And so despite the reach of a large company, I find sometimes it’s harder for large companies to do that because they have a lot of installed base. They have a lot of weight behind existing products. it’s fascinating

One of the things I like about the smaller company is that in many ways I think you have more opportunity to put your full weight behind some new ideas. So it’s a really fascinating contrast between the two.

Paul Greenberg: How do you even determine that? How do you choose it, how do you think about it? I honestly haven’t found a pattern in anything.

Larry Augustine: I look for people who are passionate about what they do; all with that and solve an interesting problem where people know they have a problem. And there are common things there. For example, I have this business, I’m working with people who do the virtual agent for IT and HR help desks. And a lot of that relates to my experience with the call center, the customer experience, that space because it’s really about helping employees get information. It’s also AI. What I call a native AI company, which is reimagining an application built from the ground up, around AI. It’s a subject I like.

I’m making another one. Another company I’ve spent time with is open DB, completely different space if you’re familiar with the Bloomberg terminal.

Larry Augustine: There are currently 300,000 Bloomberg Terminals users. Bloomberg terminals are over $20,000 a year. But what has happened in recent years, retail investment has gone a long way. Retail investors are now driving the markets. And there are tens of millions of people doing stock picking, investing as individuals. What is Bloomberg Terminal for them? They don’t have access to it. And what these guys are doing with open VB is democratizing access to financial information, making it available.

Imagine tens of millions of users with access to something that was once very expensive that only a few people had. I love them… Lower the price and go with overseas stuff. It’s a bit, if you remember the computer…

But as the price goes down, the market gets big. I love this concept. In businesses where you take something that only a few people could afford or benefit from, but then you really lower the price and now make it available to a large number of people and grow the market tremendously. I love business like that. Because I think they make life better for everyone because you’ve taken something that used to be the domain of a few and now you’ve allowed a lot of people to have it. I think they make life better for everyone. I think they’re a fun place to be because of that. And I like business like that. So if you see me doing some things that feel a little bit consumer retail, it’s probably something like that.

One of the ones I also told you I’m doing is this company that recently invested that makes residential steering wheel batteries, where did that come from?

Well today, if you want battery backup for your home, you’re buying expensive lithium batteries. Again, it’s not a mass-market technology. This flywheel battery technology may go to the mass market. It’s a 10th of the price and it’s something you can imagine every tiny house in the world has one of these things and they significantly improve their carbon footprint and improve their access to energy and costs because you could put- there is one of those things. fun places to be.

This is part of a series of one-on-one interviews with thought leaders. The transcript has been edited for publication. If it’s an audio or video interview, click the embedded player above or subscribe via iTunes or Stitcher.