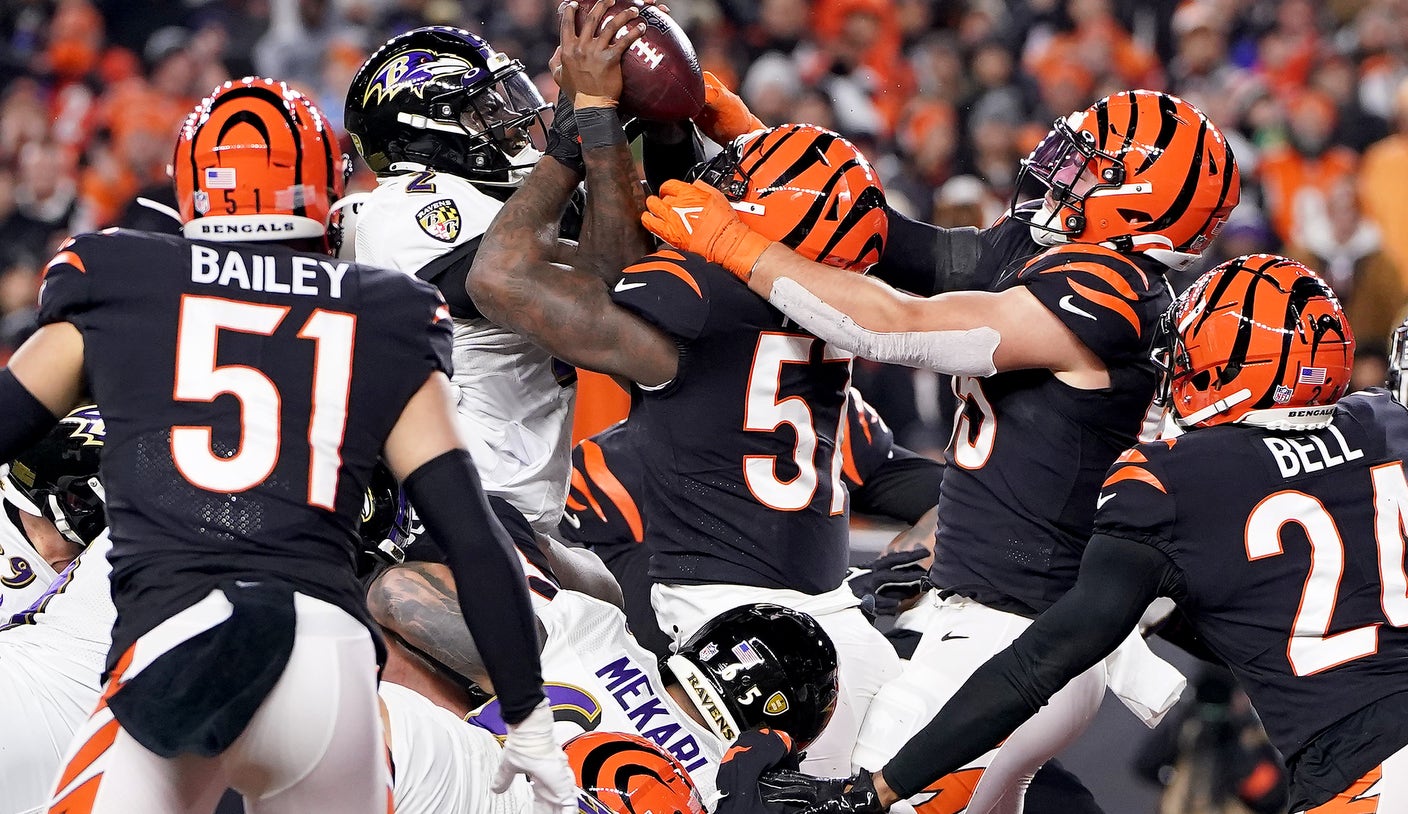 Just when it looked like backup QB Tyler Huntley would give the Ravens an improbable lead over the Bengals in the fourth quarter, things went the other way.

Huntley drove the ball toward the goal line on third-and-goal from the 1-yard line, but Bengals linebacker Logan Wilson dropped the ball and defensive end Sam Hubbard picked off the fumble in the air Hubbard then ran 98 yards for a touchdown, the key play in the Bengals’ 24-17 victory to eliminate the Ravens on Sunday night.

The defending AFC champion Bengals now travel to face the Bills next weekend in a rematch of the Week 17 game that was suspended in the first quarter after Buffalo safety Damar Hamlin collapsed in the field. Hamlin required CPR on the field after going into cardiac arrest, but has since recovered and been released from the hospital.

Until that mistake, Baltimore looked like it could pull off the upset despite the absence of quarterback Lamar Jackson, who missed a sixth straight game with a knee injury. Huntley had thrown two touchdowns, matching his season total in four starts, and was in position to take the lead with 12 minutes left in the game.

Cincinnati, the AFC’s third seed, overcame continued issues on the offensive line, losing a third starter to injury when left tackle Jonah Williams left with a knee injury. The Bengals were already without right guard Alex Cappa and right tackle La’el Collins, making it difficult to protect Burrow and giving him time to find receivers down the field.

Baltimore’s defense had made another stop in the fourth quarter to force a Bengals punt with seven minutes left, and Huntley threw a 29-yard pass to tight end Mark Andrews, but the ball got no further than the midfield With one more shot with 3:14 to play, the Ravens drove into Cincinnati territory, with Huntley converting a fourth-and-1 to the Bengals’ 33 inside the two-minute mark.

The Ravens got to the Cincinnati 17 looking for a game-tying touchdown, but a holding penalty backed them up with 22 seconds left. A final pass on fourth-and-20 from the 27 was incomplete in the end zone to seal the victory for the Bengals.

The two teams had traded touchdowns in the third quarter, with Burrow scoring on a 1-yard keeper and hitting wide receiver Tee Higgins with a two-point conversion for a 17-10 lead. Baltimore answered with a 41-yard touchdown pass from Huntley to wide receiver Demarcus Robinson to tie the game at 17-17.

The Ravens had led 10-9 at the half, their defense holding Cincinnati’s offense to just 127 yards to keep the game close. The Bengals had built a 9-0 lead, turning a Huntley interception into a Burrow touchdown to Ja’Marr Chase on the opening play of the second quarter.

From there, Baltimore took over, with Huntley leading the Ravens on a 17-play, 75-yard drive, capped by a third-and-goal touchdown where Huntley threw to running back JK Dobbins, who stretched and stretch the ball across the goal line for the score.

Ravens rookie safety Kyle Hamilton forced a fumble from Bengals tight end Hayden Hurst on the next drive, and Baltimore had a first-and-goal at the 3-yard line, but couldn’t convert the opportunity Justin Tucker’s 22-yard field goal gave the Ravens a 10-9 halftime lead.

Baltimore played a sixth straight game without starting quarterback Lamar Jackson, who has been sidelined with a knee injury. The Ravens had gone 2-3 without him to end the season, and Jackson reportedly did not travel with the team for Sunday’s game, raising questions about where things stand on a potential contract extension .

Jackson, a former NFL MVP, played out last season with a fifth-year option, making $23 million, and the Ravens are unlikely to simply let him become a free agent in March. The team could use the franchise tag to pay him $32 million in 2023, knowing that a long-term extension would have to exceed $40 million a year, with Jackson insisting that he be guaranteed big part, if not all, of the deal.