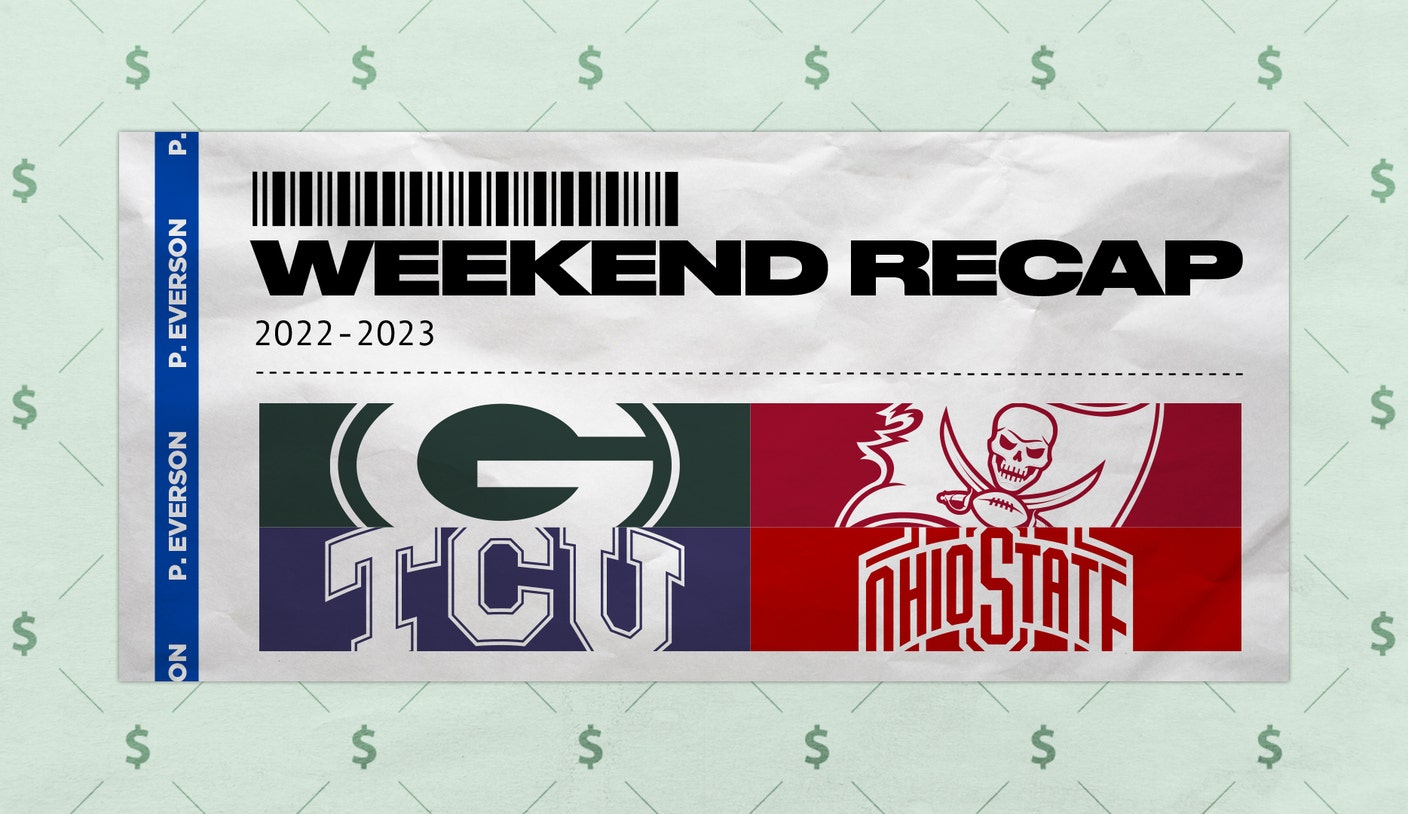 Of course, NFL Week 17 betting offered plenty of interesting storylines and results for punters and bookies alike. But if you bet on the College Football Playoff semifinals, on either team in any game, well, you were in for a very entertaining ride, win or lose.

The results of the TCU-Michigan and Ohio State-Georgia games (TCU pulled off the upset, Georgia bounced back to reach the CFP Championship Game) gave people on both sides of the counter something to be happy about.

Let’s dive into the weekend recap for more.

TCU built a couple of big leads against Michigan and let the Wolverines come back in both periods. But the Horned Frogs, now 13-1 straight up (SU) and 10-3-1 against the spread (ATS), held on for a convincing 51-45 victory as 8-point underdogs.

Defending national champion Georgia (14-0 SU, 7-7 ATS) found itself behind by double digits several times. But in the end the Bulldogs prevailed, narrowly, 42-41 as 5-point favorites.

“They were great games,” WynnBet trader Andy Morrissey said. “We beat TCU big after the Horned Frogs won the game outright. It was good, but our worst case scenario happened in the Georgia game, with Georgia winning but not covering. We were big on Ohio State +4.5, so we lost the day.”

Morrissey did not disclose the size of that bet. But one DraftKings customer revealed a massive play: $825,000 on Ohio State +5.5. It must have been a lot of sweat, but the gambler pocketed a profit of $750,000.

How’s that for sweating?

At BetMGM, vice president of trading Jason Scott said TCU’s upset in the first semifinal made the second one much less of a concern behind the counter.

“The TCU win guaranteed a winning day for the book, so we [could] Enjoy watching Georgia-Ohio State,” Scott said. “The Wolverines were our only losers in the [championship] book of futures, so we’re happy to see them at the back.”

Next up: The CFP Championship Game on Jan. 9, with Georgia as a 13.5-point favorite. More on that over the next week.

The first day of 2023 was generally a good one for BetMGM customers. Scott noted making several significant six-figure bets, including Packers -3 vs. Vikings (win) and Buccaneers -3 vs. Panthers (win).

This bet hit the finish line, as did many other Bucs entries at BetMGM. Also, two of the biggest decisions of the day were in later games: the aforementioned Vikes-Packers game and the 49ers-Raiders tilt.

Aaron Rodgers and the Packers were outshot 41-17. Rookie QB Brock Purdy and the Niners had a tougher game, but pulled out a 37-34 overtime win in Las Vegas. Even though San Fran didn’t cover the 9.5-point spread, the Niners were on almost everyone’s money line, so a win, no matter the margin, was enough for bettors.

“The Packers and 49ers were bad, spread and money,” Scott said, noting that the New York Giants’ 38-10 loss to the Indianapolis Colts was also a notable loser for BetMGM. “Bettors had a great start to the year. Tough Sunday for the book.”

That being said, it’s no wonder that different sports bets require different results. So it was that Sunday went pretty well at WynnBet.

“It was a pretty solid day today,” Morrissey said. “The opening slate was pretty much a wash. Our biggest win in the [early games] it was the Jags, and our biggest loser was the Bucs covering the spread.”

Jacksonville, which will actually make the playoffs if it gets past visiting Tennessee in Week 18, pounded host Houston 31-3 in Week 17. It was an easy sweep for the Jags, who closed as the 3.5 points.

The Niners’ failure to cover against the Raiders was a loser for WynnBet, but the book was still set for the day at the time. And it got better with Sunday Night Football. Just before kick-off, Morrissey noted:

“The biggest game of the day is going to be this Steelers-Ravens game. We made a big bet on the Ravens, so now we’re going to need the Steelers.”

Pittsburgh rookie QB Kenny Pickett engineered two long drives in the fourth quarter, the first ending in a field goal, the second a touchdown. That turned a 13-6 deficit into a 16-13 win for the Steelers, who were 1.5-point underdogs on the road.

Ohio State’s aforementioned +5.5 bet against Georgia was the biggest play of the weekend. But there was a lot more big money betting this weekend. Caesars pointed to some in the NFL:

Of course, the CFP semifinals drew a few players. The following bets came to Caesars:

And there was a pretty tough pill to swallow for a BetMGM customer who put down $100,000 on Ohio State’s +220 vs. Georgia moneyline. The Buckeyes were owned for just 109 seconds the entire game: 55 seconds late in the second quarter and the final 54 seconds of the game.

The drive fell short on a missed Ohio State field goal in the dying seconds. Fortunately, almost all of us will not experience such a heartbreaking loss for this kind of cash. Keep it reasonable, people. Have a great January 2nd full of bowl games and the huge Bills-Bengals nightcap.