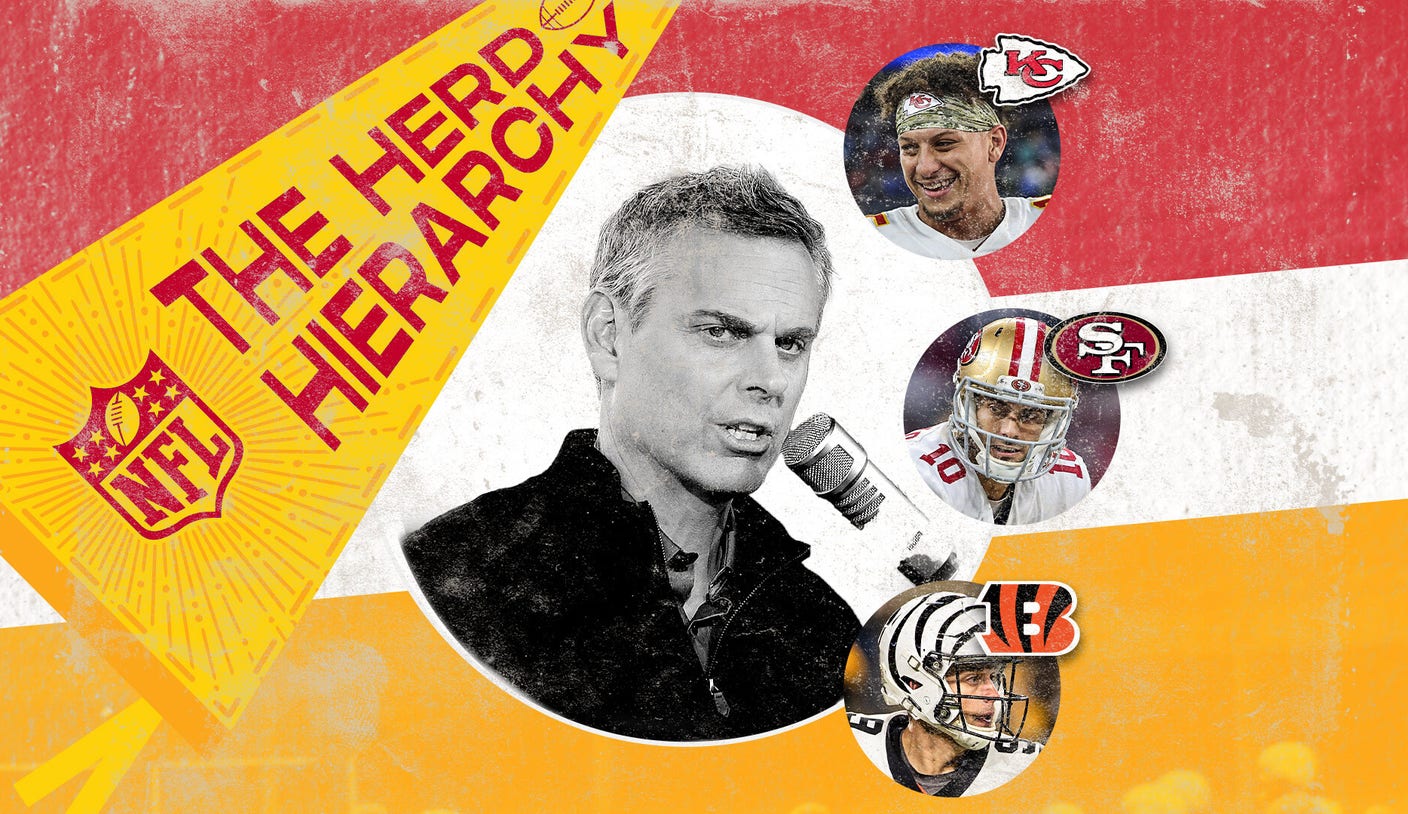 Are the Philadelphia Eagles back on track? Have the Buffalo Bills bounced back? What is the fallout from the Dallas Cowboys shutting down the Minnesota Vikings?

Colin Cowherd, host of “The Herd,” unveiled his “Herd Hierarchy” heading into Week 12 on Tuesday. Here’s his latest list, with information from Bet FOX.

Colin’s thoughts: “I think they’ve found a running game — 161 yards rushing against the Seahawks. Now, they’re not getting big plays — 48 big plays all year, second-worst in the league. So you’re not looking at the Here the Chiefs or the Bills. But there is a way to play in the NFC and win games. Aaron Rodgers [is] he won’t make the playoffs. It will be Brady. They are on a winning streak. They found a running game. They are a little healthier. They’re 11-2 after the bye week since Brady joined the team, so I think they’re improving and they’ve found themselves.”

Colin’s thoughts: “I’ve been high on the Vikings, but I’ve also been betting against them for three straight weeks. Twenty-ninth total defense. Only losses have been to Dallas and Philadelphia, and those teams are a combined 16-4. so they’re losing to the right teams. But I think everybody saw it coming. They’re winning a lot of close games. There are limitations at quarterback.”

Colin’s thoughts: “It’s a good win. It was predictable. Since Dak came back, he’s given you over 100 passer ratings. There’s a lot to like. Now they have a two-layer monster at running back. Very productive and his end closed is healthy They have a legitimate #1 [wide receiver] in CeeDee Lamb and a great pass rusher in Micah Parsons. I still think Dak and the head coach in big positions can be liabilities.”

Colin’s thoughts: “I think the Titans might be the best coached team in the league not called the Chiefs. Seventh win in their last eight games. The fact that they took the Chiefs to overtime without a first down in the second half it’s just remarkable. They’ve had 160 players miss games due to injury. Second most in the league. So they’re not even healthy. They’re 8-2 against the spread. What does that tell you? They’re totally underrated as team. They’re tough. They’re physical. They’re the kind of team that could go to Arrowhead and you look up and say, ‘Wait a minute, why is Mahomes watching the second half?’ I wouldn’t want to play them. They always play with the house money. They never get respect. They’re 7-3.”

Colin’s thoughts: “They’ve held opponents to less than 20 points in five of their last six games. They’ve got a little bit of an interior D-line problem. And I think when you play them the second time, you see them as the season goes on, there’s some fixes for this offense. And the real problem is that they don’t have enough talent to give the ball away and win. The Chiefs are… Philadelphia isn’t. They’ve had six giveaways in the last two games. They’ve only had three in their first eight games, so they were playing incredibly clean football.”

Colin’s thoughts: “They’re 14-1 in the last 15 games that Tua has finished, so they’re productive. They’ve got a smart coach. He doesn’t make mistakes. Eighteen touchdowns, three picks, he doesn’t make mistakes. Now their defense, it’s pretty average. This is a flashy, fun, explosive team, but I trust the Bills defense to make big plays. I trust Cincinnati’s vastly underrated defense in the AFC playoffs to make plays, or the front sevens of Baltimore or Kansas City. I don’t trust this defence.”

Colin’s thoughts: “Here’s the good news: They’ve found a running game the last few weeks. Here’s the bad news: Now their defense is leaky. They’re a team that doesn’t have a lot of nuance. They have to win by knockout. They don’t punch or they move well, but I think they recognize their issues and they’ve found a running game over the last few weeks. Now you’re seeing some leaks in that defense. They’re dangerous, they’re explosive, they look [what] Super Bowl participants look. They just need to clean up a few things.”

Colin’s thoughts: “I think the most underrated team in the league is Cincinnati. So they lose their star receiver, the top five receiver in the league. They lose their star running back — the top five or six running backs in the league. And they” He’s gone over 400 total yards in three of his last four games. This team is deep, a reservoir of talent. [Joe] Burrow is amazing. And his defense, none of his headlines can be named. I don’t love his corners, but he’s a real defense that shut down Pittsburgh and has shut down multiple teams in the second half. Joe Mixon will be back, he is battling a concussion. Ja’Marr Chase is back. When you can lose your two main stars and get almost 40 points, that’s something. And Burrow remains, like Mahomes, a great quarterback who is still on the road. I wouldn’t want to play this team in the playoffs. They’re never out of a game.”

Colin’s thoughts: “They’re finally healthy, Pro-Bowlers on every unit. Now, 63 percent of Garoppolo’s passing yards come after the catch. They don’t throw the ball deep. They don’t throw it to the sidelines. It’s death by 1,000 cuts , so there’s a way to win. But they’re 4-0 against their division, everybody wins by more than 15 points. They’ve separated themselves, in my opinion, like the Chiefs in their division.”

Colin’s thoughts: “Not only are they the best team that can overcome mistakes, play with the lead, play on the road, play from behind, but they’re a very smart team. They understand the issues. What does a team do on third down? ? What does a team do in the red zone? Andy Reid packs a lot into this team offensively. Mahomes is quick enough and smart enough. New player, new scheme, new plays, on the road, from behind, leader – they are a true champion. If you beat them, you have to knock them out because if it goes to later rounds and you don’t finish them off, they’ll finish you with only 13 seconds on the clock.”