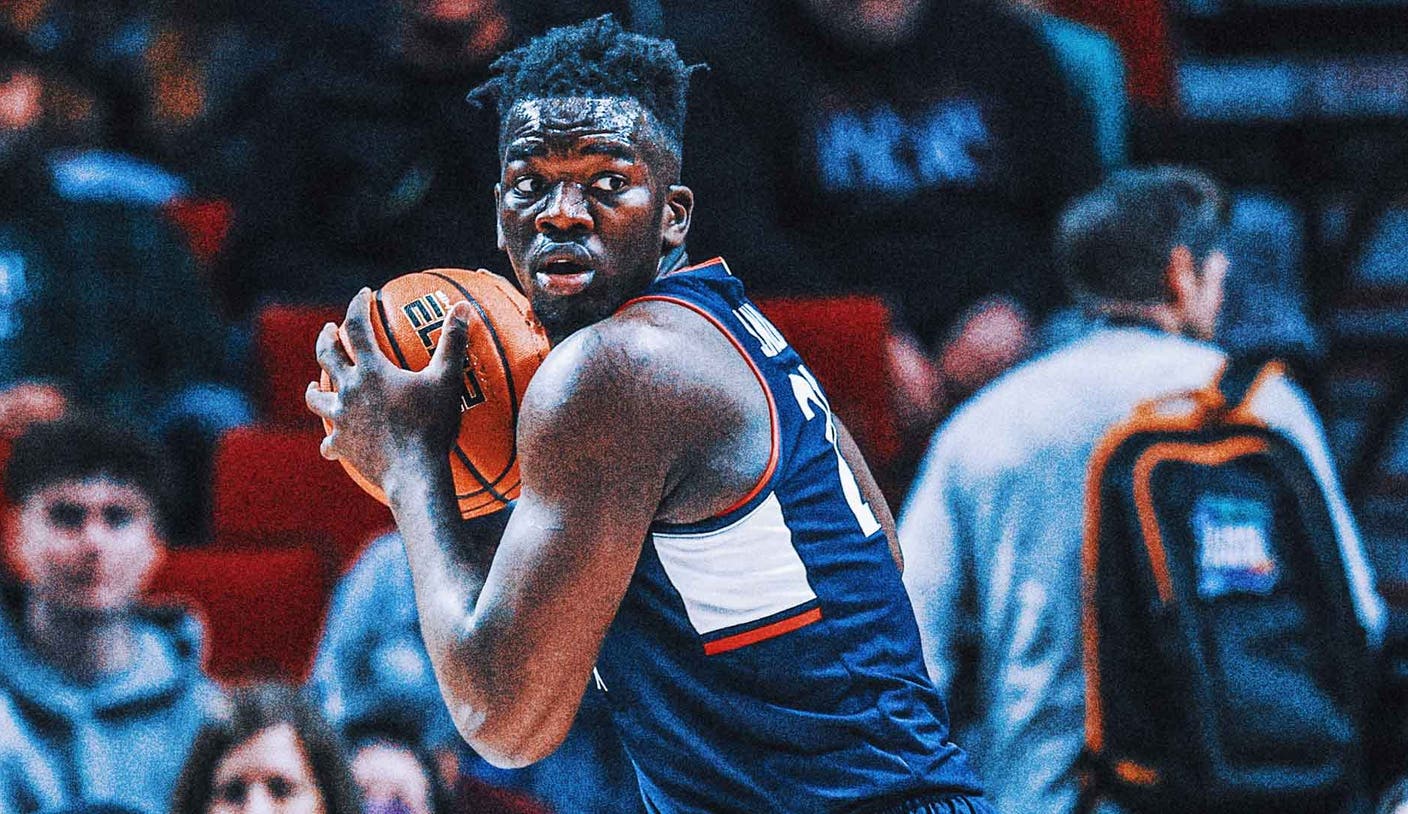 We are in this really fun part of the season. Teams have found out more about themselves five weeks into the campaign, non-conference games still highlight the slate, and conference games are about to fully accelerate across the country.

With that, here’s a new Top 15 poll and some other college basketball takeaways.

The Huskies are one of seven undefeated teams remaining in the country, and are the only undefeated team to win all of their games by double digits. Connecticut has no holes and an embarrassment of riches, with the big man duo of Adama Sanogo and Donovan Clingan in the frontcourt. Andre Jackson’s athleticism and versatility are off the charts, and his contributions go beyond the stat sheet. With sophomore Jordan Hawkins leading a much-improved perimeter shooting group, Dan Hurley has a group that is playing the best basketball in the country right now. UConn visits Butler on Saturday at 7pm ET on FS1.

Is UConn the best team in college basketball?

The Boilermakers survived a tough environment Saturday in Lincoln, Neb., beating an improved Nebraska team 65-62. In the last three games, freshman point guard Fletcher Loyer has 52 points, 13 assists and just one turnover. There is no question that Zach Edey would be the national player of the year at this point as well.

The Wildcats dictated Saturday night’s matchup with Indiana in Las Vegas, dominating the Hoosiers 89-75. Tommy Lloyd has arguably the best frontcourt duo in the country in Azuolas Tubelis and Oumar Ballo, and on Saturday, Pelle Larsson showed just how much he can raise the ceiling for this team with 16 points.

The Crimson Tide pulled off one of the best wins you’ll see all season, knocking off Houston on the road Saturday 71-65. What made it even more impressive? Alabama trailed by 15 with over 17 minutes remaining. Freshman Noah Clowney was sensational, scoring 16 points and grabbing 11 rebounds.

The Cavaliers topped James Madison 55-50 last Tuesday as Kihei Clark led Tony Bennett’s team with 18 points and seven assists in the win. The Hoos have four players averaging between 10 and 11.6 points per game. Their schedule kicks up a notch Saturday with a home game against Houston.

No, we’re not jumping off the Cougars bandwagon because of their first loss. The problem with this team is that Marcus Sasser isn’t in a rhythm offensively and Kelvin Sampson’s team is a combined 12-for-44 from beyond the arc over the past three games. As good as the Cougars are defensively, they need to make more shots. Sometimes it’s that simple.

Noah Clowney’s late loss ends up being the deciding bucket in Alabama’s win over Houston.

Defense travels, and the Volunteers are a good example. They shut down Maryland on Sunday in Brooklyn, earning a convincing 56-53 win over the Terrapins. Rick Barnes’ side are as good in defense as any in the country, and Olivier Nkamhoua’s physicality cannot be overstated.

The defending national champions delivered a reality check to Missouri on Saturday, knocking off the Tigers in the Border Wars 95-67. Jalen Wilson is performing like a first-team All-American and had 24 points and 10 rebounds in the win. The Jayhawks host Indiana on Saturday in what promises to be a big one at Allen Fieldhouse.

The way the Blue Devils dominated Iowa at Madison Square Garden last week was impressive, and it looks like Jon Scheyer has a team with one of the highest ceilings in the country because of the freshman class. The Blue Devils have the length with Kyle Filipowski and Dereck Lively II. They have an alpha in Jeremy Roach. If Dariq Whitehead continues to get to the wing position, watch out. He has added 23 points and five assists in the last two games.

The only time the Longhorns didn’t play at the Moody Center, they couldn’t get a shutout and fell to Illinois. The Texas backcourt of Marcus Carr and Tyrese Hunter makes a lot of shots and can sometimes play themselves into a hole. In the loss to Illinois, the duo combined to go 7-for-25 from the field. With Chris Beard’s arrest Monday morning and a third-degree assault charge against him, this is a big issue for the Longhorns.

While losing Trevon Brazile to a season-ending ACL injury hurts the Razorbacks, Eric Musselman still has one of the best teams in the country. Ricky Council IV has gone from being the AAC Sixth Man of the Year at Wichita State to one of the Hogs’ most important players. In Saturday’s win against Oklahoma, the junior played all 40 minutes and scored 26 points. While freshman superstars Nick Smith, Jordan Walsh and company steal a lot of headlines, Council has provided a strong presence through the gate.

Keyonte George is one of the best freshmen in college basketball. In last week’s win over Tarleton State, the 6-foot-4 five-star guard had 22 points, seven rebounds and six assists for the Bears. Scott Drew’s team ranks fifth in the nation in KenPom’s adjusted offensive efficiency. What’s interesting is that on defense, Baylor is 47th. Will the bears come close to their DNA on this end of the earth?

The Bulldogs have won three of their last four, with the only loss coming in a one-point loss to the team above them, Baylor. Julian Strawther is serving as a dynamic wing option for Mark Few’s offense who can also play opposite Drew Timme. The 6-foot-7 junior has scored in double figures in four straight games and had 18 points and 12 rebounds in Friday’s win over Washington.

The Bruins have won five games in a row and 6-foot-5 junior guard Jaylen Clark has made quite a leap for Mick Cronin’s team. With 24 points in Saturday’s win against Denver, Clark went from 6.7 points and 3.8 rebounds per game to 15.1 points and 6.1 boards per game. We find out more about UCLA this week. The Bruins visit Maryland on Wednesday (9 p.m. ET on FS1), before taking on Kentucky on Saturday at Madison Square Garden.

It was hard to pick a team in this 15th slot, with the Hoosiers, Illinois and Maryland all in the mix. IU is the pick, though, because the Hoosiers shouldn’t be criticized for losing to Arizona in Las Vegas. Can the Hoosiers back up our claim that they are still the second best in the Big Ten? They visit Kansas in a big game on Saturday. It’s a tall order, but a matchup they can win because the Jayhawks’ frontcourt has some issues.

Race Thompson drains a 3 against Arizona

Indiana forward Race Thompson hit a crucial 3 against Arizona on Saturday, though it wouldn’t be enough to put the Wildcats away.

1. How about Chris Jans and 9-0 Mississippi State? The Bulldogs are on the outside of our Top 15 poll and have been one of the biggest surprises in college basketball. Senior forward Tolu Smith is the name to watch, averaging 17 points and nine rebounds per game for the Bulldogs. They are an elite defensive team.

2. Don’t sleep on Shaka Smart and Marquette. The Golden Eagles picked up another quality non-conference win on Sunday, going on the road to beat Notre Dame 79-64 in South Bend. Sophomore guard Kam Jones is one of the most underrated backcourt players in the country. On Sunday, he had 25 points and no turnovers in 35 minutes.

3. Memphis is a dangerous team, and Penny Hardaway’s group has a lead guard to steer the ship in Kendric Davis. In Saturday’s top-15 win over Auburn, the SMU transfer had 27 points, nine rebounds and six assists. Can the Tigers make a statement at Alabama on Tuesday night? Opportunity knocks.

4. Penn State hasn’t made the NCAA Tournament since 2011, but the Nittany Lions have plenty of experience, a balanced offense and a level of connection that could lead Micah Shrewsberry to break the drought this season. Saturday’s 15-point win at Illinois was very impressive as Andrew Funk and Myles Dread combined for 11 points. Jalen Pickett is the engine of the team. This season he is averaging 16.2 points, 7.7 rebounds and 7.5 assists per game.

5. Saturday at the university basketball will be wild. There are FINE ranked matches vs. ranked scheduled in this sport (AP Top 25).