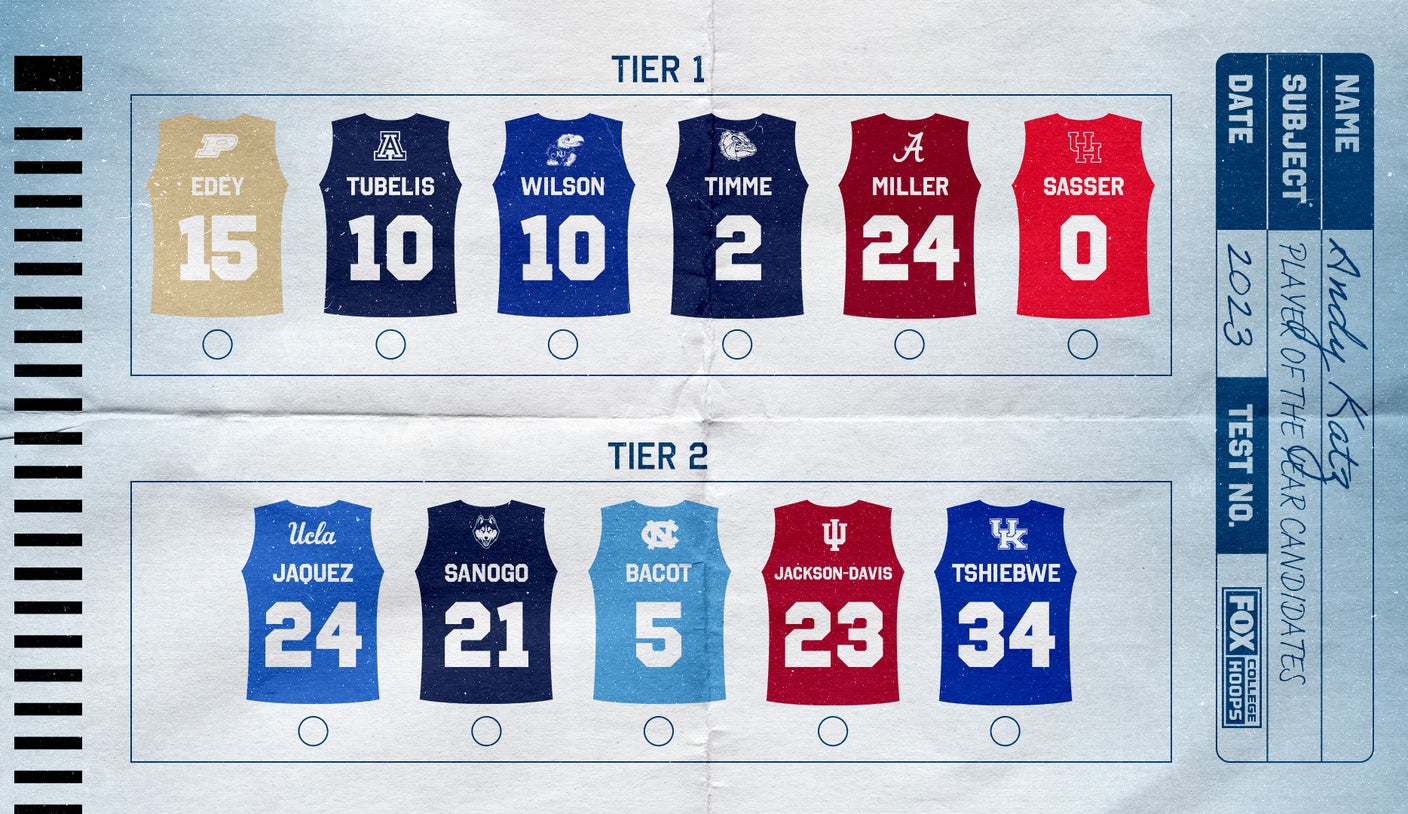 Purdue sophomore Zach Edey was the overwhelming favorite to be the Naismith Men’s College Player of the Year a few weeks ago, but the award doesn’t come before the holidays.

As the season reaches its halfway point, the race to become the best college basketball player in the country, let alone an All-American, is on.

That being said, it’s time to review my National Player of the Year rankings.

Tier 1: Player of the Year Leader

Edey is averaging 21.7 points, 13.4 rebounds and 2.2 blocks per game. He still looks like the most dominant big man in the country, but Purdue hasn’t looked as dominant lately. The Boilermakers dropped their first game of the season earlier this week, a 65-64 loss to Rutgers, before escaping Ohio State with a tight 71-69 win on Thursday .

Tubelis is legitimately fighting for the top spot on this list. The 6-foot-11 junior from Lithuania is averaging 20.1 points and 8.7 rebounds per game. He’s been sensational in big games this season, including a 21-point, nine-rebound outing in a 69-61 win over in-state rival Arizona State.

Wilson has risen to the challenge of being the best player in the Big 12 and leading the Jayhawks back to the top of the league. The 6-foot-8 junior forward leads the conference in scoring with 20.6 points per game and ranks second in rebounding, averaging 8.4 boards per contest.

Timme has re-emerged as a player of the year candidate with his recent productivity. The senior big man is averaging 22.7 points and 8.3 boards per game. He is also in the top 10 nationally in field goal percentage, shooting 65.9 percent.

Miller is the top freshman in the country, playing for an Alabama team that could be a potential No. 1 seed in this year’s NCAA Tournament. The former five-star recruit is averaging 19.1 points and 8.6 boards per game while leading the Crimson Tide to an impressive 12-2 start this season.

Sasser leads the Cougars to a possible No. 1 seed in the NCAA Tournament and a chance to host the Final Four in Houston. He is averaging a team-best 15.9 points per contest while leading Houston to a near-perfect 15-1 record.

Jáquez came back to lead the Bruins to a Final Four, and it looks like he might just do it. The Bruins’ all-around guard is averaging 17.2 points and 6.3 rebounds per game for a UCLA team that has won 11 straight and is off to a 5-0 start in Pac-12 play.

Sanogo and the Huskies have found themselves in a bit of a bind this past week, dropping back-to-back games after an impressive 14-0 start. However, the 6-foot-9 big man from Mali continues to enjoy an excellent season worthy of a second tier. He is averaging 17.4 points and 6.8 rebounds per game, and is a candidate for Big East Player of the Year.

Bacot has bounced back from some early disappointments to once again be an anchor for the Tar Heels. The preseason All-American leads the ACC in both scoring (18.6 points per game) and rebounding (11.1). He is coming off an impressive 21-point, nine-rebound effort in an 88-79 win over Wake Forest.

Injuries have slowed Jackson-Davis this season, and losing to Arizona and Kansas didn’t help. However, he is still putting up 16.4 points and pulling down 8.2 boards per game this season. He also had a memorable triple-double against Nebraska.

The Wildcats are struggling and have been inconsistent this season. Despite dealing with an early season injury, Tshiebwe is still averaging a double-double with 16.8 points and 13.8 rebounds per game. So the Naismith Award winner could still repeat.

Level 3: It’s hard to keep them that low

The Blazers guard is averaging 25.2 points and 4.7 assists per game for a team that should win Conference USA. He leads the nation in scoring and is coming off a 31-point outing in a 90-67 win over UTSA.

Miles is an underrated player playing for an underrated TCU team. He leads the Horned Frogs in scoring (19.9 points per game), assists (3.3) and steals (1.5), and has been instrumental in helping the team to a 13-1 start.

Johnson is the best story this season, after collapsing on the court in 2020 while playing at Florida. The senior forward is averaging 18.4 points per game and the Wildcats have become perhaps Kansas’ top challenger in the Big 12.

Wong is averaging 16.3 points per game for a Hurricanes team that will once again be in the heart of the ACC race. The junior guard has scored in double figures in seven of Miami’s last eight games, including a 36-point effort in a win over Cornell on Dec. 7.

Sensabaugh could have a unique season like Malaki Branham with the Buckeyes. He is averaging 15.9 points per game for the No. 24 Ohio State Buckeyes.

Level 4: Don’t sleep on them

Injuries slowed him down early, but when the 7-foot-1 big man is on the floor, he’s nearly unstoppable in the post. Kalkbrenner is averaging 15.3 points and seven rebounds per game for the Bluejays, who have now won three straight after a six-game losing streak.

The Lobos were the last undefeated team in the country because of the 1-2 punch of House and Jamal Mashburn Jr. House is averaging 17 points, five assists and 2.9 steals per game for the Lobos.

Brown is averaging 15.3 points per game for the surprising Tigers, who are off to a 12-2 start this season. The senior guard scored 30 and 31 points in wins against Kentucky and Illinois, respectively.

The Blue Devils have struggled in the ACC of late, dropping two of their last three. However, Filipowski has been solid, leading the team in scoring (13.8 points per game), rebounding (8.6) and steals (1.2). He has been the most consistent freshman in Duke’s class.