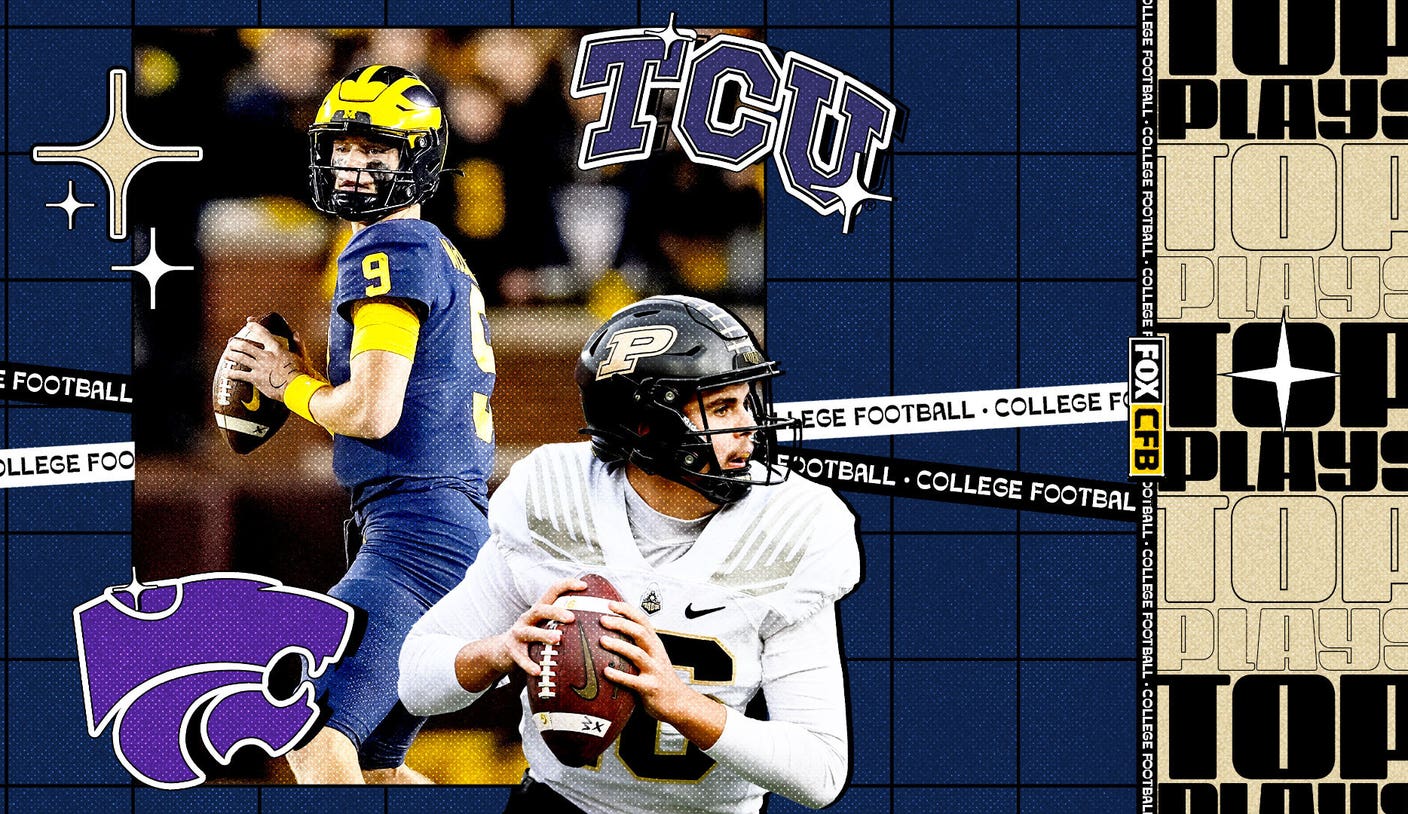 Week 14 of college football The season features a handful of highly anticipated matchups to end the year. To open the day, No. 3 TCU lost its first game of the season, falling 31-28 to No. 10 Kansas State in overtime in the Big 12 Championship.

Capping things off on FOX is the Big Ten title game in Indianapolis, with Purdue taking on No. 2 Michigan, and neighbors No. 9 Clemson and No. 23 North Carolina in the ACC Championship Game .

UCF managed just one first down on the opening possession of the game. Tulane’s first possession was much different.

And the kick is good

After forcing another UCF punt, Tulane added to its lead. The Green Wave went up 10-0 after a 54-yard connection between Pratt and wide receiver Deuce Watts to set up a field goal.

Tulane failed to convert a fourth-and-1 from their own 32-yard line, and UCF made them pay.

Although it took eight plays, Xavier Townsend got the Knights on the board with a 5-yard touchdown run. The score cut Tulane’s lead to 10-7.

On the fourth play of Tulane’s next drive, Pratt found wide receiver Lawrence Keys, who proceeded to run through the UCF defense for a 43-yard touchdown. The Green Wave took a 17-7 lead, which was the score at halftime.

Tulane came out of the half in style. After getting a first down on second-and-5, running back Tyjae Spears found a way to evade a series of UCF defenders and make his way into the end zone for a 60-yard touchdown. The score gave Tulane a 24-7 lead.

Tulane pushed its lead back to three points on the opening play of the next possession, when Pratt hit Watts up the middle of the field and then took off for a 73-yard touchdown.

UCF responded immediately. On the sixth play of the drive, running back RJ Harvey hit Hudson for a 49-yard touchdown, his second score of the game.

Up to a score

UCF forced and recovered another Tulane fumble and took advantage. On the fourth play of the possession, UCF running back Isaiah Bowser ran in a 10-yard touchdown, cutting the deficit to three.

Tulane does it again

On the fourth play of Tulane’s next drive, Pratt threw for his fourth touchdown of the game. That was a 60-yard strike to Wyatt, who caught his second score of the game.

LSU didn’t score on the game’s first possession, but its defense forced a Georgia three-and-out. On LSU’s next possession, their offense set up a 31-yard field goal attempt. Then chaos ensued.

Georgia blocked the field goal attempt, with Chris Smith returning it to the house for the first score of the game.

I got it back!

On the third play of the ensuing drive, quarterback Jayden Daniels hit wide receiver Kayshon Boutte for a 53-yard touchdown, tying the score at seven.

The Bulldogs scored their first offensive touchdown in the closing moments of the first quarter.

Quarterback Stetson Bennett hit tight end Brock Bowers with passes of 15 and 32 yards in the early stages of the drive and connected with the sophomore to cap the drive with a 3-yard touchdown, which gave Georgia a 14-7 lead. .

Daniels threw a pass that bounced off a player’s helmet and was eventually intercepted by Georgia linebacker Smael Mondon. One play later, Bennett hit wide receiver Ladd McConkey for a 22-yard touchdown.

The Bulldogs are retiring. Georgia got its fourth touchdown of the game when Bennett hit tight end Darnell Washington for a 14-yard score.

It was all Bulldogs in the first half. Just before halftime, Georgia found the end zone for the fifth time when Bennett hit wide receiver Dillon Bell for a 3-yard score. An LSU field goal before halftime made it 35-10 at halftime.

LSU recovered a Georgia fumble and took full advantage of the takeout.

On the third play of the ensuing series, quarterback Garrett Nussmeier, who entered the game after Daniels was injured, hit wide receiver Malik Nabers for a 34-yard touchdown.

After the Tigers forced a three-and-out, Nussmeier connected with Nabers on a 59-yard pass. But with a chance to make it a 10-point game, LSU turned it over on downs when running back Josh Williams was stuffed on fourth-and-1 from the Georgia 5-yard line.

Georgia does it again

The Bulldogs scored their sixth touchdown on a drive that started from their own 5-yard line. The highlight of the drive was Kendall Milton taking off with a 51-yard run.

LSU’s offense has come alive. A drive sparked by an out-of-bounds kickoff and Williams’ 47-yard run ended in the end zone as running back Noah Cain drove in for a 1-yard score. LSU failed to convert the two-point conversion and trailed 42-23.

I can’t stop them

Georgia had its way with LSU’s defense in this one.

After running for a touchdown on their previous possession, McIntosh ran for his second score on Georgia’s next drive. This was an 8-yard touchdown. Georgia then converted a two-point conversion to take a 50-23 lead.

Is TCU in regardless of what happens today?

No. 4 USC fell in the Pac-12 title game Friday night, losing 47-24 to Utah. After the USC loss, many think TCU is a lock to make the College Football Playoff with their 12-0 record.

Quentin Johnston’s ankle looked good early when he caught a 53-yard pass from Max Duggan on TCU’s second play of the game.

The Horned Frogs completed their first 13-play drive with a touchdown pass from Duggan to Taye Barber.

The bold call leads to a great result

In the final seconds of the first quarter, Kansas State opted to go for it on fourth down. The decision paid off when Will Howard found Ben Sinnott on the floor for play action. Not only did Sinnott get the first down, he ran into the end zone for the 6-yard score to make it 7-7.

The Kansas State quarterback was able to get into the end zone with ease as the option worked to throw off TCU’s defense and the Wildcats took a 14-7 lead into the second quarter.

Kansas State running back Deuce Vaughn couldn’t get the yardage needed on fourth down as he ran into a Horned Frogs wall, giving TCU the ball and good field position at the end of the first half

Johnston looked like he was going to get the Horned Frogs into scoring territory with a big 31-yard catch on his first play after the fourth down. However, the star wide receiver made an uncharacteristic mistake and fumbled the ball, giving it back to Kansas State.

TCU saved from a safety

A strange play on the Horned Frogs’ first half of the second half occurred when Duggan faked a pass when a Wildcats defender hit the ball with his hand. The ball rolled into the end zone and was recovered by a TCU offensive lineman, giving Kansas State two points and a 16-10 lead.

However, review determined that Duggan’s fake met the criteria of a throwing motion for a pass, so the pass was ruled incomplete and negated two points for Kansas State.

The Wildcats still got their points anyway after the safety was overturned. Howard found RJ Garcia II on a 25-yard seam pass to give the Wildcats a 21-10 lead early in the second half.

TCU has a break

After another stalled offensive drive, TCU was poised to give the ball back to Kansas State by the 11. However, the Wildcats fumbled the punt and appeared to give some momentum back to the Horned Frogs.

I can’t deal with Kendre

TCU took advantage of the punt and Kendre Miller put the Horned Frogs in the end zone on a 6-yard run to cut Kansas State’s lead to 21-17.

Big blow but a big win

Duggan took a big hit from a Kansas State defender just after the snap, but it had no effect on the play as Johnston was wide open down the field to complete the 51-yard reception to put in leaves TCU while looking to take the lead.

TCU was in position to cut the lead to at least one, but Duggan’s pass on a fade route into the end zone fell short and was intercepted by Julius Brents.

Kansas State’s star running back hit the planes for a 44-yard touchdown to help his team take a 28-17 lead and put TCU back in another two-score hole.

Along the way, Vaughn may have scraped the ankles of a TCU defender.

Taking one for the team

Barber had a big catch for TCU on fourth down. However, it came at a price as he was on the wrong end of a heavy hit, laying on the ground for a few moments before leaving the match.

TCU ended up kicking a field goal later in the drive to cut Kansas State’s lead to 28-20.

Duggan putting the team on his back

The TCU quarterback ran for 95 yards on a single drive, including a 19-yard run on fourth-and-2, a 40-yard run to get into the red zone and an 8-yard touchdown run to cut the lead to two.

Duggan was gassed after the touchdown run, but recovered enough to complete a pass to Jared Wiley on the two-point conversion to tie the game with 1:51 left.

TCU ends the overtime kickoff empty-handed after Miller’s fourth-and-goal at the 1-yard line resulted in one, allowing Kansas State to potentially win the Big 12 title by any score.

The Wildcats play it safe after holding off the Horned Frogs in overtime, with Ty Zentner kicking a 31-yard field goal for the win.