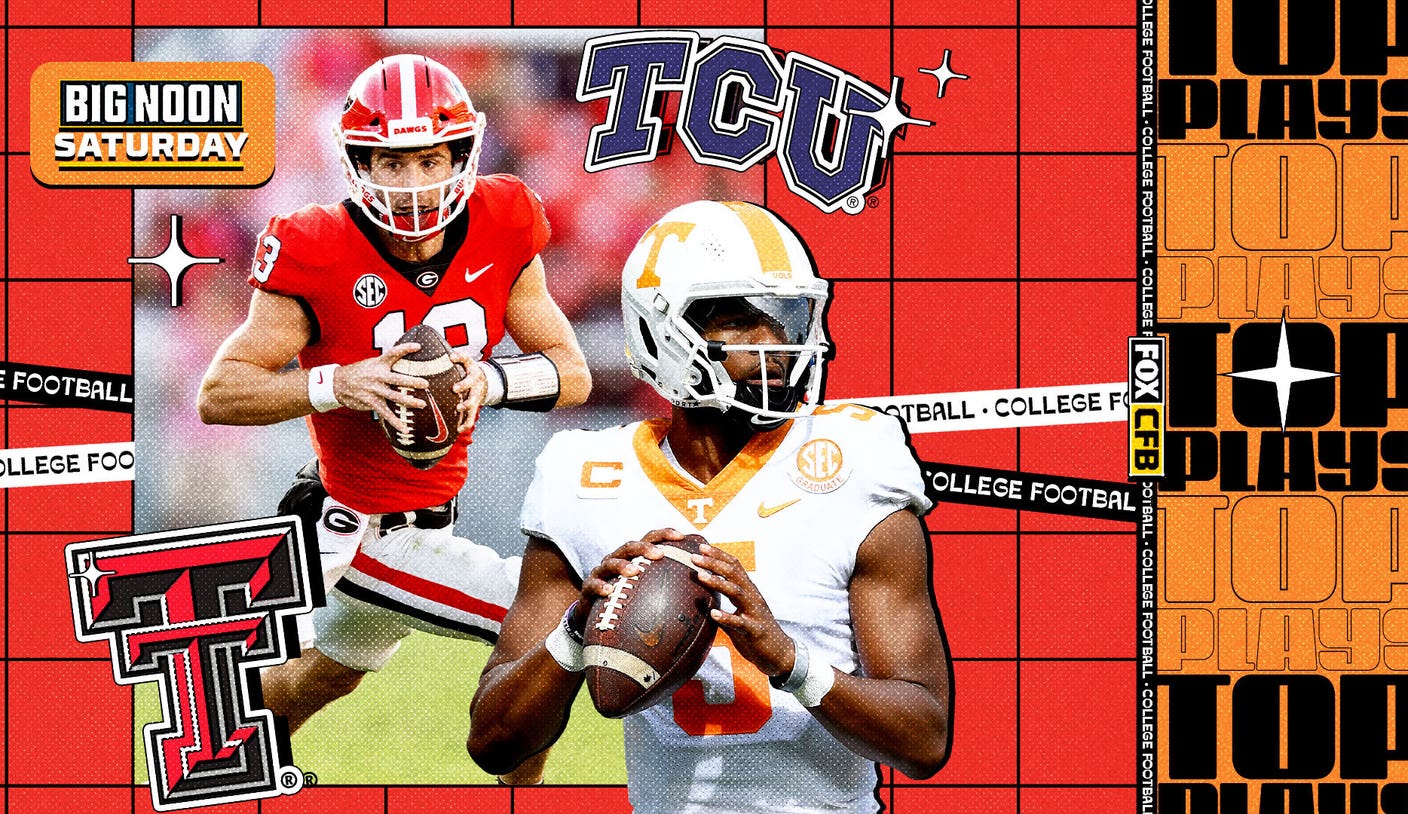 Week 10 of college football The season features some incredible matchups and we’ve got you covered from start to finish!

Starting Saturday, No. 7 TCU and No. 2 Ohio State came away with big wins in the first window. There is currently a battle between two undefeated teams underway in Athens as #1 Georgia takes on #2. Tennessee in a very important SEC tilt, while at #18 Oklahoma State takes on Kansas on the road on FS1.

Here are the best plays on the board from Saturday’s Week 10.

Tennessee was first on the board in this after Georgia fumbled on its opening drivebut the Bulldogs bounced back in a big way – charging down field and coming up with two touchdowns in the first quarter.

First, QB Stetson Bennett punched himself in to give the home team a 7-3 lead.

Stetson Bennett runs to the pylon for the TD

Then, a perfect 75 yard punt and a questionable one security without a call set the stage for another Bulldogs score as Ladd McConkey came up with a 37-yard pass from Bennett to give Georgia a double-digit lead.

A perfect punt, a questionable safety and an immediate Ladd McConkey score somehow give Georgia a 14-3 lead over Tennessee in the first half.

Georgia got its third touchdown of the first half, thanks to an all-out effort by Marcus Rosemy-Jacksaint.

After trading field goals, the Bulldogs held an 18-point lead heading into the second half.

Stetson Bennett drives right down the field for another TD to give the Georgia Bulldogs a 21-3 lead over the Tennessee Volunteers.

No. 18 Oklahoma State at Kansas

Kansas grabbed an early lead thanks to great footwork by Devin Neal on this 31-yard touchdown run.

Devin Neal took off for a 31-yard TD, giving Kansas the lead against Oklahoma State.

Oklahoma State answered in the second quarter with a score of its own when QB Garret Rangel connected with Stephon Johnson in the corner of the end zone. So it was a three-point game.

There was no stopping Kansas after that, as QB Jason Bean broke free for a monster 73-yard touchdown run.

Bean followed with a rushing touchdown pass to Lawrence Arnold to make it 24-7 before halftime.

Going all the way back

After forcing a punt on Texas Tech’s kickoff, TCU got the quick score when Derius Davis returned a punt 82 yards for a touchdown to put the Horned Frogs up 7-0 less than two minutes into the match

No one stops him

Jerand Bradley caught a pass up the middle and had plenty of daylight in front of him en route to a 47-yard touchdown to tie the game.

JJ Sparkman came down with the hard-fought 33-yard touchdown catch to give Texas Tech a 17-13 lead in the third quarter.

Texas Tech QB Tyler Sough completes a 33-yard pass to JJ Sparkman for a touchdown. The Red Raiders hold a 17-13 lead against the Horned Frogs.

TCU’s potent offense scored its first touchdown of the day in the opening minutes of the fourth quarter when Kendre Miller scored on a short run to give the Horned Frogs a 20-17 lead.

Kendre Miller finds a hole in the Texas Tech defense to go ahead, 20-17.

TCU scored a third straight touchdown in the fourth quarter, this time on a 16-yard pass from Duggan to an open Emari Demercado. TCU, which trailed early in the frame, had doubled up on Texas Tech.

The Red Raiders scored late in the final stretch, but it wasn’t enough to spark a comeback, and things ended there, 34-24.

Max Duggan found Emari Demercado in the end zone for a 16-yard score, allowing TCU to extend its lead, 34-17, against Texas Tech.

Northwestern, a heavy underdog in this matchup, stunned the third-ranked Buckeyes by taking a 7-0 lead late in the first quarter, courtesy of Evan Hull scoring on a touchdown run.

The nation’s second-highest scoring offense mustered just seven points in the first half against Northwestern, scoring its only touchdown just before halftime on a run by Emeka Egbuka.

Miyan Williams rushed into the end zone from 27 yards out to give Ohio State a 14-7 lead in the third quarter, its first of the day. To celebrate, Williams made snow angels in the wet Evanston weather.

It wasn’t pretty, but not every win has to be pretty. Williams had another score in the second half as the Buckeyes cruised to a 21-7 road victory.

THE BEST OF THE REST:

Illinois QB Tommy DeVito connected with Isaiah Williams, who put on a clinic with an early 60-yard touchdown against Michigan State.