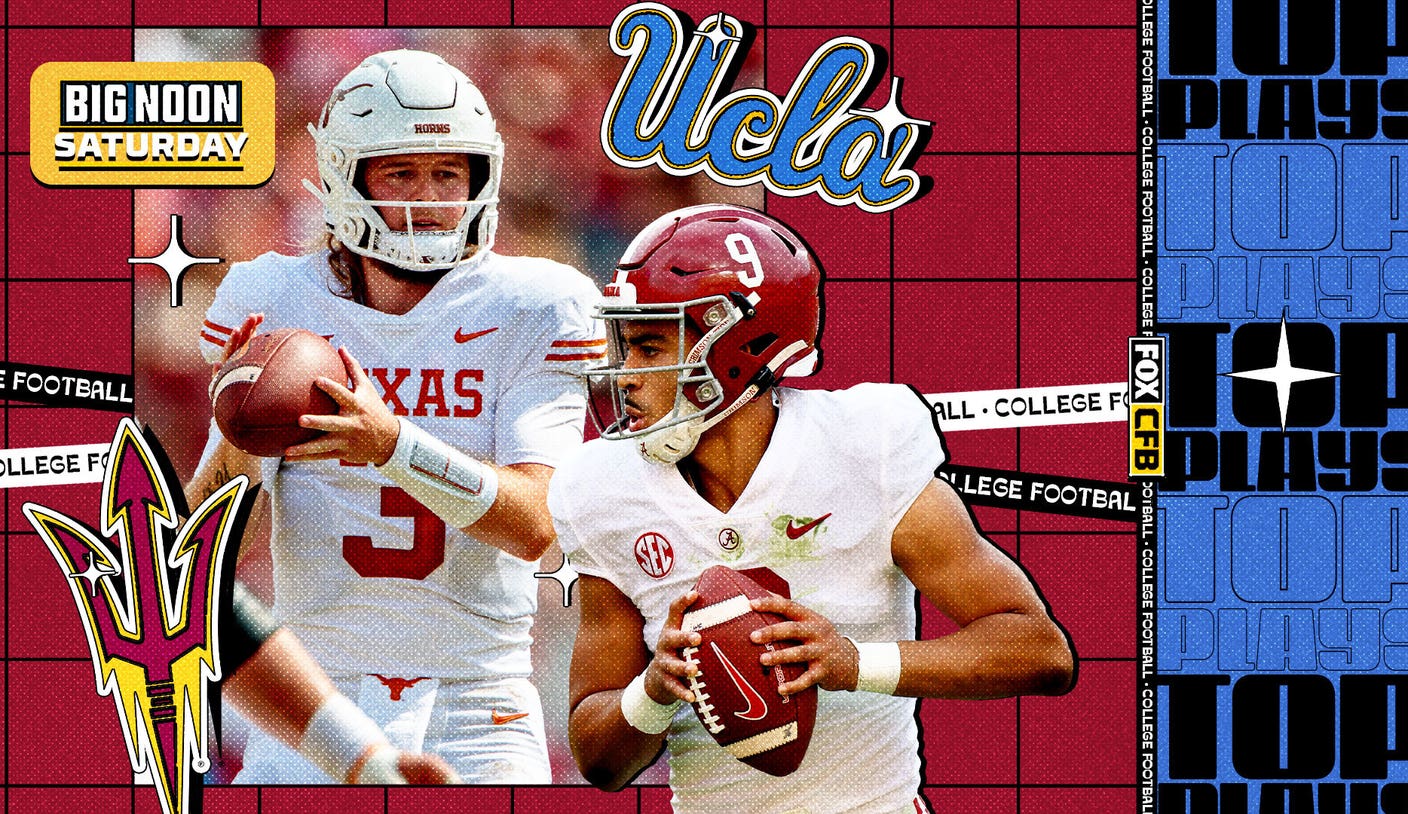 Week 10 of the college football season has featured several incredible matchups thus far, and we’ve got you covered from start to finish as No. 12 UCLA takes on Arizona State to close out Saturday’s action.

Earlier, No. 10 LSU downed No. 6 Alabama in overtime, as Brian Kelly’s squad opted for a gusty two-point conservation instead of the game-tying extra point.

Earlier in the day, No. 7 TCU and No. 2 Ohio State came away with big wins. Later, all eyes were on No. 3 Georgia, as the Bulldogs dominated No. 1 Tennessee to stay undefeated and move to 9-0. Elsewhere, Kansas pulled off a major upset at home against No. 18 Oklahoma State to become bowl eligible for the first time since 2008, while No. 24 Texas picked up a road win over No. 13 Kansas State.

Here are the top plays from Saturday’s Week 10 slate.

No. 12 UCLA at Arizona State

UCLA QB Dorian Thompson-Robinson got the Bruins on the board early with this stylish score.

After Arizona State added a field goal, the Sun Devils got the ball back and marched down the field for a go-ahead touchdown, compliments of tight end Messiah Swinson.

UCLA back on top!

UCLA closed out the first quarter on a high note as Thompson-Robinson connected with Keegan Jones for a 3-yard touchdown, giving the Bruins a 14-10 lead.

Jones put his head down and bulldozed his way into the end zone for his second score of this day.

A strike from DTR

Following ASU’s touchdown, UCLA answered right back on the very next offensive play. Kazmeir Allen showed off his speed, breaking off a huge 75-yard run for a touchdown.

Kazmeir Allen couldn’t be stopped, as he goes 75 yards to the house for the UCLA Bruins.

Things remained scoreless between these two until the second quarter, when LSU QB Jayden Daniels connected with John Emery Jr. for a dazzling 30-yard touchdown to give the Tigers a 7-0 edge.

Alabama added two field goals in the first half to keep things close and make it a one-point game at the break. The Tide took the lead in the third quarter, 9-7, with their third field goal of the game …

… but the lead was short-lived, as LSU took over in the third quarter.

Alabama got its first touchdown of the game early in the fourth quarter to make it a one-point game, 15-14.

Bryce Young connected with wideout Ja’Corey Brooks for a 41-yard touchdown to take the lead, 21-17, late in the final frame …

… but LSU had other plans, as Daniels linked up with tight end Mason Taylor for a touchdown with less than two minutes to spare. Then, Alabama punched in a field goal in the final seconds to send things to overtime.

Alabama got in the end zone first in overtime, but LSU answered with a score on its very first play.

Then, the home team opted to take the riskier route and went for the two-point conversion for the win, and the rest is history.

Just like that, LSU took charge of the SEC West, while Alabama was left with two or more losses in the regular season for the first time since 2019.

Starting off with a bang

Bijan Robinson broke off for a wild 36-yard touchdown run to get the Longhorns on the board early.

Kansas State QB Adrian Martinez linked up with Deuce Vaughn for a 28-yard score to tie the game.

Quinn Ewers and Xavier Worthy were the stars of the second quarter, connecting for two scores in the corner of the end zone that lifted the Longhorns to a 21-point lead heading into the half.

Quinn Ewers connects with Xavier Worthy to boost Texas’ lead in the first half.

Kansas State came up with two second-half touchdowns to pull within seven points early in the fourth quarter, but it wasn’t enough to pull off a comeback, and things ended with the Longhorns picking up a road win.

Adrian Martinez finds Kade Warner down the middle for TD

Adrian Martinez finds wide receiver Kade Warner down the middle for the 25-yard touchdown against the Longhorns to shrink their lead to 31-24.

Tennessee was first on the board in this one after Georgia fumbled on its opening drive, but the Bulldogs bounced back in a big way — charging downfield and coming up with two first-quarter touchdowns.

First, QB Stetson Bennett punched one in himself to give the home team a 7-3 edge.

Stetson Bennett rushes to the pylon for the TD

Then, a picture-perfect 75-yard punt and a questionable safety no-call set the stage for another Bulldogs score, as Ladd McConkey reeled in a 37-yard pass from Bennett to give Georgia a double-digit lead.

A perfect punt, a questionable safety no-call and an immediate score from Ladd McConkey somehow gives Georgia a 14-3 lead over Tennessee in the first frame.

Georgia came up with its third touchdown of the first half, thanks to Marcus Rosemy-Jacksaint’s all-out effort.

The Bulldogs would go on to win, 27-13, putting an end to Tennessee’s perfect season.

Stetson Bennett drives right down the field for another TD to give the Georgia Bulldogs a commanding 21-3 lead over the Tennessee Volunteers.

Kansas jumped out to an early lead thanks to Devin Neal’s fancy footwork on this 31-yard touchdown run.

Devin Neal took off for a 31-yard TD, giving Kansas the lead vs. Oklahoma State.

Oklahoma State answered in the second quarter with a score of its own, as QB Garret Rangel connected with Stephon Johnson in the corner of the end zone. Just like that, it was a three-point game.

When it rains, it pours

There was no stopping Kansas after that, as QB Jason Bean popped off for a monster 73-yard touchdown run.

Bean followed that up with a quick touchdown pass to Lawrence Arnold to make it 24-7 ahead of the break.

Jason Bean found Lawrence Arnold for an 8-yard touchdown ahead of halftime.

All gas, no brakes

Kansas started the second half the same way it ended the first — by scoring. Bean found fullback Jared Casey for a short touchdown to put the Jayhawks up 31-7.

Jason Bean found Jared Casey in the end zone for a 2-yard touchdown. The Kansas Jayhawks lead 31-7 over the Oklahoma State Cowboys.

Too little, too late

Oklahoma State added a fourth-quarter touchdown, courtesy of Jaden Nixon, but it wasn’t enough to spark a comeback, as the Cowboys fell on the road.

Returning all the way

After forcing a quick stop on Texas Tech’s opening drive, TCU got the quick score when Derius Davis returned a punt 82 yards for a touchdown to put the Horned Frogs up 7-0 less than two minutes into the game.

No one stopping him

Jerand Bradley caught a pass over the middle and had plenty of daylight in front of him en route to scoring a 47-yard touchdown to tie the game.

J.J. Sparkman came down with the tough, contested 33-yard touchdown catch to give Texas Tech a 17-13 lead in the third quarter.

Texas Tech QB Tyler Shough completes a 33-yard pass to J.J. Sparkman for a touchdown. The Red Raiders hold onto a 17-13 lead against the Horned Frogs.

TCU’s high-powered offense scored its first touchdown of the day in the opening minutes of the fourth quarter when Kendre Miller scored on the short run to give the Horned Frogs a 20-17 lead.

Kendre Miller finds a hole in Texas Tech’s defense to take the lead, 20-17.

TCU scored a third consecutive touchdown in the fourth quarter, this time on a 16-yard pass from Duggan to an open Emari Demercado. TCU, which trailed at the beginning of the frame, had doubled up Texas Tech.

The Red Raiders went on to score late in the final frame, but it wasn’t enough to spark a comeback, and things ended there, 34-24.

Max Duggan found Emari Demercado in the end zone for a 16-yard score, allowing TCU to extend their lead, 34-17, against Texas Tech.

Northwestern, a huge underdog in this matchup, surprised the No. 3-ranked Buckeyes by taking the lead at the end of the first quarter, 7-0, courtesy of Evan Hull scoring on a trick-play touchdown run.

The nation’s second-highest scoring offense only mustered up seven points in the first half against Northwestern, scoring its lone touchdown shortly before halftime on a run from Emeka Egbuka.

Miyan Williams rushed into the end zone from 27 yards out to give Ohio State a 14-7 lead in the third quarter, its first of the day. To celebrate, Williams did some snow angels in the wet Evanston weather.

It wasn’t pretty, but not all wins have to be. Williams tacked on another second-half score as the Buckeyes earned a 21-7 win on the road.

BEST OF THE REST:

History in the making

Notre Dame was unstoppable — to the shock of many — against No. 4 Clemson, shutting out the Tigers at home through three quarters.

Notre Dame cornerback Benjamin Morrison picked off QB DJ Uiagalelei and returned it 96 yards to the house to make it 28-0.

Double coverage? No problem for Michigan State wideout Jayden Reed, who reeled in a tough touchdown to extend the Spartans’ lead, 23-7.