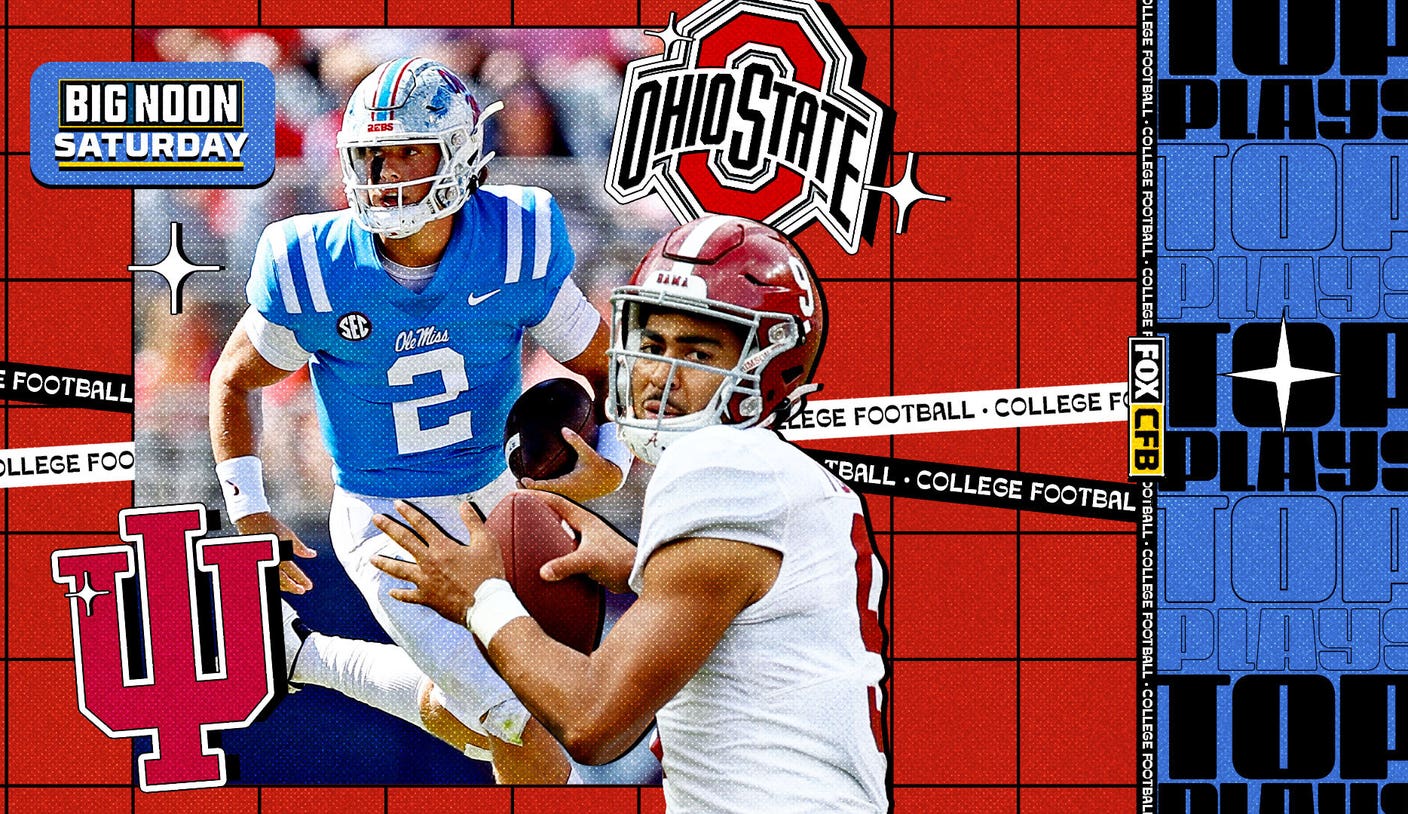 Week 11 of college football The season features several highly anticipated matchups across the board, and we’ve got you covered from start to finish for all the big games.

No. 2 Ohio State got off to a fast start and cruised to a 56-14 victory over Indiana. Meanwhile, West Virginia won a tough battle over Oklahoma in Morgantown, kicking a game-winning field goal as time expired.

On the afternoon slate, No. 14 Penn State currently hosts Maryland, while No. 9 Alabama faces No. 11 Ole Miss in a massive SEC contest.

Closing things, number 6 Oregon guests no. 25 Washington in a top-25 matchup, No. 19 Kansas State takes on No. 4 Baylor TCU is ready for battle number 18 Texas in an in-state rivalry game, and No. 12 UCLA hosts Arizona late in the game.

Here are the best plays on the board from Saturday’s Week 11.

Maryland at No. 14 Penn State

Nittany Lions on the board

Penn State had three players in the backfield on a fourth-and-1 and the run led to more than a first down for the Nittany Lions. Nicholas Singleton swept and hit the planes for a 45-yard touchdown to put his team up 14-0.

Putting the team on his back!

On another fourth-and-1 for the Nittany Lions, they ran the same play: a sweep to the right to Singleton with three sides out of the backfield. Singleton didn’t have as much green ahead this time, taking a Maryland defender on his back as he raced into the end zone for a 27-yard score to go up 21-0.

Ole Miss is on strike

Ole Miss running back Quinshon Judkins got the Rebels on the board first with this 1-yard touchdown run. With the score, Judkins has now scored in eight straight games, tying the school record for rushing touchdowns in a season.

what was going on here

An apparent miscommunication led to Alabama turning the ball over on fourth-and-1 in its own territory, leaving Nick Saban frustrated.

Bryce Young’s short pass found its way through the tight window to Jermaine Burton for a 19-yard touchdown pass that put the Crimson Tide on the board.

Judkins ran into the end zone for his second touchdown of the game. This time, he came out of the shotgun in a wildcat formation and ran straight down the gut for the 1-yard score to put Ole Miss up 17-7 in the second quarter.

Score on the side of the sun

Tight end Cameron Latu got open up the middle to throw a touchdown pass from Young to make it a 17-14 game at the half.

There is a better wide receiver in college football than Marvin Harrison Jr. and Ohio State’s Emeka Egbuka? Simple answer… no. Egbuka got the Buckeyes on the board first in this one with a 6-yard touchdown catch, giving Ohio State an early 7-0 lead.

CJ Stroud passed to Emeka Egbuka for a six-yard touchdown. The Ohio State Buckeyes lead the Indiana Hoosiers 7-0 early in the first quarter.

Hayden all the way

Dallan Hayden made it look easy on his 14-yard touchdown run to extend Ohio State’s lead to 14-0 in the first quarter.

AJ Barner climbed the ladder and rose to throw the 7-yard touchdown to get Indiana on the board.

Miyan Williams denied the Indiana touchdown by hitting the gas for a 48-yard touchdown run to give Ohio State a 28-7 lead.

Even after getting hurt, Williams had to throw an OH when he was carted off the field.

How did you get it?

Harrison made an unreal grab on the sideline, extending his right leg to get his foot down and secure the catch.

Stroud threw his third touchdown of the day early in the second half to extend the Buckeyes’ lead to 35-7.

Oklahoma’s defense came up with a huge play early on when Danny Stutsman sacked JT Daniels on the Mountaineers’ first possession.

Eric Gray scored the first touchdown of the game, rushing for a 12-yard score to give the Sooners a 10-0 lead late in the first half.

Less than a minute after the Oklahoma touchdown, West Virginia got on the board when QB Garrett Greene went for the score.

PAT goes the other way

Have some wheat with it!

Bryce Ford-Wheaton won the jump ball and secured the touchdown catch to give the Mountaineers a one-point lead in the third.

The Oklahoma running back ran past West Virginia for the score, which was his second touchdown of the day. The Sooners also got the two-point conversion to take a 20-13 lead.

False for the first one

West Virginia ran the fake punt well enough, securing a first down on the run by a matter of inches.

The West Virginia QB ran for his second touchdown of the day, getting to the outside corner and outrunning Oklahoma defenders for the score to tie the game at 20-20 in the fourth.

Legg has the leg

It didn’t look pretty, but West Virginia kicker Casey Legg’s 25-yard field goal went over the mountains to give the Mountaineers the win.