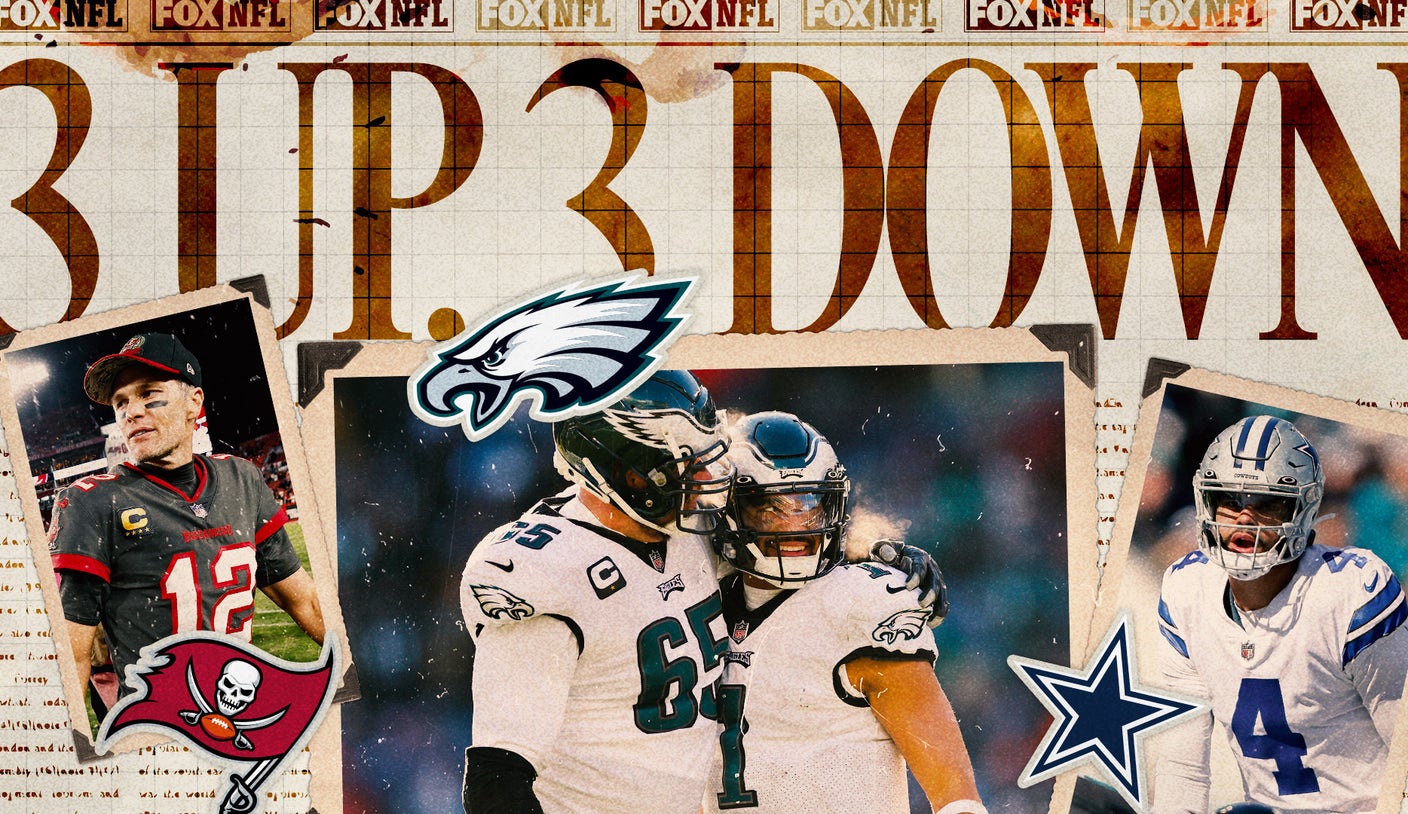 From a wild comeback in Minnesota to an incredible finish in Las Vegas, Week 15 provided a fantastic slate of NFL action. Here are the trends up and down the league.

The Eagles and Cowboys entered Sunday as favorites in their respective road games ahead of their big NFC East showdown next weekend. It was the perfect setup for a trap game, where you’re looking ahead to the next game and the effort level can drop against a weaker opponent. The Cowboys lost (more on that below), while the Eagles took care of business, beating the Bears by five points after trailing for most of the first half. The Eagles had three turnovers and allowed the Bears to rush for 157 yards. It wasn’t their best effort, but they won while their division rival lost. This is what elite teams do. Win when you’re not playing your best. A win for the Eagles next Sunday against the Cowboys will give them the division crown.

Playoff ranking is simple. The winner of each division, regardless of record, will host at least one playoff game. Wild card teams are ranked five through seven based on their records. While I’m generally in favor of structure in sports, it may be time to rethink NFL playoff seeding. A solution? Playoff seeding by record, throwing division records, and just seeding by top-to-bottom record. This would be the perfect year for that to happen.

One team must win the NFC South. None of the four options will have a winning record. The Buccaneers currently sit at 6-8, with the other three teams in the division at 5-9. None of those teams deserve to host a playoff game against a team like the Cowboys, who will finish with at least three more wins than any of those four teams. The four South teams have a combined 12 wins outside of their division. These teams have no joy. None of them are fun to watch. I can totally buy the argument that they shouldn’t host a playoff game. Maybe after this year, we will have some change in planting.

As recently as last weekend I called the Giants a pumpkin, a team that got off to a hot start but has been going downhill over the last six weeks of the season. Well, the pumpkin has been replaced. After a blowout win over the Commanders on Sunday night, the Giants are back in the playoff hunt and own the tiebreaker with Washington.

The Giants won against the Commanders with their rushing offense and defense, highlighted by first-round pick Kayvon Thibodeaux. Kayvon has consistently improved with more reps, which I thought would happen once he was in the NFL. His improvement was shown in a sack and fumble recovery for a touchdown. He also had multiple tackles for loss in that contest.

Kayvon was “red–flagged” during the draft process as reports surfaced about his character, work ethic and love of the game. It was all, pardon my language, BS And anyone who did a little research would have figured that out . Maybe I’m sensitive to the way the Oregon guys are discussed during the draft process because we often hear draft pundits knock the Ducks’ top picks for character issues. Remember when Justin Herbert wasn’t vocal enough to be a good NFL quarterback? Just silly. I’m glad Kavyon has improved, he’s going to be an impact player in New York for years to come.

The Cowboys always get me. every season I think they are better than they are, and then they show their true colors. They are scales. They cannot be trusted. The Cowboys won 27-10 in Jacksonville. Just play your game and come away with a win. No. The Cowboys turned the ball over, couldn’t get a stop, and eventually lost on a Jaguars kickoff in overtime. Dak Prescott has become a turnover machine, and the once ferocious pass rush can be tamed enough to allow Trevor Lawrence to do whatever he wants in the second half. The Cowboys also decided to try a third-and-long with less than two minutes left, instead of running the ball, which would have forced the Jags to use their final timeout. Guess how the Jaguars were able to stop the clock to kick a game-tying field goal? Yes. That final timeout. That loss essentially cost them the division, as they are two up on the Eagles with a must-win next weekend against Philly.

The Patriots and Raiders are tied at 24 with three seconds left in regulation. The Patriots are out of field goal range and punt to run out the clock. Rhamondre Stevenson hands off at the New England 45 and sprints forward through a Raiders defense just trying to avoid doing something stupid that could cost them the game. If Stevenson can’t score, his job is to go down without turning it over and send the game into overtime. That’s not what he did.

In a brain fart moment, Stevenson lateraled the ball to wide receiver Jacoby Meyers, who was trailing on the play after blocking his assignment. That’s when the play became one of the dumbest ends in NFL history. Meyers, who for no practical reason, looked to throw the ball backwards to run the “sideline play”. However, that play was not called and absolutely was not needed at that time. The game was tied. Overtime was approaching. Meyers found his target, quarterback Mac Jones, who was 20 yards behind the ball just waiting for overtime. Meyers turned to Jones and let him fly. The ball floated to Jones, and then out of nowhere, Raiders defensive end Chandler Jones stepped in front of the throw, scooped it up, carried Jones and raced into the end zone. I don’t think Meyers started the play with the intention of making an all-time mistake, but once he was thrown the ball, his instincts took over. Time to play the side game, I must have thought. Just completely wild.

I don’t want to be mean to the Vikings because they are doing what they are asked. Win soccer matches. This is the goal of this sport. However, the Vikings are the winningest team in the league (despite Saturday’s epic comeback). Minnesota is 11-3 and has clinched the NFC North. It’s a playoff team that will host at least one game this January. However, make no mistake, they have zero chance to win the Super Bowl, let alone the NFC conference.

This becomes apparent the more we see them play. The Vikings are 10-0 in one-goal games, which is unsustainable. At least in theory, because the Vikings are proving everyone wrong. For starters, what does the team do well? They are 19th in yards per play on offense and 30th in the same stat on defense. They are in the bottom half of the league in pass rushing and offensive line play. Of course, there is a quality to winning despite all these shortcomings, but they catch up to you when you play better teams. I just don’t see them as a viable conference competitor to the Eagles, 49ers or Cowboys. They were also smoked by the Lions, who could play in the wild card round.