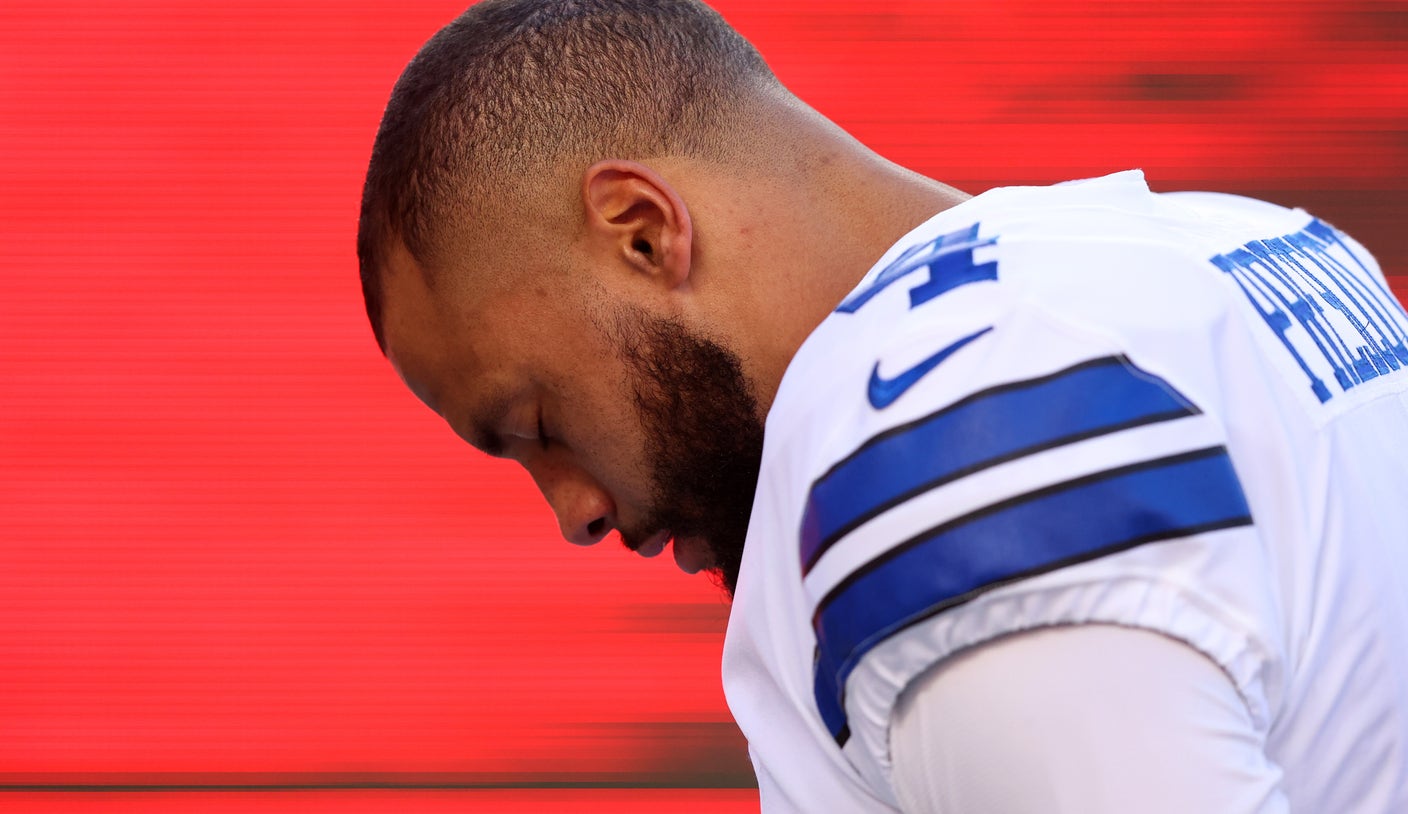 The Dallas Cowboys got a close-up look at how far they still have to go, figuratively, sure, but also literally.

It’s too fitting an image to ignore. Leading San Francisco, 19-12, with three minutes to play and three timeouts remaining, the Cowboys had the ball in Dak Prescott’s hands with 82 yards to pull them away from a tied game. They haven’t won a single one. Because of that, Prescott was lucky not to throw a pick-six right to 49ers linebacker Dre Greenlaw.

The Cowboys fell well short of their goal — a fitting image for a franchise now in its 27th season since returning to the NFC Championship Game, let alone the Super Bowl.

If you’ve watched it, you’ll know that possession wasn’t the end of the game. The Cowboys would go on a jaw-dropping final possession with less than a minute to play.

This is window dressing, though. This game was decided long before, with that three-play, zero-yard possession serving as a lasting reminder of just how short this offense fell.

“We just couldn’t come away with this one,” Prescott said. “Disappointed with my game, disappointed with the guys in the locker room.” Prescott will sit at the epicenter of this for the foreseeable future. After a career-best performance last weekend, the Cowboys entered this game knowing they would once again need their best to have a shot against a 49er defense. He didn’t come close to equaling that high.

Ironically, Prescott threw the first touchdown of the game, but the rest was woeful. He attempted 37 passes on the evening and finished with just 206 yards. And if that zero possession wasn’t the lasting image of Sunday, the two interceptions will be. Throughout the season, Prescott’s turnovers have been a constant topic of conversation, as his 15 regular season interceptions led the league despite appearing in just 12 games. He might have managed to avoid trouble in Tampa, but it returned with a vengeance at Levi’s Stadium on Sunday.

Prescott threw his first pick on just the eighth play of the day as Deommodore Lenoir jumped in front of a curl route with such ease he seemed to see it coming. About an hour later came the real game-breaker, as Prescott looked for CeeDee Lamb over the middle, missing Jimmie Ward in coverage in the process. Ward snapped the ball, flicking it into the arms of Fred Warner.

The pick came at San Francisco’s 12-yard line, denying the Cowboys a chance to grab a crucial lead just before halftime. There will be other moments that stand out, for sure. Dallas’ defense played well enough to win this game as it stifled the 49er rushing attack for most of three quarters. They made rookie sensation Brock Purdy work for every one of his 214 passing yards, while the 49ers averaged 3.5 yards per carry as a team. But in a game of snapshots, it will be hard to erase the mental image of a tipped Purdy pass falling through the hands of Trevon Diggs just 10 yards from the Dallas end zone. The pitch, one of the few that Purdy might want to return, was thrown into the air by Anthony Barr, but Diggs couldn’t wrap his fingers around it in time.

The play would have sent the Cowboys off the field with a 9-9 tie still intact at the end of the third quarter. Instead, Christian McCaffrey found paydirt just four moments later, and the Niners were in control in the final stanza. Special teams had their moments. While Kelvin Joseph forced a crucial fumble on a San Francisco punt return, Brett Maher had his only extra point attempt of the day blocked. And it’s a good bet KaVontae Turpin won’t enjoy watching the tape of his 44-yard punt return in the fourth quarter, as replay showed he was one point away from a potential touchdown.

It’s also impossible to forget that moments before Prescott’s costly red-zone pick, Tony Pollard was missed for the day with a sprained ankle. Aside from CeeDee Lamb, who was outstanding with 10 catches for 117 yards, Pollard provided the only thing resembling a spark for the Cowboys offense.

This all seems semantic, though. Those moments, good and bad, are guaranteed in any closely contested playoff game.

Kevin Burkhardt and Greg Olsen discussed the San Francisco 49ers’ big win against the Dallas Cowboys to advance to the NFC Championship.

The brutal truth is that Prescott had the ball in San Francisco’s red zone with 1:24 left in the first half and a chance to go ahead. The possession ended in a turnover. Hours later, despite everything that had happened, he had the ball with a chance to drive in the equaliser.

It wasn’t good enough, and the Cowboys are coming home. And with neither of the two NFC finalists, Philadelphia and San Francisco, looking likely to go anywhere anytime soon, so begins another attempt to rise to their level.