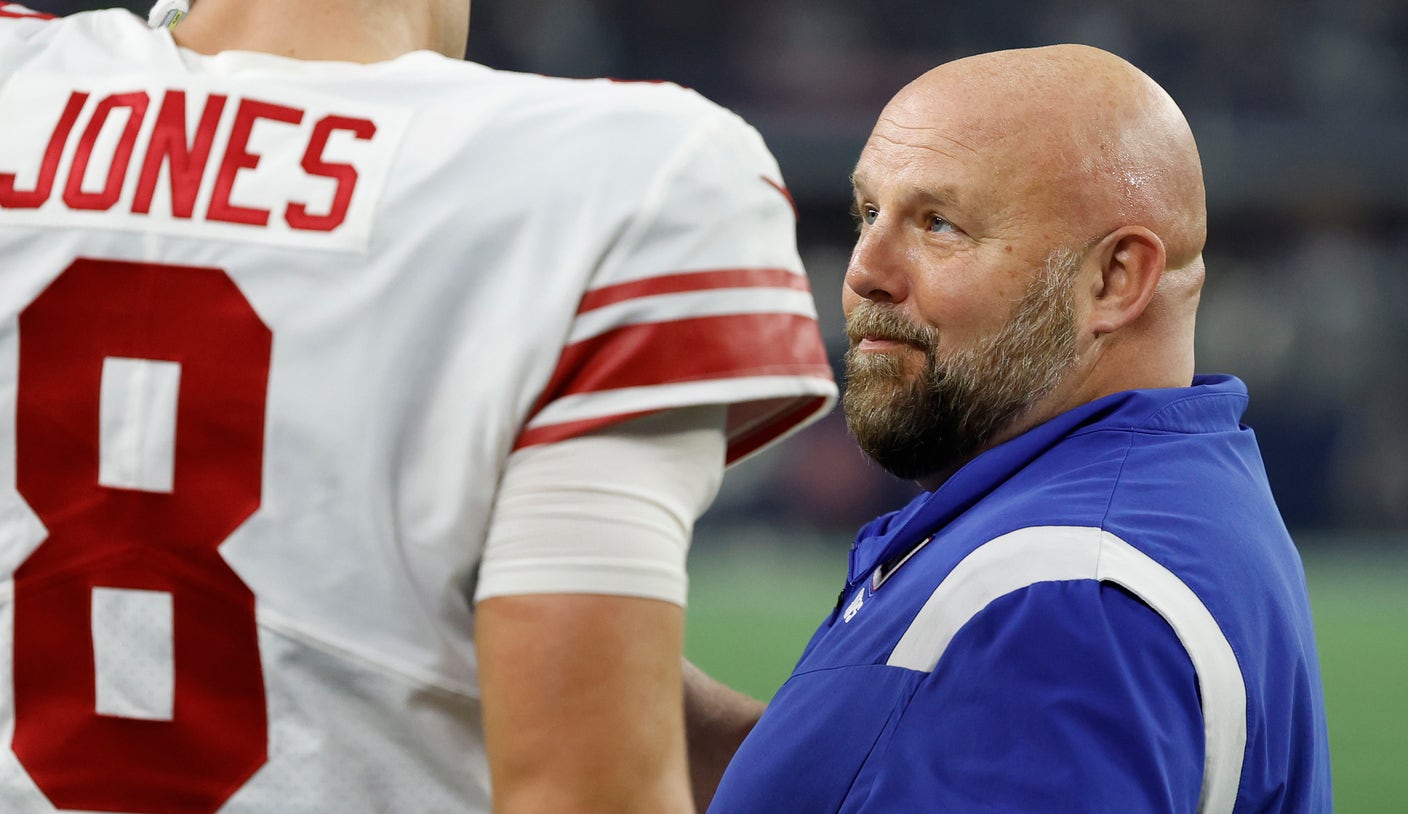 Brian Daboll has been telling his team all season to drag their opponents to the bottom to see if they can swim. The New York Giants have won many games in the fourth quarter by doing just that.

But here they are, headed toward the end of their season, and suddenly they’re the ones drowning.

Maybe that’s why the rookie head coach looked so furious during and after the Giants’ 28-20 loss to the Cowboys in Dallas on Thanksgiving. The Giants (7-4) have fought as hard as they can, with surprising results, all season, as they did when they took a halftime lead Thursday.

The Cowboys rally against the Giants

Dak Prescott threw for 261 yards and two TDs, rallying the Cowboys to a 28-20 victory over the Giants.

But lately, when it matters most, nothing goes his way.

They are making key mistakes on the field. They can no longer run the football. Saquon Barkley is not carrying them like he was at the beginning of the season. And the injuries pile up so high that they were forced into this game without three starting offensive linemen, two starting cornerbacks, a starting tight end, a starting safety and a receiving corps that has been a mess all season .

No wonder Daboll was banging on his headphones and yelling at the officials on the sidelines. It’s no wonder that in his post-match press conference, his answers were short and tense.

“I think it’s a tough loss. It’s a divisional game and a game we didn’t play our best,” Giants quarterback Daniel Jones said when asked about his coach’s tough nature. “It’s always disappointing. We didn’t do what we needed to do to win the game.

“It’s frustrating for all of us.”

There’s no doubt the frustration is starting to show for this rookie team, and the timing couldn’t be worse.

At 7-4, they are now closer to last place than first in the NFC East, and their cushion in the playoff race is shrinking dramatically. They are looking at a very dangerous last six games, including two games against the 9-1 Philadelphia Eagles, two against a Washington Commanders team that has won five of six and a game against the 9-2 Minnesota Vikings.

It’s a brutal stretch for a struggling team that has been brutalized by injuries.

“They don’t get any easier,” Daboll said. “Every week is tough.”

And he knows it will be more difficult for the Giants if they don’t get some of their injured players back, which is far from guaranteed.

And they were fortunate to get 39 yards and a touchdown from Barkley behind an offensive line that lost its starting center (Jon Feliciano), right tackle (Evan Neal) and left guards (Shane Lemieux and Josh Ezeudu ).

In fact, they’re down to third or worse at many of those positions, which only adds to the problem for a roster that wasn’t all that good to begin with. They can say “next man up” all they want, but at some point all these “next man ups” start to hurt.

And that’s where they are now, especially in attack.

“With the run game, everybody has to do better,” Daboll said. “The lock, the operation, the design … We need to do a better job all around.”

Easy to say, but look at what they’re working with. The Giants started three linemen — right tackle Tire Phillips, left guard Jack Anderson and center Nick Gates — who weren’t even with them in training camp and never figured to be key parts of that line . And left tackle Andrew Thomas was playing with an unspecified ailment.

Obviously, that would be a problem against the Cowboys’ dangerous front. It’s an even bigger problem with teams loaded to stop Barkley, daring Jones to throw to Richie James (5-41) and Isaiah Hodgins (3-31).

Still, it looked like the Giants were barely hanging on to that lead. So when they collapsed in the second half, which the Cowboys opened with three straight touchdown drives while the Giants had 85 total yards before their final garbage-time touchdown drive, no one I should have been surprised.

That’s what this season is starting to feel like. Daboll deserves coach of the year votes for getting the Giants off to a 7-2 start. They were playing way over their heads, but they were well coached and tough and they were getting wins in the fourth quarter.

Aside from Barkley, there was never much to like about his team, except that they won a lot more than they expected.

But after all that, they are losing control. It may take even better coaching over the last six games to keep this Giants team out of the water. His roster is the only thing thinner than his margin of error. They are playing with too many backups and third threads or worse to sustain any kind of success.

The Giants look like a team that is collapsing.

Not that Daboll was willing to entertain any of those thoughts Thursday, dismissing his struggles as “the ebbs and flows of a season.” When asked if he sees this as a crossroads for his damaged team, he responded before the question was finished.

“No,” he said. “I see us getting ready to play in Washington.”

That game is suddenly huge, because with a loss, the Giants could find themselves out of the NFC playoff picture.

Ready or not, they’re now at the tail end of the playoff race, the water is getting choppy, and they’re running out of time to remember how to swim.