This article has been translated from our Spanish edition using AI technologies. There may be errors due to this process.

The main attraction of the new social network the truth has started posting. This is Donald Trump the former president of the United States, owner and developer of the platform he created after being banned from Twitter on January 8, 2021.

The businessman and politician went up your first message last Friday with the phrase: “I’M BACK! #COVFEFE” . In the picture, you can see him checking his phone in the garden of a mansion. Although Social Truth, the social network developed by The Trump Media and Technology Group was released on February 21, and Trump had barely used it (except for a post he made on launch day announcing that he would soon start using the network; this post was shared on Twitter by Donald Trump Jr.). 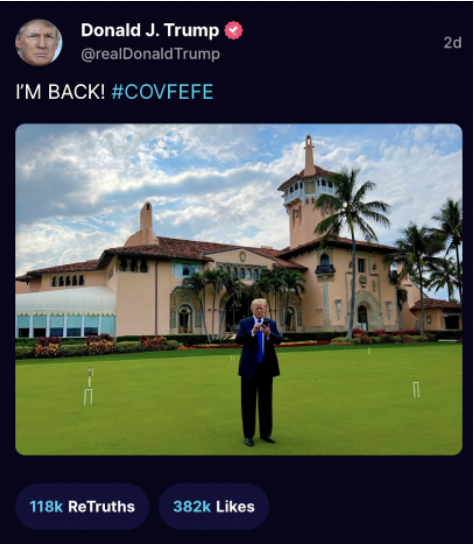 Friday’s message refers to one of Trump’s stellar moments on Twitter, when he used the term in a post with an error ( covfefe ) which caused confusion, sensation and then went viral. Since then, the former president has posted several messages, including one thanking people for their support in maintaining the social network as the lowest app in the AppStore.

Last week, Donald Trump declared that he would not return to Twitter, although he has changed hands and there is a possibility that his account will be restored. A couple of days after the statement, Elon Musk he winked at Trump by hanging him on his Twitter account an image post showing Truth Social as the most downloaded app along with the phrase, “Truth Social currently outperforms Twitter and TikTok in the Apple Store.”

Truth Social is currently gaining Twitter and TikTok on the Apple Store pic.twitter.com/RxawVUAYKH

Truth Social is currently only available to users in the United States. According to Market Watch, the app had an average of 513,000 active users per day in early April, still in beta.