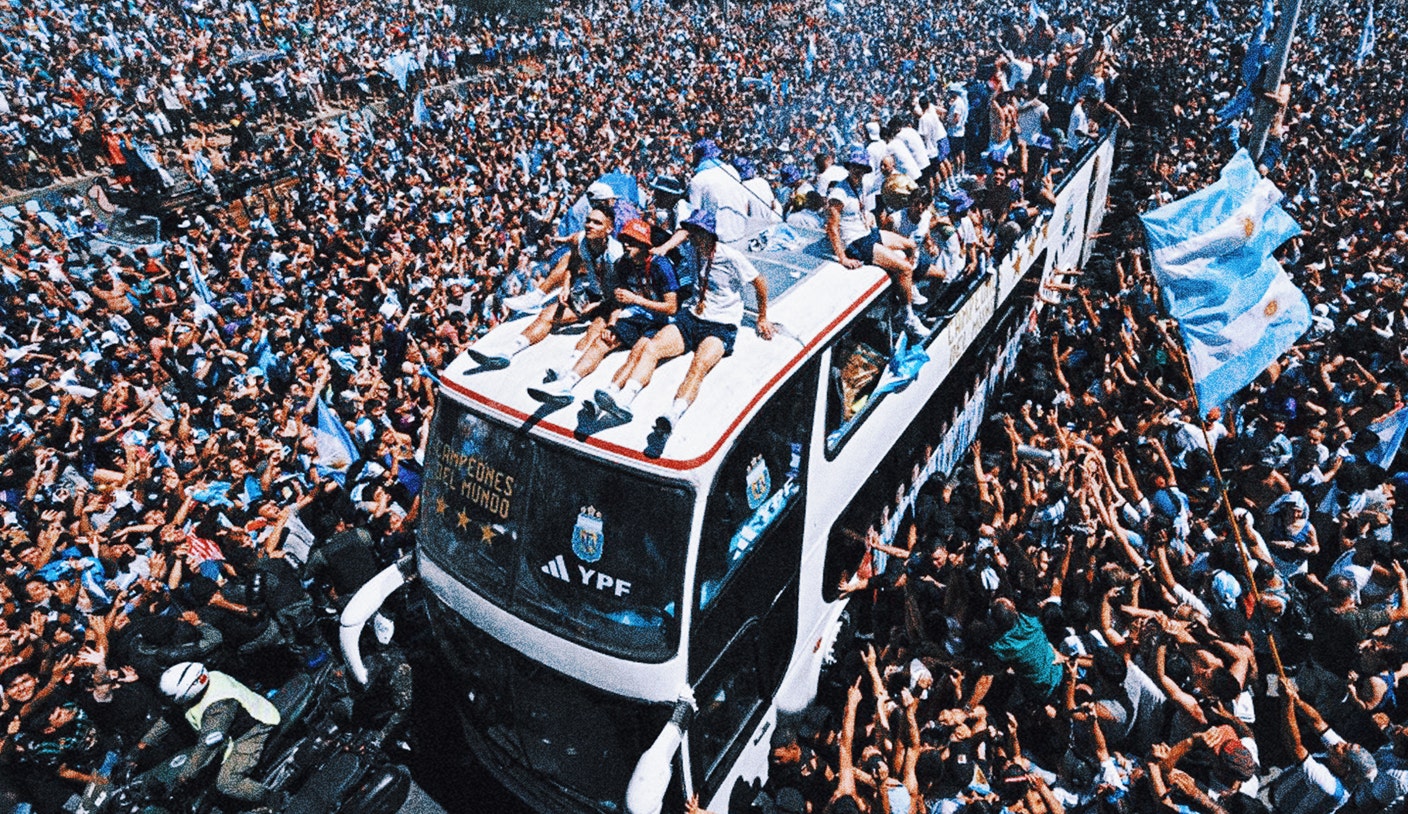 A parade to celebrate Argentina’s World Cup champions came to an abrupt halt on Tuesday as millions poured onto roads, highways and flyovers in a chaotic bid to catch a glimpse of the national team winning one of the greatest World Cup finals of all time. .

So many jubilant fans and waves of flags swarmed the capital that the players had to ditch the open-air bus that was transporting them to Buenos Aires and board helicopters for a government-provided flyover of the capital like an air parade.

“The world champions are flying over the entire route in helicopters because it was impossible to continue on the ground due to the explosion of people’s happiness,” Gabriela Cerruti, spokeswoman for President Alberto Fernández, wrote on social media.

After flying over key points in Buenos Aires where fans had gathered, the helicopters returned to the headquarters of the Argentine Football Federation outside the capital.

Some fans continued to celebrate in the streets, while others left Buenos Aires with long faces, complaining that they could not pay their respects to the team that brought home the first World Cup trophy of the country since 1986.

“We’re angry because the government didn’t organize it properly, so we could all celebrate,” said Diego Benavidez, 25, who had been waiting since early morning to see the team. “They stole the World Cup from us.”

Others, however, took it in stride.

“I’m not disappointed, we lived the party,” said Nicolás López, 33, who was in downtown Buenos Aires with his 7-year-old daughter.

The parade was called off shortly after two people jumped from a bridge onto the open-top bus carrying the players. One entered the bus, the other fell on the pavement.

The head of the football association, Claudio Tapia, blamed law enforcement for the change of plans. “The same security agencies that were listening to us are not allowing us to move forward,” Tapia wrote on social media. “I apologize on behalf of all champion players.”

By nightfall, when most of the fans had left downtown Buenos Aires, there were isolated clashes between a few stragglers and law enforcement. At least eight people were injured, according to local media reports.

The events began when the firemen went to the Obelisk, the emblematic landmark of Buenos Aires that is the traditional place of celebrations, to evacuate a few people who had broken down inside the monument.

The bus had been moving at a snail’s pace for more than four hours through the throngs of humanity before the parade on the ground was called off. Team captain Lionel Messi and the rest of the players waved to the massive crowd as they carried the World Cup trophy after clinching the country’s third title.

“This is crazy, it’s indescribable,” said Brian Andreassi, 23, as he walked downtown wearing a team jersey. “There are no words.”

The World Cup and the success of the team led by Messi brought much-needed good news to a country stuck for years in an economic crisis and suffering from one of the highest inflation rates in the world, with almost 4 out of every 10 people living in poverty.

“There is an immense union between all Argentines, unity, happiness. It’s as if you can breathe another air, there is another energy in the air,” said Victoria Roldán. “My body and my heart are about to explode.”

With a replica of the World Cup, the 32-year-old and her 36-year-old sister, Mariana, were eager to see the team and, in particular, their captain, Messi.

“We’re dying to see him,” Roldán said. “Seeing him with that huge smile, with those bright eyes full of hope, really fills our hearts with joy and happiness…I think Leo has been deserving of this for years, and this was his moment”.

The players were all smiles as they watched the crowd crowd in to get as close to the bus as possible. An estimated 4 million people were on the streets by Tuesday afternoon, according to local media citing police sources.

“I celebrate the way people took to the streets to honor our workforce,” president Alberto Fernández wrote on social media after the parade was interrupted.

Thousands of people had set up camp since Tuesday morning at the Obelisk.

The Argentine president declared Tuesday a national holiday, so that the country can celebrate the World Cup victory.

The song “Muchachos”, which was written by a fan and became a popular unofficial anthem for Argentina’s World Cup team, filled the streets as fans joined in to sing it over and over again.

Some fans also paid tribute to Argentine soccer legend Diego Maradona, the captain of the 1986 World Cup-winning team who died two years ago, with flags bearing his name and face. “This is for Diego, who sees it from heaven,” chanted the fans.

“This is a party. The last time Argentina was champion I was 3 years old, I don’t remember anything,” said Yael Torchinsky, 39. “I want to live this intensely because the Argentine people need this happiness.”

By mid-afternoon, fans began to fill Plaza de Mayo in front of the Government House, amid rumors that the players might go there to repeat Argentina’s 1986 World Cup victory celebrations there they celebrated The Fernández administration had offered the Palatine mansion, popularly known as the Pink House, according to Security Minister Aníbal Fernández.

The raucous welcome for the team began before dawn as thousands of fans lined their return from Qatar.

The players were beaming as they stepped off their plane in Ezeiza, just outside the Argentine capital, just before 3am on a red carpet. Messi was the first to leave, carrying the World Cup trophy, flanked by manager Lionel Scaloni, who put his arm around the captain as he walked past a sign that read: “Thank you champions” .

The team was greeted by rock band La Mosca singing “Muchachos”, and several players, including Messi, could be seen singing the words as they boarded the bus that took them to the Argentina FA headquarters of football.

The bus took an hour to travel the 11 kilometers (6.8 miles) from the airport to the AFA headquarters, where the players were greeted with fireworks, and then spent the night. In the morning, Messi posted a photo on social media showing him hugging the World Cup trophy next to him as he slept.