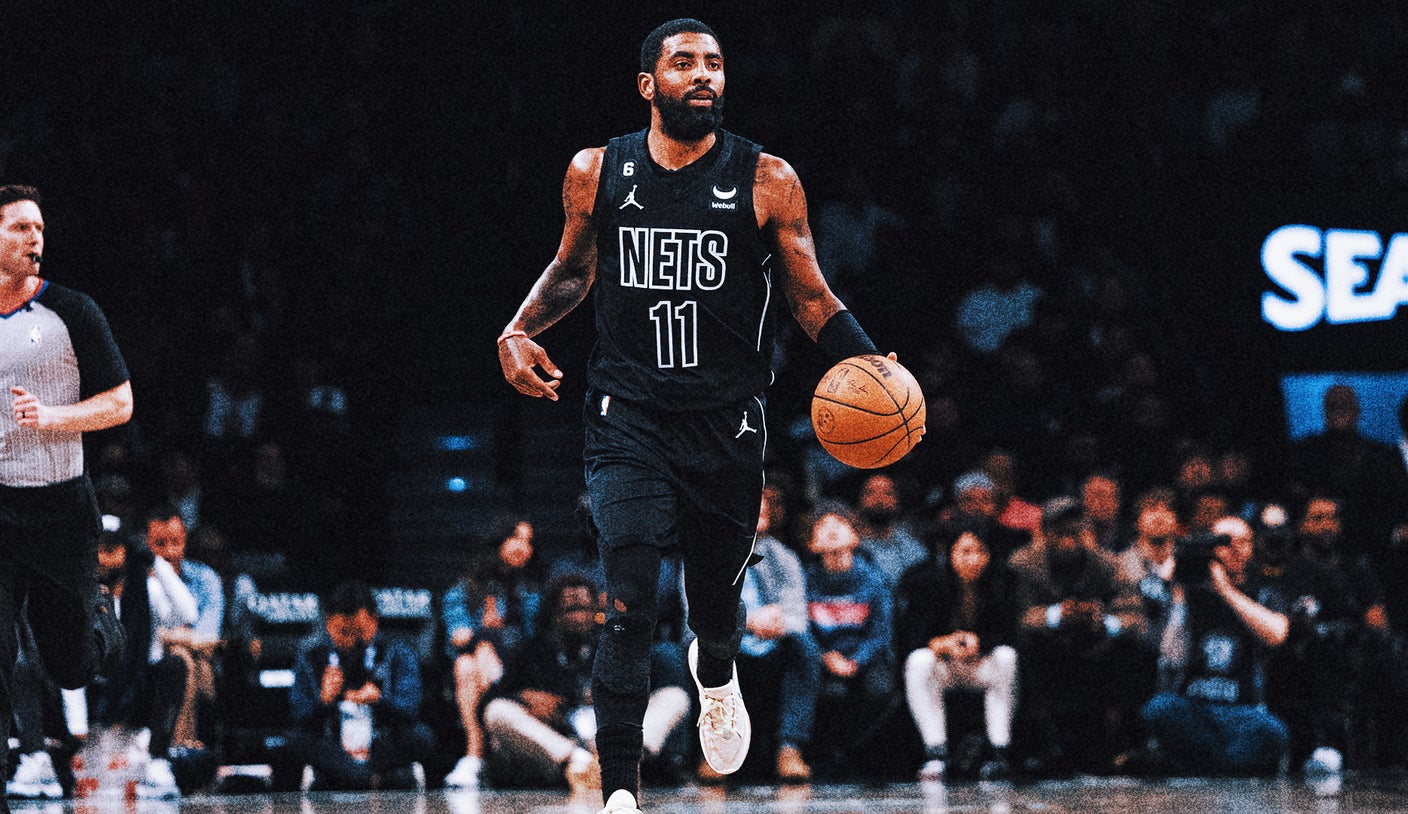 It would be hard to talk about the current state of the NBA without talking about Kyrie Irving and the Brooklyn Nets.

The Nets, a team many thought would have a bounce-back season with a healthier roster, have been in the news for all the wrong reasons: They parted ways with head coach Steve Nash after the season opener by 2-5; they suspended Irving for “not renouncing anti-Semitism”; and his top target to replace Nash, Ime Udoka, is serving a season-long suspension for an inappropriate relationship with a female Boston Celtics team member.

This week, our panel of NBA reporters: Rich Bucher, Melissa Rohlin i The Weitzman boy — looked back at how the Nets handled their PR nightmare and looked at what to expect from them in the coming weeks.

They also discussed the biggest stories elsewhere in the NBA and, more importantly, on the court.

1. Did the Nets do enough to punish Kyrie Irving? Why or why not?

Weitzman: To be honest, all this has exhausted me to the point where I can no longer think about Irving’s anti-Semitism. I wrote a whole piece here that covers my thoughts and feelings. Short version: The Nets waited too long and let Irving get away with too much. But your statement announcing his suspension was great. So I’ll give it to them.

Bucher: Not even the Nets are safe. That’s why they left it open: it’s five games, but the indication is that it could be more. What’s the problem. This all seems reactionary to public sentiment, not a team taking action to curb inappropriate behavior. I can’t help but think the Nets will decide whether five games is enough based on whether the world is ready to see Irving on a basketball court again.

Rohlin: I agree the Nets waited too long. But I also congratulate them for finally taking a stand. It’s no coincidence that as soon as they did, Irving apologized on Instagram. It will be interesting to hear what Irving has to say during his next press conference. So far, he has been unapologetic, defensive and dismissive. I guess the Nets will have to see his stance and tone change dramatically privately before they see him publicly.

The Brooklyn Nets have suspended Kyrie Irving without pay for failing to “state unequivocally that he has no anti-Semitic beliefs.”

2. Is there a world where the Nets can succeed without Kyrie Irving?

Weitzman: They are 2-6 right now; they were not successful with him either. good release

Bucher: Over the next five games? On paper? For sure. They currently play a team with a winning record, the Mavs 4-3. They’re on the road for five of the games, which gives them a chance to circle their wagons and help each other get through this, if they want to. But they haven’t shown solidarity this season, and their problems go far beyond Irving, especially where expectations lie. They are currently ranked as the worst defensive team in the league. Half the roster has worse defensive ratings than Irving, and that’s not because he’s playing defense — his rating is far and away the worst of his career without defense. Irving is a disaster. So are the Nets, collectively.

Rohlin: No team has had as much drama as the Nets. So far this season, Steve Nash has been fired, Kyrie Irving has promoted anti-Semitism, and Ben Simmons has been injured. Right now, this team is broken. I don’t see things changing anytime soon.

3. Can the sixers keep your head above water with James Harden out?

Weitzman: I think Harden missing a month is going to kill their chances of finishing with the top seed in the conference, which I thought they were capable of going into the season. But they still have Joel Embiid and Tyrese Maxey looks great and the defense is slowly getting better. they will be fine

Bucher: If the water line is .500, their heads are not above now. In fact, I think they could be better if they become more focused on Joel Embiid, like they did last year before Harden came on board. Also, his problems are on defense and *checking my notes* Harden has never been a defensive stud. The biggest issue will be getting Harden back in after a month of playing without him.

Rohlin: Embiid kept the team well above water last season without Ben Simmons. He is able to do the same while Harden is out. He has to put the team back on his shoulders until Harden returns. The bigger issue here is that Embiid and Harden will experience a huge delay in building some much-needed chemistry and continuing to learn each other’s games, which could slow the team’s progress down the line.

4. You are buying or selling Russell Westbrook’s production off the bench? Why or why not?

Weitzman: Neither? Both of us. I think we can all agree that a bench role is best suited for Westbrook at this point in his career. Let him in, push the ball into the open floor, get some easy buckets, yada yada. But this Lakers team is completely broken and flawed, and it doesn’t matter if Westbrook comes off the bench or starts; as long as they’re shooting below 27 percent from deep, they have no chance.

Bucher: I am absolutely buying this mini-resurgence. It allows Westbrook to play a fairly simple role he’s familiar with: P&R ball handler with a big roll at the rim. Westbrook has always been the best with the ball in his hands and the options, A or B: shoot or dish/lob my big man. He’s a tough 2v2 player. Full 5v5 floor general, a la Chris Paul? Not his strength. Figuring out how to be effective playing with or with LeBron and, to a lesser extent, Anthony Davis, is too complicated. Someone who worked closely with him in the past told me that the key to getting the best out of Russ is to make it clear what you need from him. Don’t ask what he’d like to do – it makes him nervous because he suspects you don’t know what’s best for him or the team. He may not like the role, but he will do it to the best of his ability.

Rohlin: This was the best move Lakers coach Darvin Ham could have made. Westbrook looks much more comfortable in his new role. His game has opened up, he’s being more aggressive and he’s playing with a lot more joy than we’ve seen since he came into the team. Once Westbrook swallowed his pride and accepted he wasn’t going to start, there’s been a new levity about him, and his production on the court has greatly improved. During the last two games, he has made +18.

Colin Cowherd praises the Lakers for adjusting despite a tight win against a depleted Pelicans team.

5. Which young star has made the biggest leap this season?

Weitzman: How about Shai Gilgeous-Alexander, who is playing so well that the Oklahoma City Thunder will have to come back from an injury to get him off the court and stop winning games? The Thunder tank is 4-4 right now. They’ve won so many games because Gilgeous-Alexander has been unstoppable. He averages 32.3 (!) points, to go along with 6.3 assists, 4.7 rebounds and 2.4 steals per game. He’s shooting a ridiculous 54.5 percent from the field. It seems like forever, but Gilgeous-Alexander is still only 24 years old. He’s showing that he’s someone who can take the Thunder to the next level, as soon as management decides he’s ready to roll, you know, try to win games.

Bucher: SGA is a great option. Do we count Lauri Markkanen as a youngster? If so, that’s my choice. He’s the Jazz’s leading scorer and plays with an aggression we haven’t seen from him outside of a Finland jersey. He has 20 digs in nine games, the most he had in a season before this was his rookie year, 63 in 68 games. This is just a reflection of how assertive he has been.

Rohlin: Does Giannis Antetokounmpo count as a young star? If so, I’ll go with him. He has been spectacular this season, leading the Bucks to the only undefeated record (7-0) in the league. He had a career-high point total in a recent four-game stretch, and is averaging 33.6 points and 12.7 rebounds per game. If he continues to play at this level, expect to see him on your TV in June.