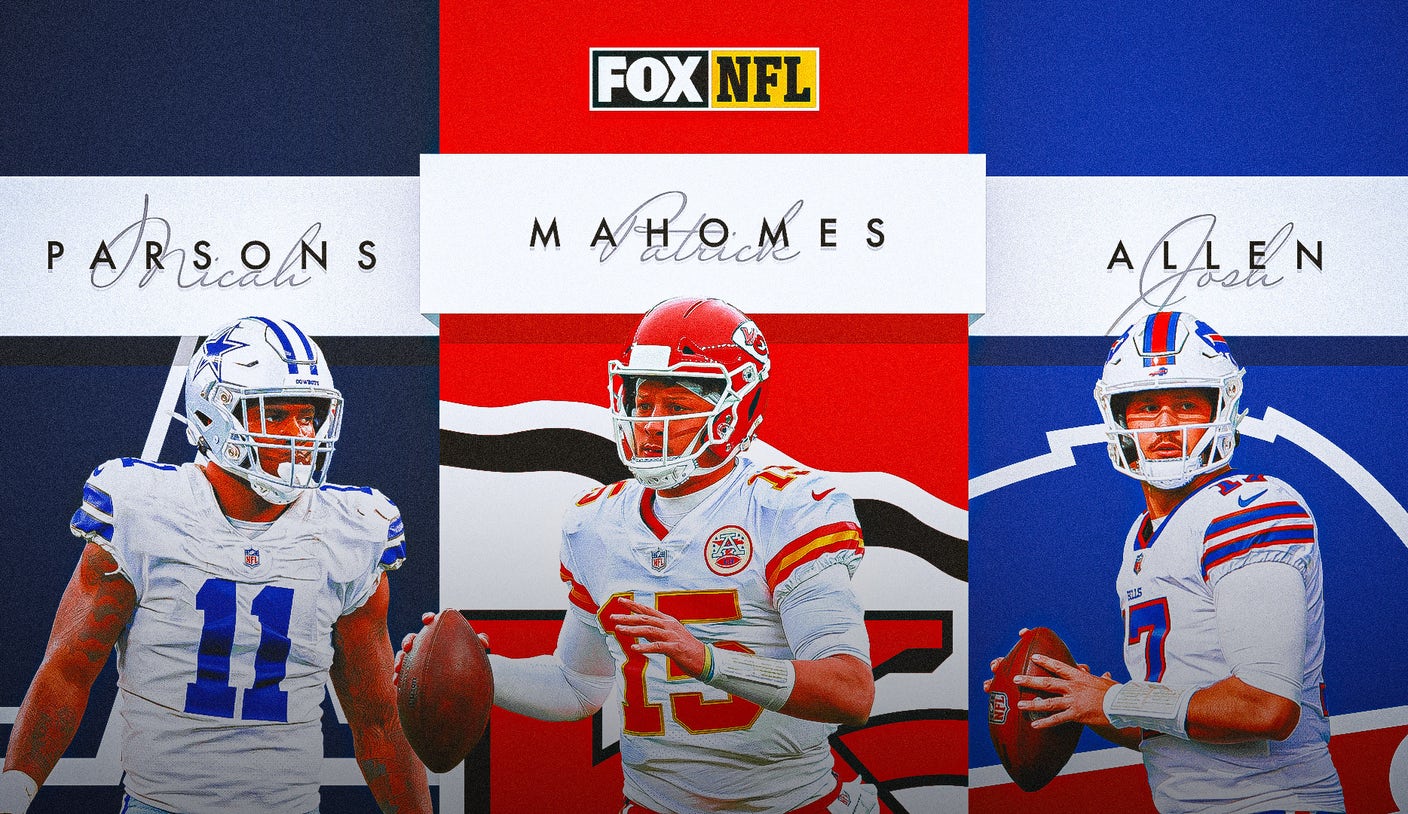 As we sit between Weeks 9 and 10 of the NFL season, we’ve seen some spectacular performances. Young quarterbacks are taking over the league, pass-rushers who are new to the league or to their teams are creating carnage, and we’ve seen an influx of phenomenal young cornerbacks. There’s one undefeated team left, but the league is still considered wide-open.

With that in mind, FOX Sports’ staff of NFL writers voted on a variety of midseason awards and made predictions about which teams will face off at Super Bowl LVII in Glendale, Arizona — and on FOX.

Don’t give him the Michael Jordan treatment. Just because Mahomes is more of an old-news candidate than Jalen Hurts, it doesn’t mean the Chiefs QB deserves the MVP trophy any less. What other quarterback could excel like this in the season after losing his top receiver? Not Aaron Rodgers. What other quarterback can excel year after year? Only Tom Brady. As well as Hurts is playing, he has the best supporting cast in the NFL. Mahomes is doing this without that degree of help. —Henry McKenna

Does Mahomes deserve to be MVP favorite after win vs. Titans?

Patrick Mahomes threw for 446 yards and one passing touchdown and added 63 rushing yards and a touchdown of his own to pull out a 20-17 win for the Chiefs. Shannon Sharpe explains why Mahomes should be the MVP favorite.

This isn’t exactly fair to Josh Allen or Patrick Mahomes, as they’ve both been outstanding. But I came into the season thinking quarterback might be the Eagles’ Achilles’ heel. Instead, Hurts has been one of their greatest strengths. He makes plays with his arm and his legs, and more importantly, he rarely makes mistakes. Hurts is the biggest difference between the Eagles being a middle-of-the-pack team and having the best record in the league. —David Helman

He’s been worth every pick and penny the Dolphins paid for him. Hill has transformed an already dangerous passing attack and quarterback. He might end up leading the league in receiving yardage by a record margin. —Ralph Vacchiano

Will Tyreek Hill have the best WR season of all time?

Tyreek Hill has 1,104 receiving yards in his first nine games of the season, which is the most in NFL history during that span. Nick Wright puts Hill’s start for the Dolphins into historical context.

He’s the Titans’ entire offense, especially with QB Ryan Tannehill out and rookie Malik Willis starting in Tannehill’s place. Willis has just 11 pass completions combined in his two starts and had passer ratings of 35.4 and 49.0. Miraculously, Tennessee won his first start — and it was solely thanks to Henry, who rushed for 219 yards against Houston. Henry has five games this season with more than 100 yards rushing while coming off a broken foot that caused him to miss the majority of last season. —Carmen Vitali

With all due respect to all the other great pass rushers in this league, there’s just something special about a guy who can line up anywhere depending on the matchup and still succeed. Between getting sacks, scoring touchdowns, drawing double teams and making hustle plays at every level of the field, it’s hard to quantify his impact. —Helman

Look, I understand all the love for Micah Parsons and his elite versatility, but Patriots edge rusher Matthew Judon is wrecking opponents at a consistent clip — arguably higher than any player in football right now. He’s first in sacks, second in quarterback hits and fourth in tackles for loss entering this weekend’s slate of games. —Ben Arthur

Colin Cowherd picks his NFL midseason award winners, including his selection of Micah Parsons for Defensive Player of the Year.

It’s crazy enough to think about what Geno Smith is doing for the Seahawks in the present. If you weren’t taking them seriously as a playoff team before, you should be now. But on top of that, think about how Smith’s amazing season could affect the future. Will he play well enough for the Seahawks to sign him to a lucrative new contract? Might he be a hot commodity in the offseason, if he’s allowed to reach free agency? I can’t say a potential Geno Smith Sweepstakes is something I ever saw coming. —Helman

A few weeks ago, a reporter in Seattle told Smith he was surprised by his success. Smith responded “That’s because you never watched me throw.” As someone who watched him throw in college, with the Jets, and even with the Giants, I am stunned. There was never, ever an indication he had this in him. —Vacchiano

The Broncos went all-in on what they thought was a Super Bowl-caliber roster, essentially compromising their future to acquire a franchise quarterback in Russell Wilson. But that has blown up in their face. Wilson, a perennial Pro Bowler, is somehow playing the worst football of his career in an offense that was supposed to magnify his strengths. Nathaniel Hackett is on track to be an all-time bad coaching hire. Injuries have mounted. Bradley Chubb is gone, traded at the deadline. The Broncos got a much-needed win in London before their bye, but it was the Jaguars they beat. Denver’s season has been a disaster to this point. —Arthur

Richard Sherman on why Russell Wilson is struggling

Former Seahawk Richard Sherman said on Von Miller’s podcast that it almost seems as if the Broncos did not watch tape of QB Russell Wilson before trading for him. Colin Cowherd explains why he agrees with Sherman.

It’s tempting to take the Raiders and Broncos here, but at least those teams have to share a division with Patrick Mahomes. The Colts looked like a team with an easy path to the playoffs, given the talent on their roster and the sorry state of the AFC South. Halfway through the season, they’ve looked terrible in most of their games, benched their MVP quarterback and fired their head coach. Hard to get more disappointing than that for a team that had very real playoff aspirations. —Helman

He’s 28 and missed half of last season with a broken foot, yet he’s running like he’s 22 and never had an injury in his life. Amazing. —McKenna

We absolutely love a petty king. And that’s exactly what Vikings edge rusher Smith is after signing with a division rival because the Packers refused to commit to him through his back injury. He’s nearly in double digits on sacks. Speaking of which, why aren’t we talking about Smith and Danielle Hunter more? They have a combined 13.5 sacks at this point in the season and lead a unit that is top-10 in sacks league-wide. Meanwhile, Green Bay has just 17 sacks as a team through nine games, which is tied for 20th in the NFL. —Vitali

Do you realize that Walker didn’t get more than eight carries in a game until Oct. 16, and he’s already racing toward the league’s top 10 in rushing? Provided he stays healthy, he’s going to finish with more than 1,000 rushing yards and be a big part of the Seahawks’ playoff push. —Helman

Look for Pierce to continue to get the ball at a higher and higher clip, with Davis Mills’ inconsistencies and a weak wide receiver room. The Eagles game, when he had a career-high 27 carries and his second career 100-yard rushing game, was just the start. He’s indisputably the engine of Houston’s offense. —Arthur

He’s a real candidate for the Defensive Player of the Year. I’m serious. He ended the Bills’ last gasp in their loss to the Jets in Week 9 with a pass breakup on Buffalo’s final offensive play. Gardner has shut down top NFL receivers, and he and fellow corner D.J. Reed are crucial contributors to the Jets’ stunning emergence this season. Gardner deserves this more than any other rookie. —McKenna

I know he’s hurt right now, but how many times have you watched an Eagles game and said to yourself, “Oh my God, Jordan Davis?” If you’re watching closely, I’d bet more than once during any given game. He has made an instant impact on a unit that doesn’t get talked about enough due to Philadelphia’s offensive success. They’re winning because both sides of the ball are clicking — and as a rookie, Davis has as much to do with that as anyone this far into the season. —Vitali

Which NFC team will play in the Super Bowl? Tie between Philadelphia Eagles and San Francisco 49ers

Don’t let the record fool you. The Niners have as much talent as any contender in the league, and their core contributors have all been through the rigors of the NFL postseason. That’s a tough combination to beat. —Helman

The Eagles are not perfect, but they are really close. They can beat anybody in nine different ways, and sometimes they use them all at once. —Vacchiano

I’m riding with the team with the best offensive and defensive line combination in the NFC. It does worry me that the Eagles start fast and finish slow, as that’s a difficult formula to win when you’re playing the best teams in the conference. However, the Eagles will get a bye and have two home games. Good luck winning in The Linc. —Geoff Schwartz

Are the Eagles the best team in the NFL?

The Eagles are the only undefeated team left in the NFL. Does that make them the best? Will the Cowboys stop their reign? The FOX NFL Kickoff crew debates.

I made this prediction before the season started and I’m just going to stick to it. The Vikings were overhauled this offseason with a new general manager and head coach, so they’re still figuring themselves out — but they’re winning while they do it. They’re going to be battle-tested by the time the playoffs come around and may just hold up better than anyone else all the way to the Super Bowl. —Vitali

Which AFC team will play in the Super Bowl? Buffalo Bills

It’s going to come down to them and the Chiefs, and it could be a toss-up in the AFC championship. But when Josh Allen is on, he’s the best player in the NFL. And the Bills defense is pretty dangerous, too. —Vacchiano

I picked the Chiefs to win the whole thing before the season, so I’m not about to back off now. When the chips are down, I feel just fine betting on Patrick Mahomes to make the difference — as his superhuman effort last weekend against the Titans reminded us all once again. —Helman

Which team will win the Super Bowl? Buffalo Bills

I’m picking the Bills with the thought that Josh Allen will be in the mix this year. Of course, the upcoming diagnosis for his UCL injury looms large. But if Allen is able to play the full season, he and the Bills have the most complete roster in the NFL. They have every ingredient they need, even if they aren’t quite as consistent — yet. By season’s end, this Bills team will be an unstoppable force. —McKenna

Like I said, they’ve got the best quarterback walking planet Earth right now. They added some juice to their offense by trading for Kadarius Toney, and I’m excited to see how they get him involved. When you have that stuff working in your favor, the defense only needs to be good enough, and I think it is. —Helman

This poll was compiled by:

Get more from National Football League Follow your favorites to get information about games, news and more