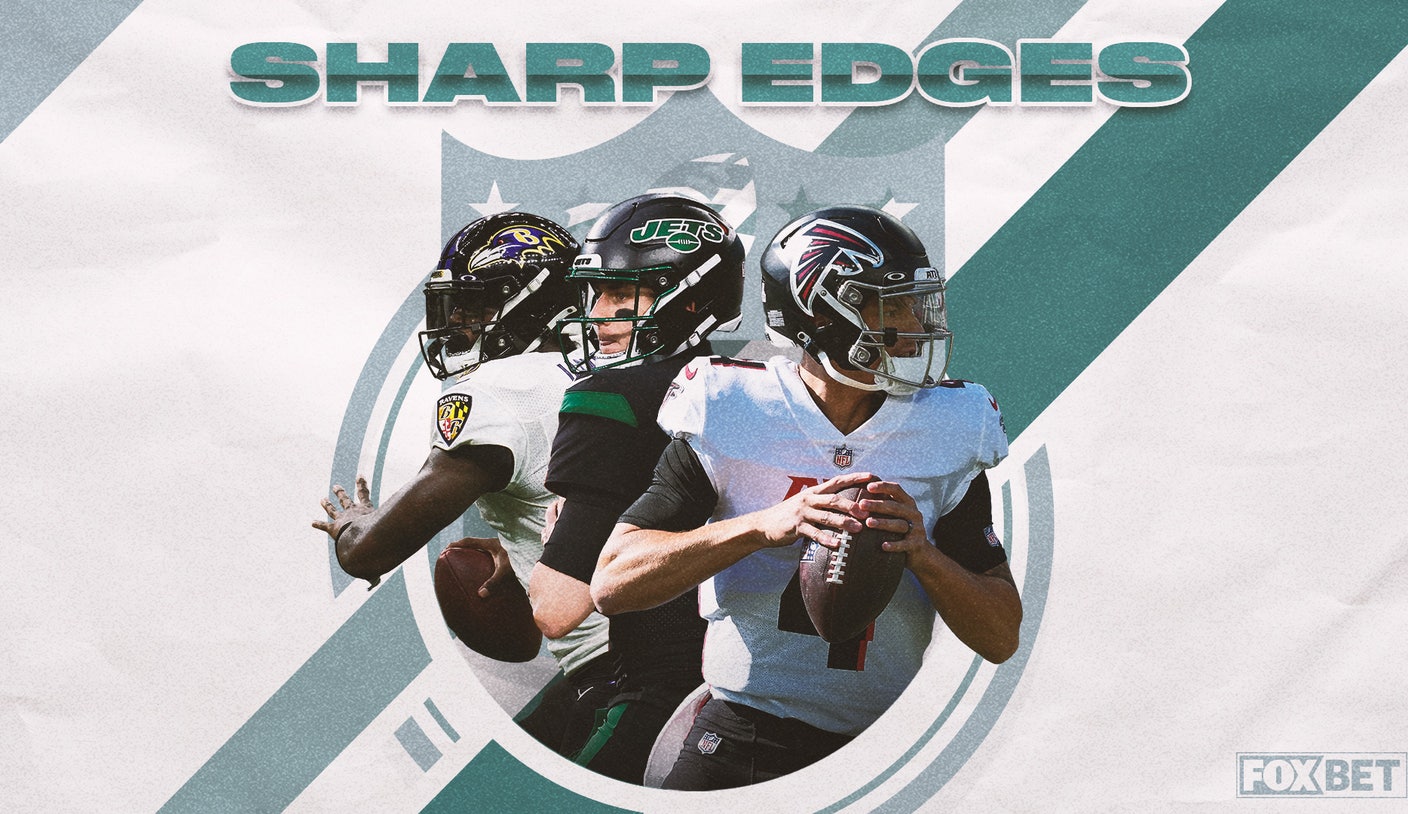 This week’s NFL slate features some great matchups with playoff implications. As for betting, one game I’m keen to this weekend involves the Falcons taking on the Saints on FOX and the FOX Sports App.

Regarding how you should wager on the slate as a whole, I ran my models to give you my favorite betting edges and predictions for Week 15 of the season. My goal for this weekly column is to always provide you with nuggets you didn’t know before reading this piece.

A couple of matchups stuck out from a betting perspective, so let’s look at my favorite edges of the week with odds courtesy of FOX Bet.

Odell Beckham Jr. to Cowboys ‘could break’ according to Jerry Jones

The Falcons don’t really throw the ball often or short.  When they do throw, they tend to throw deep.

No team threw a lower rate of passes between 1-5 air yards than the Falcons (20%).

But the problem with throwing deep was that Mariota was terrible when doing so. In fact, he was basically the worst QB in the NFL when doing so.

Out of 40 QBs in the NFL with at least 100 attempts this season, when passing over 20 yards downfield, Mariota ranked:

In other words, he was one of the worst QBs in the NFL.

Atlanta won’t need Ridder to do too much.  After all, Atlanta ranks 32nd in early down passing rate in neutral game state. So this isn’t a case where Ridder will be chucking the ball a lot.

But Atlanta doesn’t need to chuck the ball a lot to score points.

On the season, Atlanta scored the 15th most points per drive, the 17th most touchdowns per drive, had the fourth fewest three-and-outs per drive and ranked ninth in red zone efficiency.

So they shouldn’t be considered a bad offense that didn’t score because they didn’t pass the ball. They actually rank as the 12th-best offense overall and were above average in scoring points.

It’s actually the perfect offense to insert a rookie quarterback into. Particularly after a bye and particularly late in the season.

So if Marcus Mariota was supposedly the better QB, what does Desmond Ridder bring to the table?

Although the sample size is really small, here is what Ridder did throwing over 20+ yards to guys that wouldn’t make the team in the preseason vs Mariota.

Over the second half of the season, the Saints defense improved enough to rank average in pressure rate after being one of the worst teams in the NFL. And their run defense has likewise improved to rank league average in EPA/rush and opponent yards before contact per rush.

But with a bye week to prepare, I expect this offense will be creative enough to see success against the Saints defense.

On the other side of the ball, I expect big things from this Saints offense.

While that sounds like an oxymoron, the reality is no offense in the NFL played a tougher schedule of defenses over the second half of the season than the Saints. They played the following:

Every one of those teams ranks above average, most are top-10 defenses.

Meanwhile, the Falcons defense has done nothing since Week 8 but play bottom-10 offenses.

The Saints aren’t a good offense, but finally playing the No. 30 defense they’ll look competent. And when the Saints have faced bottom-10 defenses, they are averaging over 28 ppg. Atlanta has allowed opponents to score on 51% of their drives on the road this season, the highest rate in the league.

I’d look towards the Over but wait to see if you can grab 42.5 should this get bet lower.

Did Colin get it right?

The Browns are one of the worst bets in the NFL when they play at home.

You might not believe it, considering they’ve won 61% of their home games over the last four years (three of which were with Kevin Stefanski), but the Browns have covered the spread in just 11 of 31 home games since 2019.

That’s the second-worst cover rate in the NFL.

If that’s not bad enough, the Browns match up well with some divisional foes and poorly with others.

Under Kevin Stefanski, the Browns are:

To summarize, recent history shows the Browns are:

Whereas the Browns match up well against the Bengals, they match up terribly vs. the Ravens.

And this version of the Browns?

To beat the Ravens, you need to throw on them.

Baltimore ranks sixth against the run.

You have to pass the ball.

But the Browns are a run-first offense with a quarterback who is performing among the worst in the NFL because he’s still shaking off the rust and isn’t close to being in game shape.

The last two weeks, the Browns have faced the Texans and Bengals defenses. Both are worse vs. the run than the pass. And yet the Browns RBs rank 23rd in EPA/rush.

A big part of that is because they rank 29th in yards before contact per rush.

And a big part of that is the offensive line. They lost Center Ethan Pocic in Week 11 vs. the Bills. He was PFF’s second-best run-blocking center.

Before Pocic’s injury, the Browns ranked third in EPA/rush and No. 13 in yards before contact per rush. They’re bottom-10 in both since his injury.

More stress has fallen on the passing game and, thus, on a quarterback who is not prepared to carry an offense.

On the other side of the ball, cementing this terrible matchup for the Browns is the fact they are absolutely terrible vs. the run, and with the Ravens expected to start backup QB Tyler Huntley, they will lean even more on the run.

On the season, the Browns run defense ranks No. 32 in EPA/rush and No. 31 in yards before contact per RB rush.

And over the second half of the season, the Browns run defense ranks No. 32 in both EPA/rush and in yards before contact per RB rush.

Looking back at every team in every season since 2000, no team has allowed an EPA/rush to RBs worse than the 2022 Browns.

And the yards before contact per RB rush they allow is the third worst since 2017.

This is a perfect matchup for the run-first Ravens, with a backup QB on both sides of the ball. Since these teams last played in Week 7, Baltimore has allowed a league-low 319 rushing yards (53.2 per game) and 2.77 yards per carry.

I don’t envision the Ravens winning this game by a large margin, as every game they play is a tough grind. But it wouldn’t shock me to see the Ravens not only cover the spread but win outright.

Greg Jennings tells Craig why he believes the Lions are absolutely heading into the playoffs.

This game features a massive pivot for the Lions.

In fact, this game and the Lions’ last game against the Vikings are nearly as diametrically opposed as you can get.

We know the splits are massive for the Lions, home vs. road.

In home games, the Lions rank number 1 in:

In road games, the Lions rank:

They literally move from first to near-worst in most of these scoring efficiency metrics on a per-drive basis.

The Lions have played only five games against defenses that rank above average. Three of those five games came at home. They lost two of those three games (though primarily because the defense gave up too many points).

The two road games they played when facing above-average defenses were in New England and Dallas.

They scored a TOTAL of six points in those two games.

For the first time since that Week 7 loss to the Cowboy, the Lions will play on the road against a defense that ranks above average.

And the Jets are more than just “above average” – they are the sixth-best defense in the NFL.

But against man coverage? Jared Goff ranks below average, at only +0.01 EPA/att.

The only QB with a similar rate of dropoff is Russell Wilson, who shifts from +0.03 EPA/att vs. zone to -0.50 EPA/att against man coverage.

The Vikings, who the Lions just played, are literally the worst defense in the NFL vs. play action. The Jets are the best. Going from 32nd to first.

Over the second half of the season, Goff’s splits with and without play action:

On account of these factors, I think the Jets defense should surprise by being one of the few to really limit this extremely productive Lions offense.

Dr. Matt breaks down the non-contact knee injury for Arizona Cardinals Quarterback Kyler Murray and how long the star could be out.

Russell Wilson is questionable, and I’m going off the assumption he won’t play on Sunday. That leaves Brett Rypien. We last saw Rypien start in Week 7 vs. the Jets. He averaged just 4.9 YPA but threw the ball 46 times and recorded 0:1 TD: INTs. However, the Cardinals defense is far worse than the Jets defense.

The Cardinals will be starting Colt McCoy, who is filling in for the injured Kyler Murray. His prior three starts have come against tough defenses: the 49ers and the Rams. Unfortunately, he’s got another in the Broncos.

The only element at all that stands out to me in this game is DeAndre Hopkins’ receptions prop. McCoy has targeted Hopkins on 34% of his throws, with Hopkins posting games of 10-98-0, 9-91-0, and now 7-79-0 in the weeks McCoy has been under center.

The Broncos are great vs. boundary receivers, holding them to only 5.7 yards per target, which is the lowest in the NFL. So I would not be interested in betting his yardage over. But with Rypien operating a more erratic offense which might be even less consistent, and with the Cardinals a dog on the road, and Kingsbury letting McCoy throw frequently, I expect Hopkins will still have plenty of targets.

In McCoy’s starts, he was lined at 5.5 and 6.5 receptions. So long as he’s not lined higher than 6.5 receptions, I would be interested in the Over.

Warren Sharp is an NFL analyst for FOX Sports. He is the founder of Sharp Football Analysis and has worked as a consultant for league franchises while also previously contributing to ESPN and The Ringer, among other outlets. He studied engineering before using his statistical acumen to create predictive football models. You can follow Warren on Twitter at @SharpFootball.

Get more from National Football League Follow your favorites to get information about games, news and more