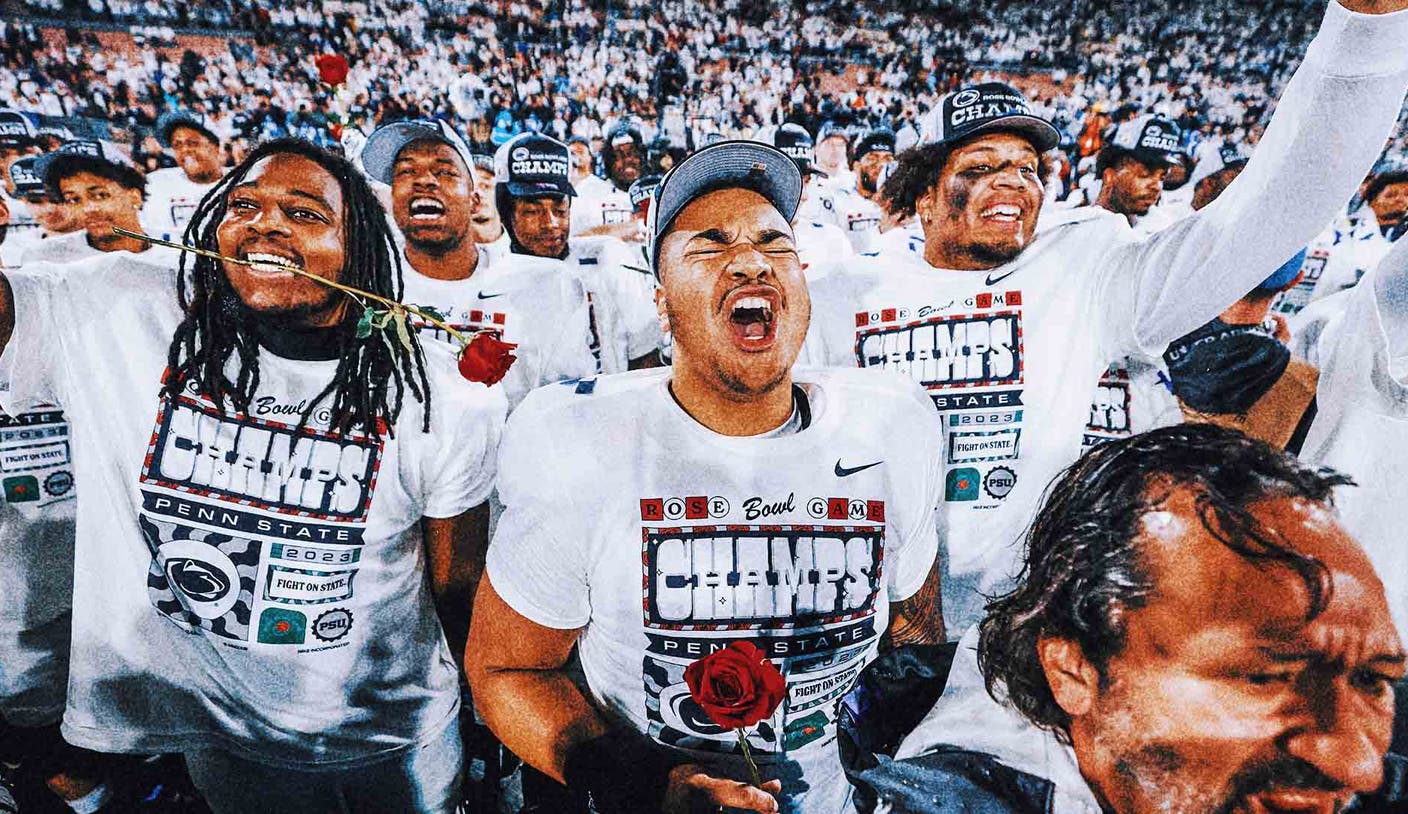 PASADENA, Calif. – Sean Clifford soaked it all in.

The Penn State quarterback had just given the performance of a lifetime and arguably one of his best in white uniforms that somehow shone even brighter despite the rainy conditions at the 109th Granddaddy of Them All on Monday night . His 16 completions for 279 yards and a pair of touchdowns were far from career highs, but each was among the most memorable of an up-and-down run that ended with a 35- 21 and securing the school’s first Rose Bowl win since 1995.

It was a fitting conclusion to an 11-2 campaign that was one of the program’s best in recent memory, and it came with a trophy to show for it. Clifford enjoyed every minute, from the crowd-pleasing scrambles to the deep shots he connected to the final trot down the field in the fourth quarter that carried those left among the poncho-clad 94,873 to applaud

Yet amid all the legitimate plaudits over the conclusion of a career, it was also hard not to imagine a more fitting passing of the torch for James Franklin’s side. Clifford deserves all the plaudits for the result, but it was his supporting cast stepping up in unison that might get Penn State fans even more excited about the future ahead.

One job done, another one ready to start.

“We talked about it. It gives us a lot of momentum. The standard of what we expect next year is well defined,” said defensive coordinator Manny Diaz. “Once you taste something like that, it’s hard to go back.”

High bars are nothing new for this program, which boasts national championships in the trophy cabinet and a Big Ten title won just a few years ago under its current head coach. What’s different this time, though, is what’s in place as eyes turn to a 2023 season where they could be favorites to win the league and make a return trip to Pasadena for the semifinal that will take place next year.

All you had to do was look around the Rose Bowl to see it all on screen.

Although Joey Porter Jr. was celebrating with his teammates afterward, the Nittany Lions didn’t seem to miss him as much as expected. Defensively, they held the Utes to just 45 percent passing and allowed just one big passing play until the final two minutes of the game. Outside of Ja’Quinden Jackson’s 19-yard touchdown run in the second quarter, a big-play offense was limited to just three runs of 15-plus yards.

Kalen King, who flew under the radar with Porter earning All-American honors, stepped up all year to lead the defense in pass breakups and will return after snagging one of the team’s two interceptions. Fellow sophomore KeAndre Lambert-Smith was an offensive star, recording the longest touchdown catch in Rose Bowl history when he crossed the goal line on an 88-yarder.

Then there are the young tailbacks everyone was talking about in 2022. Nick Singleton broke off an 87-yard touchdown run in which he was barely touched amid a 120-yard effort on just seven carries. Kaytron Allen chipped in with a touchdown run of his own and went on to give the Nittany Lions a pair of 1,000-yard freshman rushers on the season.

“It means a lot. At the beginning of the season, a lot of people didn’t have high hopes for us, they didn’t really have us winning anything,” King said. “But I feel like this season, and this win in particular, really pushed us to get off to a good start next year and bring more respect to Penn State as a program.”

Penn State’s lone losses in 2022 came to a pair of playoff teams in Michigan and Ohio State, the latter of which led in the fourth quarter. These teams face a lot of questions for the upcoming season, with several key players in the NFL or other starters leaving through the Transfer Portal.

Heck, who knows if Wolverines coach Jim Harbaugh will even be around at the start of next season, given how much his name has come up in connection with NFL job offers.

While Penn State must replace Clifford behind center, there is a groomed successor already waiting on the wings with game experience in former five-star Drew Allar. Those around the program know he has the physical tools to be even better than any of his predecessors, and optimism is high that the offense can adapt even better to his big arm.

“Winning only brings positive energy everywhere. We are a positive team,” remarked Allar. “We can’t worry about expectations. We just have to come in every day and work and let the results take care of themselves.”

The rising sophomore QB threw just one pass in the game, but knows what’s expected of him moving forward. He’ll take on the mantle of big man on campus with a pretty high bar to clear after the way Clifford finished the season.

Allar seems ready for it, though, excited even, and knows he’ll have plenty of help along the way. In addition to the plethora of skill position players who shined Monday night, potential first-round left tackle Olu Fashanu, who did not play in a game in which PSU averaged 8.3 yards per play, he already announced he would skip the NFL. Draft to return to State College for another round.

“I’m so proud of these guys,” said a more exuberant Franklin when he wasn’t hugging half his team. “I was here in 2016, one of the best Rose Bowl games, and I saw somebody else celebrate. And I wanted that for them. I couldn’t have scripted it any better.”

The script for what could end up being the last traditional Big Ten-Pac-12 Rose Bowl was certainly pretty good for everyone in Franklin’s corner. Even more exciting for those around the show?

“This was another showcase for next year,” Lambert-Smith added. “You’ll all see a little more of it.”

Maybe even more of all of them also won big games in 2023.