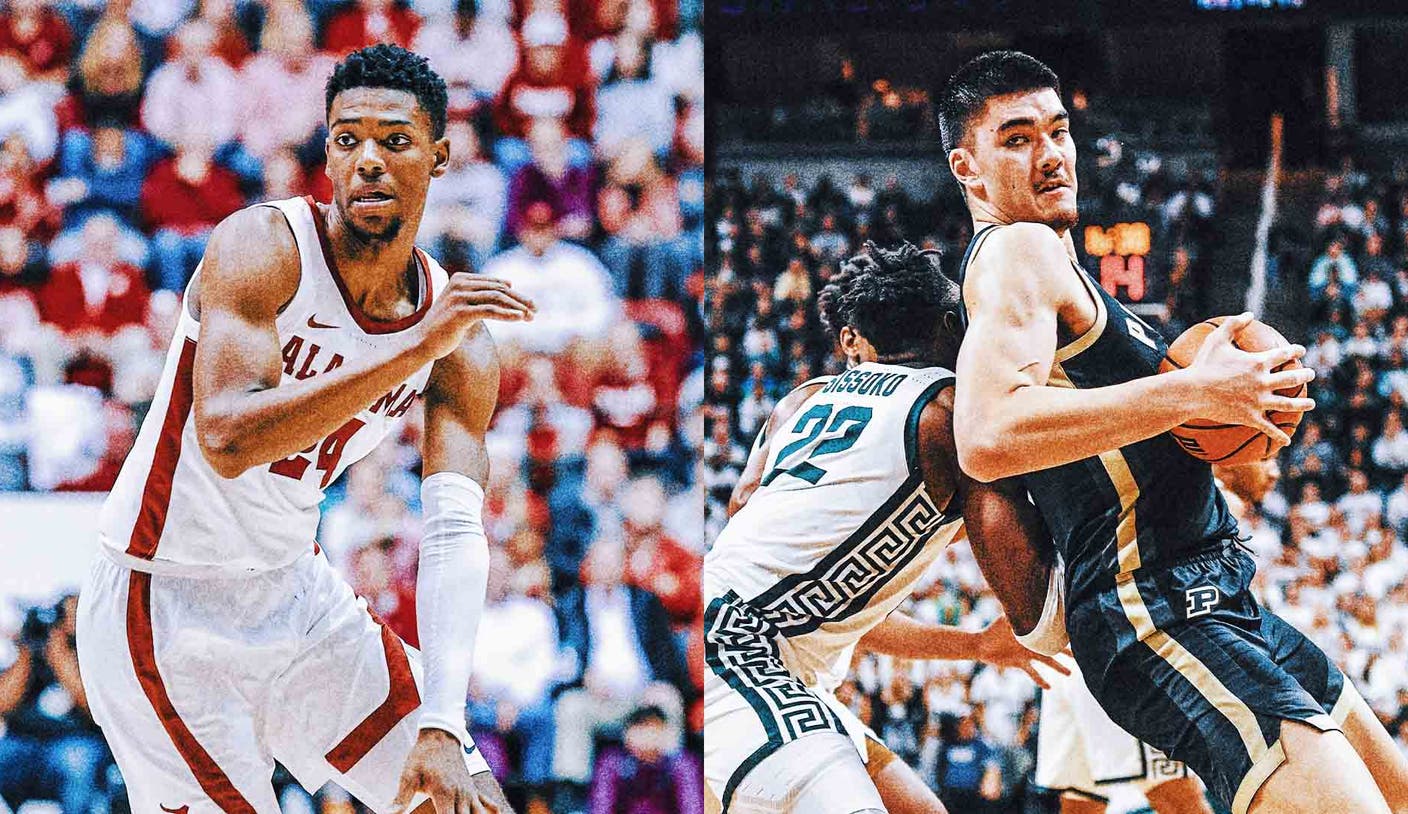 How many college basketball teams have the makeup to win the national championship in Houston this April?

It’s a rich fluke thing, but my top tier of the bunch would be Alabama, Kansas, Houston, UCLA and Purdue. Three of those teams lost this past weekend, and if that doesn’t sum up the current state of affairs in college hoops, I’m not sure what does. The sport is full of parity and chaos, and there are easily a double-digit number of contenders who could make it to the Final Four.

Chaos was felt at the Fertitta Center on Sunday evening as Temple defeated AP No. 1 Houston 56-55. It marked the Owls’ first win over a top-ranked team since 2000. For the Cougars, it’s a setback, but those aren’t the worst things to happen in the marathon through March. Honestly, since Houston plays in the American Athletic Conference, it leaves them less susceptible to losing compared to Power 5/Big East programs.

The most important element for Kelvin Sampson to figure out is his offense. Beyond Marcus Sasser and Jamal Shead, the Cougars didn’t get much from other sources. While five-star freshman Jarace Walker has two 20-point performances in his last four games, Sampson and his staff must find a way to get contributions from him on a more consistent track. In Sunday’s loss, Walker scored nine points but was 3-for-12 from the field. At just over 33% from beyond the arc, perimeter shooting is something that runs hot and cold for the Cougars. As good as they are defensively, at some point on the big dance floor scoring consistently becomes a necessity.

Back to our discussion of the double-digit number of possible Final Four contenders, one of those teams is TCU, yes, TCU. And no, I’m not just saying that because the Horned Frogs blew out Kansas on Saturday, 83-60, for the top-ranked road win in program history. Jamie Dixon’s team ranks in the top 15 in KenPom’s adjusted defensive efficiency while loaded with experience and an All-American-level shooting guard in Mike Miles Jr. With other seniors in guard Damion Baugh and forward Emanuel Miller in the equation, and a gang rebounding mentality, this team is really hard to stop when knocking down perimeter shots. In Saturday’s win over the Jayhawks, the Horned Frogs shot 8-for-15 from beyond the arc and six players scored at least eight points. Yes, TCU is 15-4, but three of those losses came by just a combined seven points. The Frogs will be a tough matchup, as Arizona learned in the NCAA Tournament last year.

Another story that reflects the randomness of the season? Gonzaga’s 75-game home unbeaten streak ended with a loss to Loyola Marymount. The Bulldogs also snapped a 116-game WCC winning streak over teams not named BYU or Saint Mary’s. Those numbers are ridiculous, but they also show that even a top-10 Gonzaga team doesn’t feel like the Zags’ teams of the past few years. And guess what, this team was ranked sixth in the AP poll last Monday.

While it was another week of change in college hoops, our power rankings actually have a No. 1 repeat for the first time in several weeks, and for good reason.

The Crimson Tide is doing something historic. At 7-0, Alabama has won all SEC games by double figures. Nate Oats’ team is the first to accomplish the feat in a decade, since Florida went 24-6 and reached the Elite Eight in 2012-13. Four of the Crimson Tide’s seven conference wins have come by at least 20 points, the latest coming in an 85-64 rout of Missouri on Saturday.

The Boilermakers are off to the best start to a season in school history, with Zach Edey leading the way in a win at Michigan State and then going for 24 points and 16 rebounds in Sunday’s win over Maryland. Edey’s season so far has been generational. Here are some tests:

The Wildcats pulled off one of the best moments of the week in sports, defeating Kansas in an overtime thriller in Manhattan, 83-82. It’s nothing short of amazing to see what this team has done this season behind Keyontae Johnson and Markquis Nowell. Jerome Tang would be my national coach of the year today.

Hey, you can lose in this sport. The Bruins won 14 straight before falling to an Arizona team that also cracks our top 10 this week. UCLA shot just 31 percent against the Wildcats, but only lost by six. In two games last week, Bruins guard Tyger Campbell combined for 35 points and eight assists. Mick Cronin has an All-American in Jaime Jaquez and an elite orchestrator as an engineer.

The Cougars’ quartet of Sasser, Shead, Walker and Tramon Mark shot a combined 13-for-48 in the one-point loss to Temple. Houston will look to bounce back Wednesday at UCF, which is coming off losses to USF and Tulane.

Winners of five straight, the Cavaliers have a great mix of experience while ranking in the top 25 in KenPom’s offensive and defensive efficiency. Armaan Franklin had 25 points and 10 rebounds in Saturday’s road win over an NCAA Tournament contending Wake Forest team.

The Vols had double-digit wins over Mississippi State and LSU last week, with Josiah Jordan-James scoring a season-high 22 points and Zakai Zeigler going for a double-double with 12 points and 10 assists in Saturday’s win about the Tigers.

The Longhorns showed something on Saturday, going into Morgantown with a 69-61 win over West Virginia. Marcus Carr has scored 20 points in two of the last three games, including 23 against the Mountaineers.

Azuolas Tubelis and Oumar Ballo are one of the best frontcourt duos in college basketball and they proved it again on Saturday. The Wildcats’ seniors combined for 30 points and 18 rebounds in a 58-52 win over UCLA.

The defending national champions still get the benefit of the doubt from me even after TCU ran over them Saturday, 83-60. As for the concerns for Kansas, giving up 42 points in the paint shows how thin they are inside, but you won’t see a Bill Self offense commit 17 turnovers very often.

Yes, the Horned Frogs clicked on all cylinders in a win over Kansas, but I’m also considering last week’s loss at West Virginia. The Horned Frogs shot over 50% from 3-point range and hit eight 3-pointers against the Jayhawks. That’s when they’re really hard to beat, but it’s not a consistent theme for this team. Against the Mountaineers, their offense wasn’t great beyond Miles, and WVU took away transition opportunities. I really like this team, but their offense needs to show me a little more.

The Golden Eagles have the No. 1 offense according to KenPom, and while they’re currently second in the Big East, their remaining schedule is the easiest of the top teams. This team is the favorite in the conference, which is pretty wild to think about. Kam Jones is a hotshot as he scored 22 points to lead a 74-53 win at Seton Hall as the Golden Eagles forced 26 Pirate turnovers.

The Cyclones suffered a two-point loss at Oklahoma State over the weekend after an 11-point win over Texas earlier in the week. After his 21 points powered Iowa State past the Longhorns, Jaren Holmes was shut out by the Cowboys, going 3-for-13 from the floor.

Even though the Musketeers fell at DePaul on Wednesday, this is a team that remains atop the Big East at 8-1 and has won 12 of its last 13 games. In Saturday’s win against Georgetown, Zach Freemantle had 30 points, 11 rebounds and seven assists. Next up for Sean Miller’s team? A top-25 battle at Gampel Pavilion against UConn on Wednesday (6:30 p.m. ET on FS1 and the FOX Sports app.

The Bears have won four in a row. Two of their Big 12 losses, TCU and Kansas State, were by a combined three points. In Saturday’s 62-60 win at Oklahoma, Adam Flagler led the way with 16 points and five boards, while Flo Thamba highlighted a 39-30 rebounding edge with 10 boards. Baylor has a golden opportunity Monday night in a home game against Kansas as the Jayhawks look to snap out of their skid.