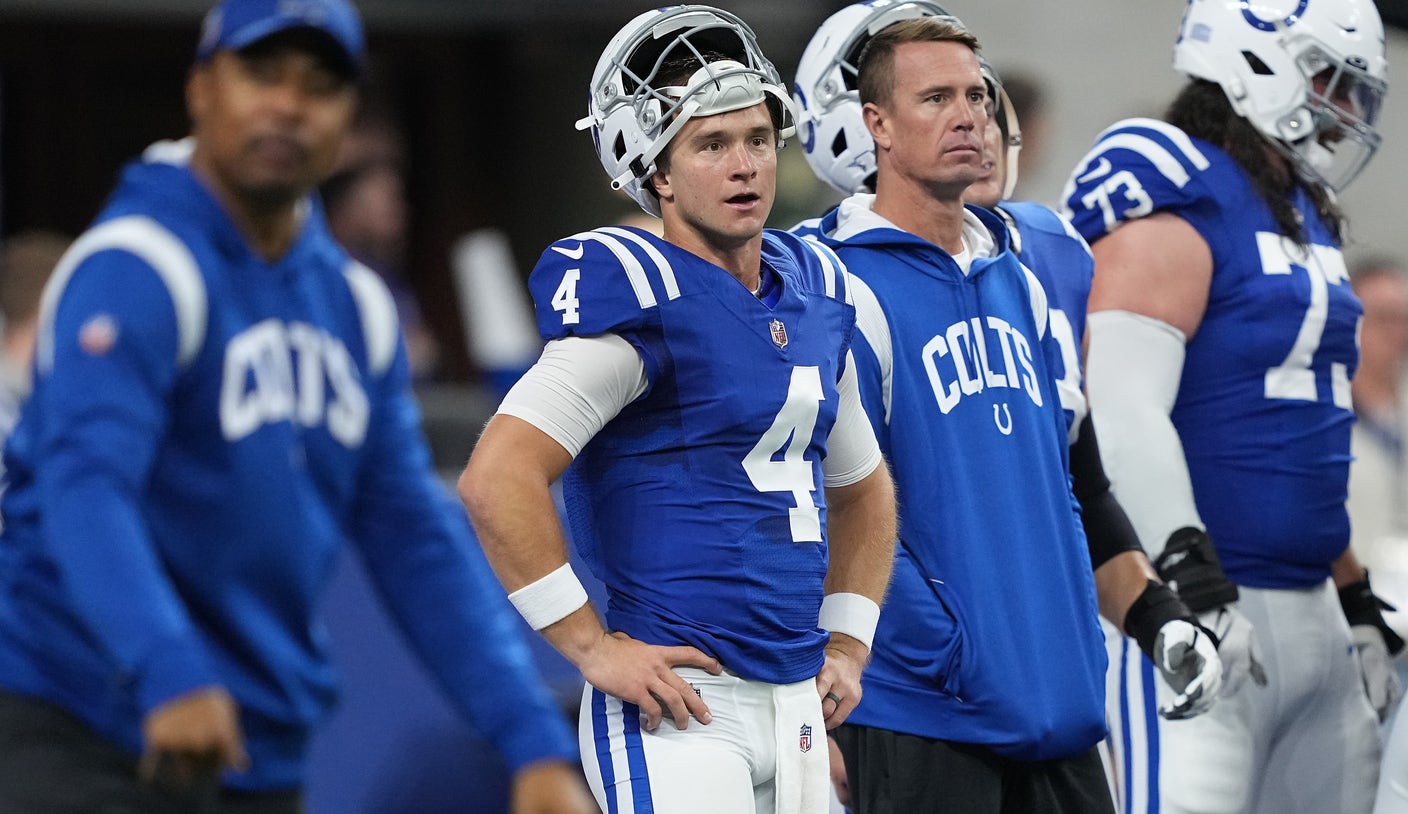 The quarterback was benched for a sixth-round pick. The offensive coordinator fired. A superior offensive weapon traded.

That’s just in an eight-day span for the Indianapolis Colts (3-4-1), who are undergoing drastic changes for their struggling offense.

What does all this mean?

Breaking down the ramifications and optics of this week’s Colts-centric AFC South moves:

At least, it seems that way until — or if — the Colts can come up with a legitimate reason why he was fired.

The Colts “relieved” Brady of his offensive coordinator duties on Tuesday, a role he had held since last season following the departure of Nick Sirianni, who became head coach of the Philadelphia Eagles.

“This was an incredibly difficult decision, but I felt it had to be made in the best interest of the team,” Reich said in a statement. “I appreciate Marcus’ commitment to the organization, and he made a significant contribution to our offensive success over the past five seasons. I wish him the best moving forward.”

The Washington Commanders defeated the Indianapolis Colts 17-16 behind a game-winning drive led by Taylor Heinicke.

Brady’s firing is puzzling, considering Reich is the Colts’ go-to guy. Brady helped with the offensive game plan and game design, and while there’s a lot more to it than the average fan understands, it begs the question: How much really changes with Reich even in command? Reich will assume offensive coordinator duties for the rest of the season.

Colts owner Jim Irsay has already given Reich (and general manager Chris Ballard) a vote of confidence, telling ESPN on Sunday that he has not considered firing him. But Reich’s offense has also been terrible, tied for worst in turnovers (16), third-worst in scoring (16.1), second-worst in first-half scoring (42 points for the season), third-worst in efficiency in the fourth quarter (28.6). %) and 26th in red zone efficiency (47.6%). So something had to change. Indianapolis chose that to be Brady’s employment status with the franchise.

After last season’s disappointing finish, a stunning loss in the regular season finale to the Jacksonville Jaguars that ended their playoff hopes, the Colts pointed the finger at Carson Wentz. They traded him to the Washington Commanders, just a year after acquiring him from the Eagles. Irsay would later tell owners meetings that trading for Wentz was a “mistake.”

Seven games into this season, the Colts pointed the finger at Matt Ryan, Wentz’s replacement and the guy they pointed to as the missing link to a Super Bowl run. Of course, Reich acknowledged that the team didn’t hold up its end of the bargain in giving the 37-year-old an elite game and pass protection. But pulling the plug on him before the halfway point of the season showed that Indianapolis doesn’t trust the veteran to pull the offense out of the abyss. That he is part of the problem.

And now, the Colts are pointing the finger at Brady, an offensive coordinator who didn’t call plays.

When will the finger be pointed at Reich?

Could Ehlinger be the Colts QB1 of the future?

It’s hard not to come away impressed with what Sam Ehlinger did in his first career start with the Colts.

The Colts’ offense found a way to excel again in Sunday’s 17-16 loss to the Commanders, Indianapolis’ second straight loss. But the second-year pro, with the weight of the Colts’ season on his shoulders, didn’t mess around. He showed poise and mastery of the attack. For the most part, he looked comfortable in the pocket, which was one of the big question marks for team watchers. He stepped up in the pocket when he needed to and made some good throws on the move. According to Reich, all but one shot he took on the field was on goal.

His best throw of the game: On second-and-14 from the Colts’ 19 in the third quarter, he connected with rookie receiver Alec Pierce for a 44-yard run down the numbers.

“I thought Sam (Ehlinger) looked good,” Reich said after the game. “I think we were all sure we were going to see it, but you could feel it. … We weren’t panicking on the sidelines.”

But the Colts didn’t make enough plays to help the former Texas standout.

Two plays after that deep connection with Pierce, star running back Jonathan Taylor fumbled the ball. And in a difficult situation for even the best quarterbacks, down by one with just 19 seconds and a timeout remaining, Ehlinger gave Indianapolis a fighting chance. He threw a big fastball to Michael Pittman Jr. by the central part. But the Colts’ leading receiver dropped the pass.

The defense didn’t help either. After holding the Commanders to seven points through three quarters, he gave up 10 points on back-to-back possessions of more than 80 yards late in the final period.

Ehlinger wasn’t perfect. There were some throws he probably wants back, including a near-interception in the first quarter. He had a bad play inside the red zone at the Commanders’ 17 in the second quarter, where he appeared to lose his grip on the ball when trying to pull and run under pressure.

But there was much more good than bad.

Considering the sequence of events that led the Colts to Ehlinger, who had never attempted a pass in an NFL regular-season game until Sunday, that’s pretty impressive.

“Obviously, you never know what to expect until you’re in there and the live bullets come in,” Ehlinger said. “I think now I know what it’s like to play a regular season game. I think there’s a lot of potential for growth, which I’m excited about. There’s a lot of things to clean up and things to do better. There’s There’s a lot of opportunity out there . I really want to keep growing and improving.”

After an encouraging first start for Ehlinger, there’s a lot to unpack with the Colts’ quarterback situation. Reich has already said Ehlinger is the starter for the rest of the season. But will Ehlinger continue to ascend with more reps? One game certainly won’t dispel the uncertainty over his future at the position.

Even if he plays well the rest of the season, is that enough to earn him the job for 2023? Who knows. Maybe the Colts don’t even know.

There is a strong case for the Colts to take a quarterback in next year’s draft regardless of how Ehlinger plays. But consider this: Will the Colts be bad enough to land one of the top quarterbacks? The defense numbers strong regardless of how Ehlinger and the offense perform. If the season ended today, Indianapolis would have the 15th pick in the draft, maybe not that low, but certainly not high enough to land one of the blue chips at quarterback.

For now, the Colts will try to hang their hat on an offense that keeps shooting itself in the foot, that has potential. He was at hand against the commanders. Like the 47-yard completion to Pierce. And Taylor’s 27-yard run in the first quarter. And the 38-yard screen pass to Parris Campbell.

“We showed we could be an explosive offense,” Ehlinger said after the game. “We had some explosive plays. We just have to keep building from here.”

Ehlinger will have a chance to do just that.

Hines will be missed on the Colts, but he was also underutilized

By trading running back Nyheim Hines to the Buffalo Bills on Tuesday, the Colts lost their versatile No. 2 option behind All-Pro Jonathan Taylor.

Since being selected in the fourth round of the 2018 draft, Hines has proven to be a threat in the run and pass game in addition to punt return skills. He has 1,725 ​​receiving yards over the last five seasons, fifth most among running backs.

But the reality is that Hines was also underutilized in the Colts’ offense. He was playing a career-low 30 percent of his offensive snaps this season. He had just 18 carries for 36 yards, an average of two yards per carry, in seven games this year playing behind arguably the worst offensive line in football. He had just 46 carries in 2021, a drastic drop from 2020, when he had 89.

For Hines, who was reportedly open to a trade, it’s starting over with a Super Bowl contender who figures to use him heavily.

The Colts, in return, got running back Zack Moss and a conditional 2023 sixth-round pick that can be converted into a fifth-rounder. Indianapolis was unable to give Hines the role he likely deserved and flipped him for a draft pick backup who will compete with Deon Jackson, who has shown when given the opportunity, for a role of RB2 that becomes less significant with Taylor’s workload piling up afterward. a two-game absence due to an ankle injury.

Moss is also a much cheaper backup, playing on a rookie deal. Hines had signed a three-year, $18.6 million extension with Indianapolis in September 2021.

For those reasons, the Colts’ return to Hines wasn’t bad, even if it stings some fans.