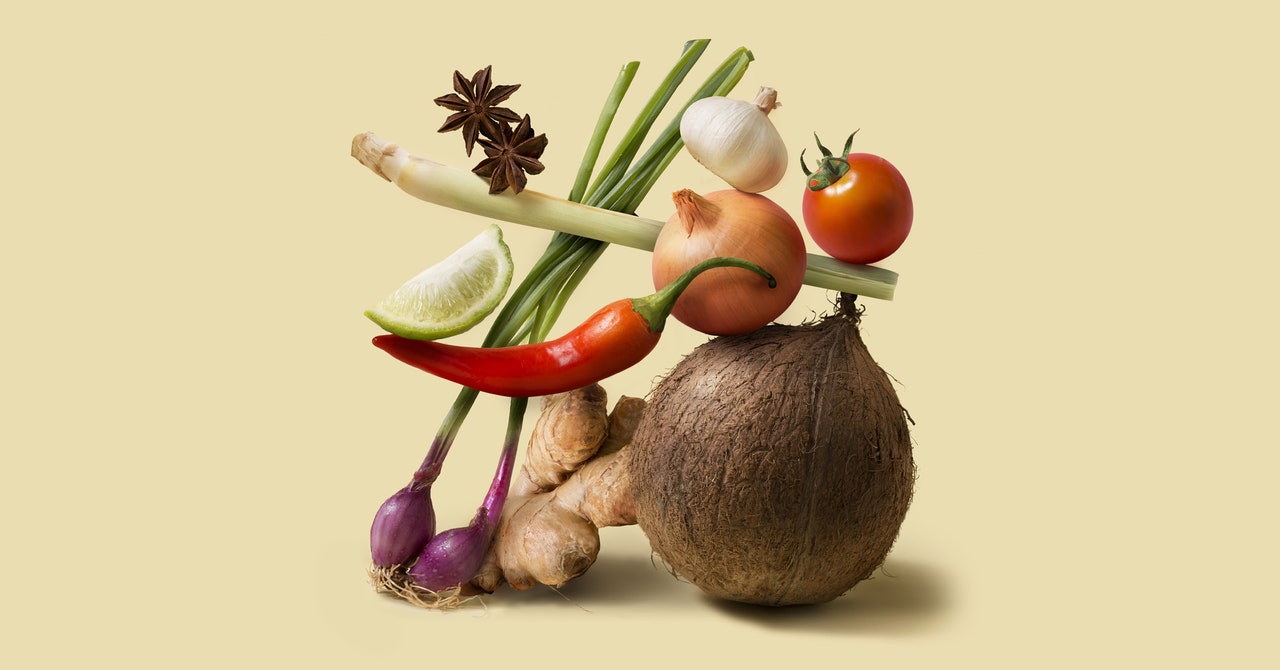 I also noticed something funny that I cross-referenced with Elisabeth, showing her some of the meals Chang presents in the book: descriptive instructions with mostly ingredients less quantities (underlined and cleverly colored to make them pop) all hidden in meaty paragraphs.

“They are recipes in prose form,” he said. “Is it useful?”

I tried to answer that question by making Chang’s no-recipe recipe for shrimp with corn and potatoes, where the potatoes are baked with bacon, onion, and garlic and then get a drizzle of miso or some chaat masala. It’s a fun and flavorful dish, with an unspoken confidence in a home cook’s existing skills to get over the finish line. The potatoes, diced to the size shown in the photo, took much longer than the five minutes it says they need to cook, and although the bacon I used had plenty of fat, it didn’t do enough to cook the onion and potatoes as the recipe implied it would. I also found myself reverse engineering the recipe to prepare things and figure out quantities.

Similarly, Chang’s Microwave Eggplant Parm turned out as you might expect an “eggplant parm of the week” recipe to, but in this case it was more demanding. The recipe calls for “a few” eggplants cut into half-inch-thick discs, arranged on a baking sheet, and mashed for five to ten minutes. My microwave is a small but mighty GE that we’ve dubbed Sparky Jr., and while microwaves can be great kitchen helpers, cooking this amount of eggplant was a pain in the butt. I was forced to make several rounds on different dishes, a problem I think almost everyone who tries this recipe has. (Sparky Jr. is small, but no this small.) Finally, though, I layered it all in a baking dish (Chang and Krishna suggest an oven-safe pot of indeterminate size) and 30 minutes later, we had a great dinner.

I had had enough of this book, but just to make sure I was reading things correctly, I DMed a fellow food writer.

“I hate that ‘over the counter’ shit,” he replied. “Recipes, when well written and edited, are designed to be clear instructions to get you to a specific destination. Why is that a bad thing?”

There’s a good book in here somewhere, maybe something called David Chang’s kitchen of the week. But being cloaked in the over-the-counter format just makes it fall.

The New York Times cooks recipes without recipes by Sam Sifton, on the other hand, is sleek and nimble. Wrapped in bright red fabric and about the size of a chunky iPad, it’s packed with low-effort, high-reward foods. Outside of the table of contents, there are exactly four pages of text before diving into the recipes, and three of them suggest good things to have in the pantry.

I came to think of the book as a collection of good ideas for people in a hurry who know how to cook and just want some guidelines.

And these “recipes?” They’re still recipes, with a classic (super short) header, an ingredient list, and a procedure, all pretty simplified. Amounts are usually at your discretion. I came to think of the book as a collection of good ideas for people in a hurry who know how to cook and just want some guidelines.

One cool night when I didn’t want to go to the supermarket, I made anchovy butter, mixing a can of salted fillets into a stick of soft butter with some minced garlic, red pepper and lemon. This was spread on toasted homemade bread, topped with a hard-boiled egg, and Elisabeth and I washed it down with a glass of cava. For a moment, the news of the world faded away and all was well.