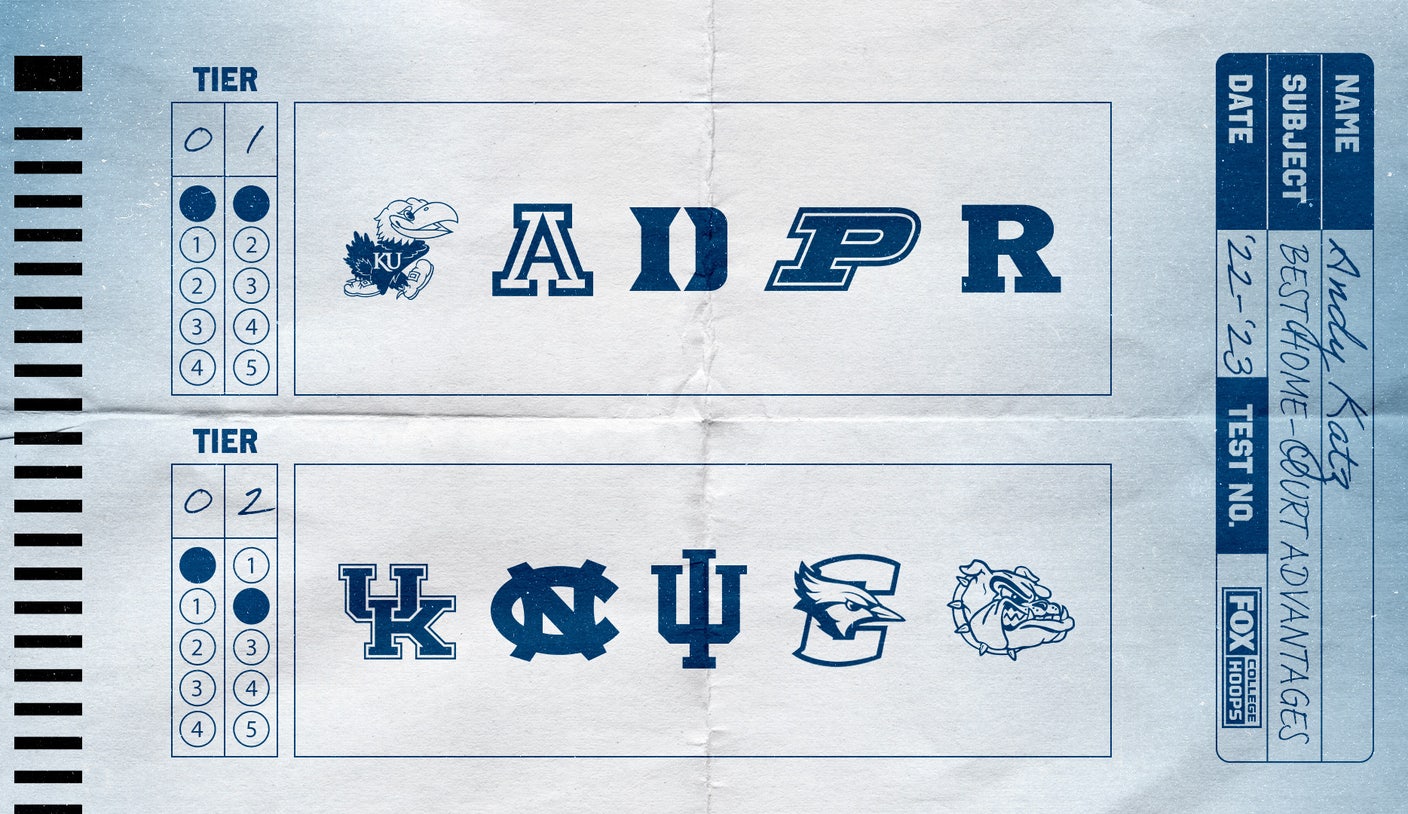 There is no other sport that can create a true edge on the court like this college basketball?

Whether it’s the frenzied fans belting out the school’s chants at the top of their lungs or the simple intimacy of a stage that’s been around for over 50 years, there’s something special about experiencing a college basketball game.

Schools like Kansas, Duke and Kentucky are known as blue-blood college basketball, but they are also known for having exceptional fans that can create a massive home advantage.

With that said, it’s time to check out my list of the best atmospheres in college hoops.

FOX Sports’ Andy Katz breaks down which schools have the best home court advantages in the country, breaking them down into five tiers.

Level 1: The best of the best

Kansas: I love everything about the Phog. The intimacy the atmosphere I have never been disappointed with a Kansas experience. The fans show up regardless of the opponent. And of course, you can’t leave there without having “Rock Chalk, Jayhawk” ringing in your ear.

Arizona: The McKale Center doesn’t get the respect it deserves. I would put the Arizona fan base against anyone in the country. The Wildcats always perform well in Tucson, as well as whenever they play in Las Vegas or on the West Coast during the NCAA Tournament. This is one of my favorite places that never gets national love.

duke: This is a blue sauna. I don’t care what the temperature is outside because Cameron is always hot. Students – undergraduates and graduate students – are always in force. There is not a bad view in the house. Covering a game in Cameron can be suffocating because of how close the fans are to the media. Still, Cameron never seems to shut down. It’s always on.

Purdue: Mackey Arena has become my favorite in the Big Ten over the past five years. That has coincided with the Boilermakers being a Big Ten contender. The noise bounces off the metal domed ceiling and creates a cauldron of noise. The Paint Crew always comes out en masse. Black and gold are imposing, strong and cultured fans. Mackey’s raised seats also lend an intimidating feel.

Rutgers: Jersey Mike’s Arena, formerly the RAC, is one of my favorites. Steve Pikiel has helped create one of the best environments in college basketball. Rutgers has been victorious at times, but only if the Scarlet Knights are away. The atmosphere never goes down. The fans are very passionate and Jersey strong. The student section has been tremendous in recent seasons.

Level 2: Next in line

Kentucky: Normally, Rupp Arena and Big Blue Nation are a combination that makes winning in Lexington nearly impossible. But South Carolina just went in and won. So, maybe for this season, I’ll put Kentucky in Tier 2.

North Carolina: The Smith Center has traditionally been one of the toughest places to get a win in the ACC. There have been some defeats at home, but the crowd tends to be on their game. Again, this is a place that has never disappointed me.

Indiana: I know the Hoosiers lost at home, but when the Auditorium, which it always will be for me, is turned up, there are few better arenas. I was there for the win over North Carolina and the atmosphere was top 10. Bloomington is very noisy. I’m not a big fan of how the stands go up and out instead of flying over the track. Still, you can’t argue with the noise.

Creighton: Creighton fans show up in force. The CHI Health Center is consistently one of the busiest arenas for men’s college hoops. Creighton has been a winner this season, but largely because of injuries. The home loss to Nebraska was surprising at the time. Still, I’d take Creighton home most nights.

Level 3: On the rise

UConn: UConn fans have grown passionate about their team, especially the last two seasons. But the problem is that they split their games between the Gampel Pavilion and the XL Center. Gampel’s games aren’t as crazy at the XL Center.

providence: The Amp, formerly the Dunk, has become one of the best environments in the Grand Est. The Friars are in every game at home thanks to their huge home court advantage.

State of Michigan: Izzone has always been a constant. The team is traditionally competitive. And beating the Spartans in East Lansing is always a task.

State of Iowa: I know, I know, the Hilton Coliseum should be taller. But I’m a little embarrassed to say that in three decades I’ve never been. For whatever reason, I’ve always seen the Cyclones on the road or neutral tracks. I’m sure I would upgrade to Hilton after a visit.

Arkansas: Just like I’ve never made the trip to Hilton Coliseum, I’ve never been to Bud Walton Arena either. Not going to Hilton and Bud Walton is a major miss for me. Somehow both areas have eluded my travels.

Level 4: It’s hard to keep them this far

San Diego State: Viejas Arena, which features The Show, has become one of the best student sections in the country. They are creative, strong and in the game in every possession. I was there for the home win against BYU during the first week of the season, and you would have thought it was late February. The passion is real.

Xavier: Sean Miller entered a great local track at Cintas. He knew that since he had trained there before. But it seems to be even more imposing now.

New Mexico: The Pit is back. I covered UNM in the early 90s when the Pit was in its prime. The Pit is a mile high and stronger than… These are the words as you go down the ramp into the Pit (it’s built into the ground). Having a sold out Pit is one of the best advantages of the local track in the country.

Illinois: The State Farm Center is one of the best in the country when it’s on the move. The Orange Krush, which is the school’s student section, is a great idea with the Illini orange-clad fans.

Wisconsin: The Kohl Center has lost a bit of its imposing character. The Badgers aren’t as automatic as they once were. I’m biased. I loved the old Field House.

Tennessee: I know Vols fans will be all over the place for having Tennessee so low. But I always thought the arena was too big to match with Rupp. Having it more intimate would have made more sense.

virginia: Getting to the John Paul Jones Arena is also on my list. For some reason, I have been absent at this road change. But I’ve heard wonderful things about a full UVA house.

Texas Tech: I went to Lubbock during the Bob Knight era. The atmosphere at the United Supermarkets Arena was good then. It’s even better now.

Auburn: Bruce Pearl has made Auburn basketball important again. Relevance has coincided with a little hidden gem in the SEC.

Kansas State: When Bramlage is swinging, the Wildcats are tough in Manhattan. That could be the case this season as the team is off to an impressive 15-1 start.

Marquette: The Golden Eagles faithful have made the Fiserv Forum one of the toughest places to get a win in the Big East.

Andy Katz is a longtime college basketball writer, analyst and host. It can be seen on the Big Ten Network as well as March Madness and NCAA.com, and hosts the “March Madness 365” podcast. Katz worked at ESPN for nearly two decades and, before that, in newspapers for nine years.