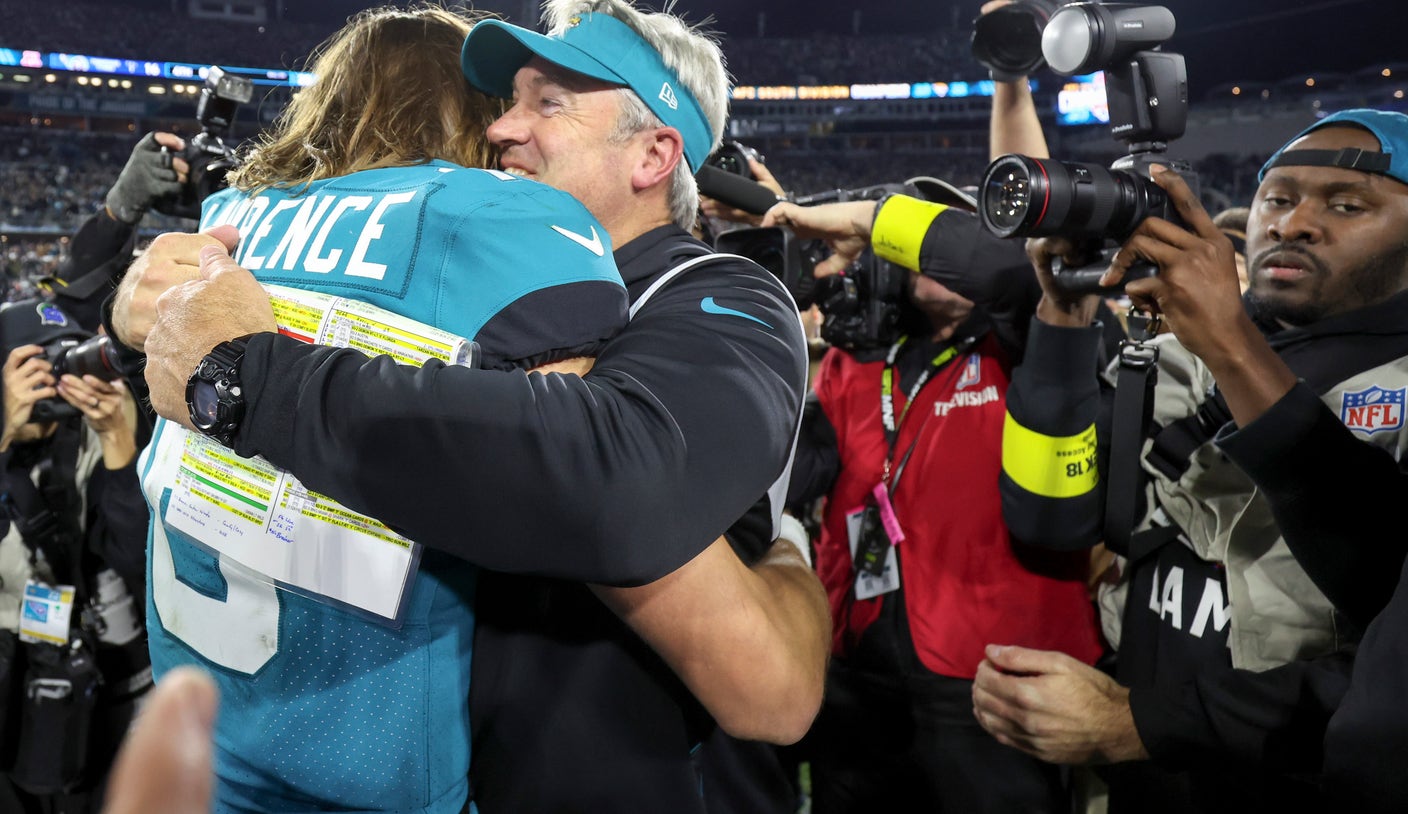 After the Jaguars won the AFC South title Saturday night, speaking at the podium inside TIAA Bank Field, outside linebacker Josh Allen was asked if it felt surreal to even be in that moment. Considering all the losses from previous seasons. Considering the team’s winless streak in October. Given the 2-6 start to the season.

Allen’s response? A resounding “no”.

His words showed how quickly Doug Pederson has changed the culture of Jacksonville, historically not one of the most relevant franchises in the NFL. Before playing a game, the Jaguars knew things were going to be different, and then they manifested that reality.

That’s why Pederson should be the favorite for 2022 NFL Coach of the Year.

In his first season coaching the Jaguars (9-8), Pederson produced arguably the most improvement of any team in the league. He led Jacksonville to its first AFC South title since 2017, going from last in the division the previous four seasons to first. The team also increased its win total by six this season (nine in 2022; three in 2021), tying Detroit for the most improvement in 2022. The Jaguars’ six-win increase was the most of any team with a new coach.

Pederson’s coaching duties have shown in how the team has handled adversity. Despite winning just two of their first eight games, the Jaguars went 7-2 to end the regular season. Jacksonville joined the 1970 Bengals and 2020 Commanders as the only Super Bowl-era teams to make the playoffs after starting a season 2-6.

Not only weren’t the 2022 Jaguars derailed by the bad start, but they’re building momentum into the postseason under Pederson. The Jaguars are just the fifth team in NFL history to reach the playoffs in a season with a win-loss streak of at least five games, according to The Associated Press.

“If you’re not aligned with what your leader is saying, it’s hard to go anywhere,” quarterback Trevor Lawrence said earlier this month. “It’s the same person every day, whether we’ve won or lost, we’ve lost five in a row, we’ve won a lot in a row, it’s the same every day, and I think that’s something we’ve all picked up.”

One of the biggest things the former Eagles coach has done is spearhead Lawrence’s rise.

Emmanuel Acho and LeSean McCoy discuss who they have more confidence heading into the playoffs between two quarterbacks starting against each other: Chargers’ Justin Herbert or Jaguars’ Trevor Lawrence.

A generational prospect coming out of Clemson in 2021, Lawrence struggled and threw a league-high 17 interceptions as a rookie. But he’s hit his stride since the middle of this season, playing like a franchise quarterback and operating Pederson’s offense at a high level.

Under Pederson, who is the offensive playmaker, Lawrence has experienced one of the biggest year-over-year improvements for a quarterback in NFL history. According to NFL Research, he is just the second signal caller since 1950 to double his wins (nine this year; three last year) and passing touchdowns (25 this year, 12 last year) and reduced the his interceptions in half (eight this year, 17). last season) from one season to the next, joining Drew Brees (2003-04).

“The way we communicate, whatever the situation is, ‘Hey, this is an opportunity to make a shot,’ or ‘let’s be smart, make a finish, keep the chains moving.’ Whatever it is, he makes a good job reminding me of some of those things,” Lawrence said in December. “Now that it’s gone further and further, it doesn’t have to do as much because we’re on the same page.”

One of the first things Pederson did when he became the Jaguars’ coach was build trust with the team. It had broken, he said.

During the offseason, Pederson’s main goal was to make sure the players got to know him, so they could see him as someone they could trust. He was open and transparent with them.

“As we got into it, I think that’s when their tension can ease a little bit and they got more comfortable with who I am and who I was at that point, and that just builds,” Pederson said. “It just builds from there. As honest as I can be, and I’m going to be honest with them in a way that, from a correctness standpoint, right on the field. I’m going to be honest with them if they act off the field. I’m going to continue presenting the same message all the time, and I think he slowly earns his trust as we head into training camp and obviously during the season.

He thinks that’s why the team is in the playoffs. The confidence, he believes, prepared the team to face the challenges of their roller-coaster season.

“I just connect with everybody,” wide receiver Christian Kirk said Saturday of his coach. “He connects with everyone in the locker room. He treats us fairly and keeps his word. He’s always thinking of us, and he puts us first. Having a coach like that always put you in the right position to succeed, it’s pretty easy to buy into him “.

The race for coach of the year 2022 will be tight. Kyle Shanahan has the 49ers cheering, thriving with their third-string quarterback in rookie Brock Purdy and riding a league-leading 10-game winning streak. First-year coach Brian Dabboll has the Giants in the playoffs for the first time since 2016. Nick Sirianni led the Eagles to 14 wins. Dan Campbell led the Lions to a six-win improvement.

But the Jaguars’ irrelevance before Pederson’s arrival, along with a division title in an up-and-down season and helping Lawrence’s historic improvement, give the Super Bowl-winning coach one of the strongest, if not the strongest, for the prize. .

“I think 100 percent the coach should be in the conversation and could win the award,” Lawrence said on Jan. 4. “Look at what he’s done here, the energy, not just the Xs and Os and football stuff, but just the energy, the culture that we’ve created here. Obviously, he’s played a huge role in bring here. It’s hard to do, especially the first year and a lot of new people. I can’t say enough about the job he’s done. and how much I enjoy playing with him and appreciate him.”